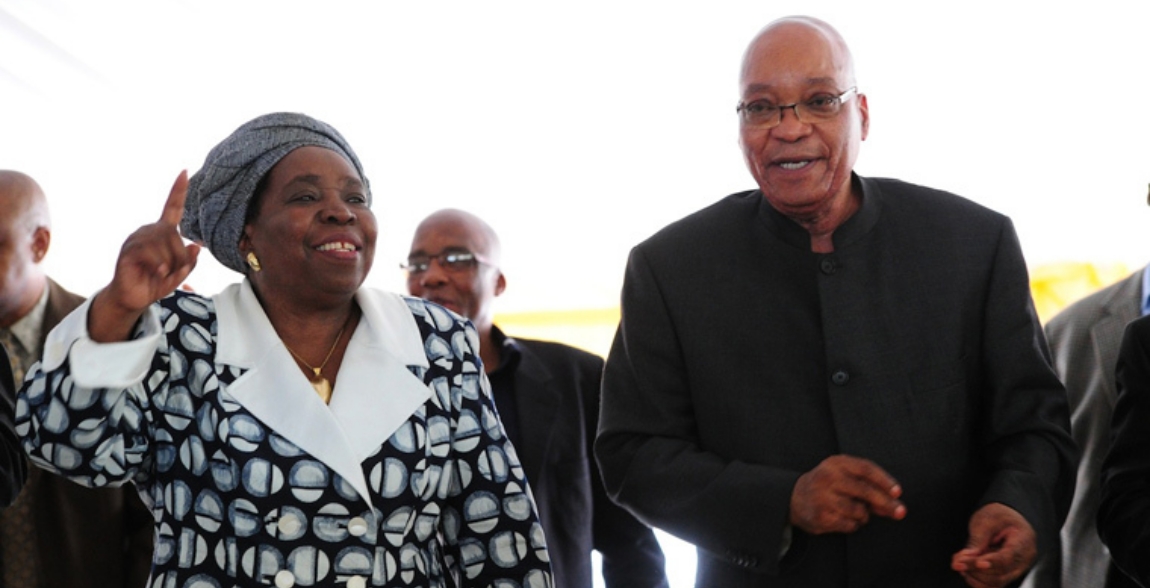 This week, African National Congress (ANC) national executive committee member Edna Molewa wrote an open letter calling out the â€œZuma’s ex-wifeâ€ narrative that has surrounded ANC presidential hopeful, Dr. Nkosazana-Dlamini Zuma. While this problematic narrative has persisted in the media without a doubt, there is also no question that Dlamini-Zumaâ€™s political alliances – especially the one with President Jacob Zuma – should be looked at.

Nkosazana Dlamini-Zuma is definitely much more than Zumaâ€™s ex-wife. And The Daily Vox has called out that narrative. She is a qualified doctor, anti-apartheid activist and head of the African Union Commision for one term, though her record there was a bit spotty.Â  In short, she is clearly a person in her own right who has achieved a lot on her own.

However, in spite of acknowledging all this, there also needs to be an acknowledgment that Dlamini-Zumaâ€™s alliance with Jacob Zuma is worrying. Not least of all, because Zuma seems to be pushing for her to take over. (And no, itâ€™s not because JZ is a closet feminist and wants the first female ANC and South African president – his motives are much more sinister.)

Way back in May this year, President Jacob Zuma publicly endorsed Nkosazana Dlamini-Zuma to take over the ANC presidency when his term ends this December. He reiterated his support for Dlamini-Zuma during the 2017 August Womenâ€™s Month celebrations. This caused much criticism from ANC leadership because official campaigning had not even begun. However, Zuma seems to determined to make sure that Dlamini-Zuma takes over from him, which raises the question: why? What exactly does Zuma have to lose if any of the other ANC presidential hopefuls take over, with the latter scenario seeming increasingly likely with Cyril Ramaphosa taking an early lead as the ANC branches begin voting.

Writing in August, political analyst Justice Malala said that NDZâ€™s plan if she gets elected ANC president mirrors Zumaâ€™s plan, which is talk of radical economic transformation without any solid strategies on how to achieve that. In short, Malala says Dlamini-Zuma will be carrying on with the rhetoric of the Zuma administration if she becomes the next ANC president and this could â€œbe an absolute disaster for the poor of South Africa.â€ So is that what Zumaâ€™s endorsement of Dlamini-Zuma is really about: ensuring that â€œhis legacyâ€ continues even when he no longer holds office? Legacies such as evading the 18 corruption charges against him and having to answer to the public protectorâ€™s state capture report. Zuma seems to be indicating that he will only answer to a commission of inquiry, not the public protector. With NDZ as possible ANC president and president of the country, this could be possible.

Professor Tinyiko Maluleke, a political analyst, says that while there is much speculation about the reasons why Zuma prefers Dlamini-Zuma as the next ANC president, there is no way of establishing the veracity of these speculations.

However, Maluleke says Dlamini-Zuma needs to be able to define her presidential campaign outside of the shadow of Zuma or anybody else. This appears to be a sticking point in Dlamini-Zumaâ€™s campaign: her inability to create a policy and campaign that clearly says it is her own. And if Dlamini-Zuma cannot even define her plans for the ANC, how will she be able to create meaningful policies of her own if she becomes the next president of the country?