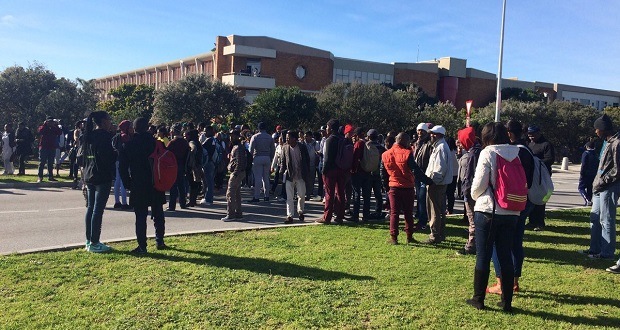 On Tuesday morning, students at the Nelson Mandela Metropolitan University (NMMU) campus blocked various entrances to the university in an attempt to shut down the campus.

SRC president Yusuf Cassim told The Daily Vox that the protest was led by the South African Students Congress (Sasco) and should not be confused for a Fees Must Fall protest. â€œItâ€™s just SASCO people that are part of the protest, some of them are not students at NMMU. Theyâ€™ve tried to shut down the university ahead of the mass meeting with students today and students did not want this protest; they were unaware of it,â€ said Cassim.

NMMU students are now given an opportunity to voive their suggestions to resolve the matter #FeesMustFall pic.twitter.com/HOV1L74DO4

The NMMU SRC had called for a mass meeting on Tuesday to consult with students and get a mandate on an approach to â€œfree education for the poor and a 0% increase on feesâ€.

Sasco leader Siviwe Nqaba confirmed that the protest was not a Fees Must Fall protest but rather, a protest for free quality education. â€œFees must fall was about a 0% increment on tuition fees; weâ€™re saying free quality education for the poor. The message to shut down all institutions of higher learning was communicated by the provincial committee of SASCO in the Eastern Cape,â€ said Nqaba.

Nqaba said that other SASCO branches in institutions of higher learning are expected to join the protest tomorrow.

â€œWe do this not out of hooliganism or boredom, but out of our understanding that our continuous call for free education has long been delayed. We are of the view that students cannot continuously engage in a struggle of no fee increment, as this doesnâ€™t make universities any more accessible to the poor as they were in the past. Although we appreciate the strides taken by the democratic government of South Africa, as led by the African National Congress, in introducing the National Studentsâ€™ Financial Aid Scheme (NSFAS) in order to make these institutions more accessible to the poor, we are also in touch with the reality of inadequate funding that we are faced with,â€ said the Sasco NMMU in aÂ  statement on Facebook.

Protestors will submit a memorandum of demands to the minister of higher education because â€œthe protest is not against the universityâ€.

Sasco urged university management, academic and support staff, students and the community to join the shutdown of all campuses of the Nelson Mandela Metropolitan University.

The university could not be reached for comment but said in a statement that all academic activities and tests scheduled for today have been postponed, including on the Missionvale and George campuses. The campuses will however remain open.

The university said it is engaging with students, including discussions with the Sasco leadership regarding the call for a national shutdown.

The mass meeting between the students, SRC and university’s management has been moved to the Second Avenue campus and will is going ahead as planned.

Are you a student at NMMU? Tweet us @thedailyvox, email us at thedailyvoxteam@gmail.com, or Whatsapp us on 0764305905.