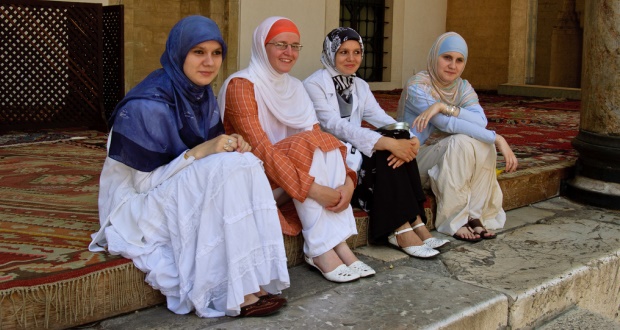 Twitter is awash with commentsÂ about #NoHijabDay, a supposed international day of solidarity inviting â€œall men and women, non-Muslim and Muslimâ€ toÂ notÂ wear headscarves as part of observing hijab Â – the Islamic practice of dressing modestly, on 11 October. AAISHA DADI PATEL unpacks the significance, if there is any.

Not all Muslim women cover their hair in the first place, and the remaining people invited to take part in the campaign – men and non-Muslim women â€“ wouldnâ€™t be wearing it anyway. Basically this is a campaign asking everyone who wears a headscarf, whatever their personal reasons, not to do so.

It could almost be a joke but it isnâ€™t. And people havenâ€™t taken kindly to it. Some have argued that this is just the latest in a series of moves in which white, Western feminists â€“ a la Femen â€“ try to â€œsaveâ€ Muslim women and liberate them from the oppressionÂ they believeÂ hijabÂ signifies.

#nohijabday is just full of white feminists trying to “encourage us to be free from our hijab” chill fam, its material not chains â€” Â® (@Hotho_Yusuf1) September 29, 2015

Itâ€™s also brought Islamophobes out of the woodwork in droves.

@mxshti @BasimaFaysal And you are very brainwashed and sad! The whole idea of covering up is a man made idea to control women #nohijabday

The hijab (and niqab & burqa) is embodiment of rape-culture and misogyny. Your personal regard for it doesn’t change that fact. #NoHijabDay â€” Atheist ex-Muslim (@ex_muslim) October 9, 2015

Many Muslim women who do observe hijab have taken offense to the campaign and a counter hashtag – #HijabAppreciationDay – to post pictures of themselves in their hijab.

When you look at where the call for the movement originates, a bit more context comes into the picture. The campaign was started by Iranian journalist Masih Alinejad back in 2014. Alinejad started a Facebook pageÂ inviting women in Iran to post pictures of themselves without their headscarves on in defiance of Iranian law, which states that all women must observe hijab.

Alinejad was advocating for Muslim women to have the freedom to choose whether to wear the hijab for themselves.Â Inevitably, white feminists have misappropriated Alinejadâ€™s movement to build on a narrative of Islamophobia and perpetuate moral panic around the practice of hijab. In case they missed it, Muslim women are perfectly capable of pursuing feminist ideals themselves.