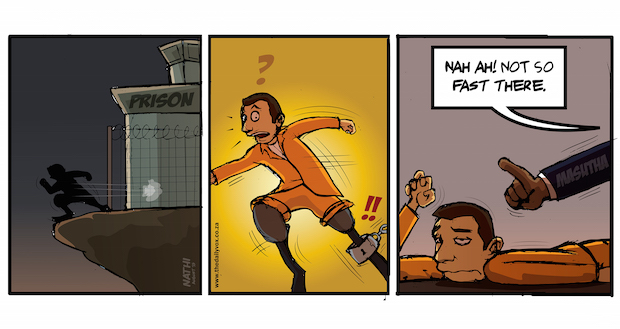 There was a lot of negative sentiment earlier this month following news that Oscar Pistorius, who was convicted of killing his girlfriend Reeva Steenkamp in one of the most highly publicised court cases ever to hit South Africa, would be out on parole after serving just 10 months in jail. What cut even deeper was the fact that he would be releasedÂ in Women’s Month.

(The state argued but never proved that Steenkamp was killed during a domestic dispute but that hasn’t stopped people from viewing her death in this way.)

We had a whole other cartoon about it prepared and everything. (If you want to see it, click here.)

But before the simmering anger turned into outrage, Justice Minister Michael Masutha stepped in to block Oscar’s release, saying the decision had been made prematurely.

This bit is debatable. It appears that as a general rule, South Africans who’ve committed crimes and behaved well in prison are automatically released on parole after serving a sixth of their sentence, with all the discussion and paperwork on the matter having been dealt with earlier.

But Masutha has insisted on following the law to the letter, and the law says that the offender should only be considered for parole after having served a sixth of their sentence. So now that Oscar has served his 10 months, some prison officials will look at his case again, and come to the same decision they came to a couple of months back, and decide to release him in the near future.

Basically, that means Oscar just needs to sit tight for just a little bit longer before he can be released on parole.

Because in yet another case of pink-thinking, it turns out you can treat South African women however you want, as long as you make lots of empty gestures each August.

Justice for Cecil – and Biddy and Lamby and …