Home Muslims Why are we surprised that the #MuslimBan is a thing?
WhatsApp
Facebook
Twitter
Email
Print 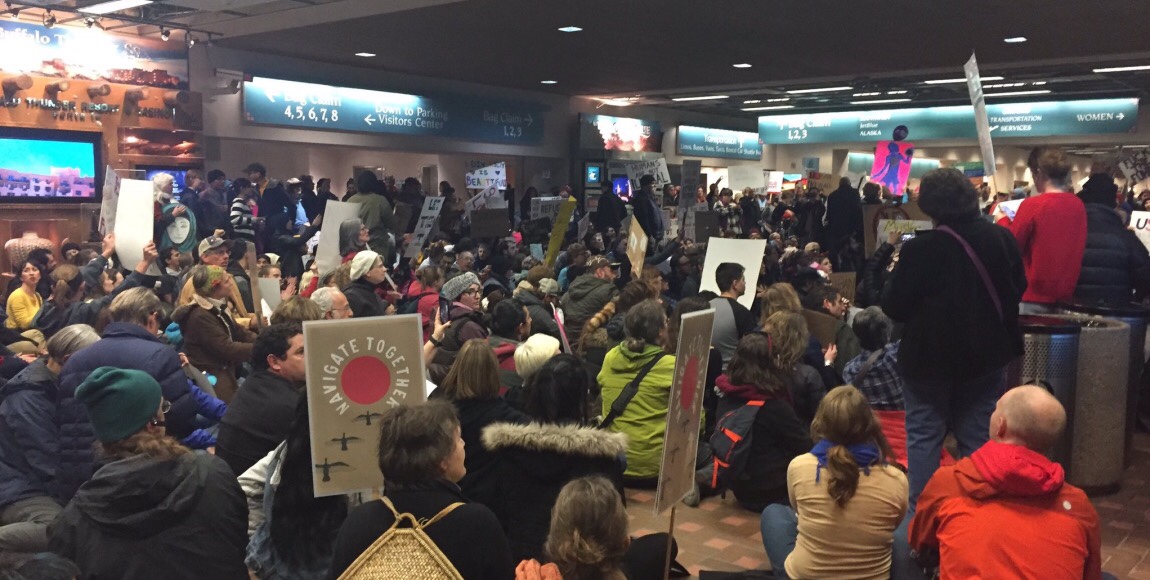 An executive order from US president Donald Trump temporarily banning refugees as well as other travellers to the US, including green card holders, from seven Muslim-majority countries went into effect this weekend – and faced widespread condemnation, as protests grew at airports across the country.

One of the most observant signs at the #laxprotest #lax pic.twitter.com/v6LaN2pwRi

The seven countries, which include two African countries, are banned from entry for 90 days. People travelling from Syria, Iraq, Iran, Sudan, Libya, Somalia, and Yemen were detained at airports across the US, and kept for screening and questioning.

According to the American-Arab Anti-Discrimination Committee (ADC), some of the questions that detainees have to answer include â€œdo you support Sharia law?â€, â€œdo you believe in beheadingsâ€, and â€œwhat is view on homosexuality?â€.

Immigration lawyers were doing work pro-bono across the country, camping out at airports to volunteer their services for those in need of them.

Something important here going unmentioned: these lawyers had to buy tickets to gain access to work here pro bono. These are Chicago heroes. https://t.co/CV0ol98rLJ

Those who they assisted included: people who were kept in detention for more than 30 hours, the children of a Somali refugee who were born in the US and are naturalised citizens, an elderly and disabled Iranian, and a five-year-old Iranian boy, who was born in the USA, and had a birthday that day.

Another release. Somali woman Binto Adan (on I-130 visa) and her two kids (US citizens). Been held from 8 am Sat to 1 am Sun pic.twitter.com/80fWQLYRe3

VIDEO: Mother from Iran, 5-year-old son reunited after he was detained for several hours at Dulles Airport: https://t.co/NwpHxJBG7C pic.twitter.com/LPxGCxNWdr

On Sunday, a federal ruling was made to stay deportations of the people who had arrived in the US on valid visas but were being denied entry.

Rather than being a cause to celebrate however, the temporary ruling comes with its own setbacks. The ruling disallows deportations of the people detained at airports, but their fates will be argued at a hearing on 21 February 2017. People with green cards (permanent residents) who return to the country will have to undergo “additional screening”, according to theÂ Department of Homeland Security. Immigrants who hold non-US dual-citizenship and are nationals of one of the seven countries will also not be allowed in. Meanwhile, all other immigrants from the seven countries are still banned from entry for 90 days. Refugees are banned for 120 days but Trump says Christian refugees will be given priority status.

Those protesting displayed beautiful harmony, as Muslim protesters prayed at airports while others surrounded them.

But despite what many protesters came out to say – calling the ban â€œun-Americanâ€ – some urged us to remain mindful of the fact that this is not something that came out of isolation.

Aside: it's not cool with me to erase other times the US has enacted tragically racist policy out of 'solidarity' against the #MuslimBan.

Slavery, massacres, internment, imprisonment, deportations, etc. – white 'allies,' need you to think about #MuslimBan in a system of racism.

The Council On American Islamic Relations (CAIR) Florida also issued a statement urging Muslims in the USA to not leave the country or face being denied entry back in. â€œBased on conversations with federal officials, advising all non-Citizens, including green card holders, NOT to leave country under any circumstance for they may be denied re-entry.â€