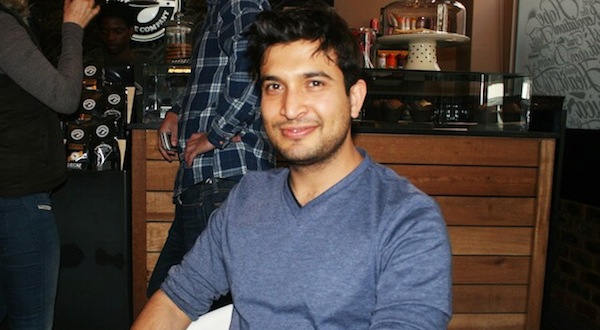 PONTSHO PILANE sat down to talk with Imran Garda about the media, the Rainbow Nation, and his new book.

Imran Garda, wearing a blue sweater and a big smile, looks relaxed as he waits for me at Motherland, a coffee shop in Rosebank frequented by students and freelance writers.

He invites me to sit down and offers to buy me a coffee, but I am too nervous to accept. After all,Â this isÂ a man who has interviewed statesmen, ambassadors and even rebel groups.

Garda, who is currently based in San Francisco, is just shy of 32 and is known to most as a news anchor on Al Jazeera English and presenter of the channelâ€™s show The Stream. Where do I even begin?

As an ice-breaker, and out of general curiosity, I ask him what he thinks of The Daily Vox.

â€œWhen you guys were stillÂ South Africa Votes 2014,Â I was curious about what would happen to you after elections,â€ he says, â€œThere is some bad reporting in South Africa, so it is good to have The Daily Vox.

â€œTo be a good journalist you have to report things exactly as they have been told to you or how you saw them happen, no matter how much it contradicts what you really want to say or what you personally believe in. That is the beauty of journalism, but some publicationsÂ [in South Africa] tend to mix the truth with fiction.â€

Accidental anchor
Garda began his journey in the media as a film and drama student at Wits University. As he tells it, he just happened to find himself at a SuperSport audition one day and at 20 became an anchor at the channel. While at SuperSport, he freelanced as a political journalist – Â something he has always had an interest in.

In 2006, he joinedÂ Al JazeeraÂ as a sports reporter and was spotted by the head of news, who switched him to the role of news anchor at the inception of Al Jazeera English.

I ask him about hisÂ most interesting moments there. â€œThere is a lot of outrageous stuff that happens when we make news, even in studio. Weâ€™ve had a government spokesperson walk off set during a live show because he is upset at my questioning.â€

Garda is in South Africa to promoteÂ his debut novelÂ The Thunder That Roars.

His book is about a South African journalist, Yusuf Carim, who finds himself on a personal journey while looking for his fatherâ€™s friend, Sam.

â€œI always wanted to write fiction. I have written short stories and I used to write really bad poetry for girls. What is interesting is that I get to explore the nuance through fiction; it allows one to question what their position in the world is. Each person can interpret it as they wish and go on a journey, something which is not possible with journalism,â€ he says.

Garda spent eight years away from South Africa, travelling extensively for work. Time and distance gives him a particular perspective on South Africa.

The Rainbow Nation exists
â€œIf you look at parliament andÂ theÂ capital, one would think that there are no opportunities for young people in this country. But if you come to places like here, The Zone and Motherland, and look at the young professionals, particularly the young black middle class that is rising with better opportunities than their parents, one can say that there are definitely opportunities for South African youth. There is light at the end of the tunnel; I hope that the economic inequality gap is bridged faster than it is right now,â€ he says.

I ask him if he thinks the Rainbow Nation truly exists and if young South Africans should believe in it.

â€œThe Rainbow Nation exists,â€ he says. â€œWe are just a messy, adolescent nation where people are either tremendously optimistic or ridiculously pessimistic about everything. I think we lack people who can objectively acknowledge the gains we have made as a nation and still point out the shortcomings.â€

During Nelson Mandelaâ€™s memorial service last year, Garda got a chance to engage with the Economic Freedom Fightersâ€™ Julius Malema and some other members of the political party, and says he believes the EFF appeals to young people who have lost hope in the ANC.

â€œThe difference between a young EFF member and a middle-aged ANC or DA member; the middle-age guy only goes into the townships every five years to campaign, whereas the EFF guy lives in the township. Therein lies the difference,â€Â he says.

He warns that the media should be careful of caricaturing members of the EFF.

â€œWhen we go to their rallies we meet people who work at a bank, who havenâ€™t read Marx and donâ€™t particularly have ideological ties, but they are sick and tired of these other guys,â€Â he says, referring to the ANC and DA.

At this point Garda becomes distracted, and I notice him smiling uncontrollably as he looks towards the entrance of the coffee shop.

I turn to seeÂ thatÂ his wife and childrenÂ have arrived. We quickly wrap up our discussionÂ andÂ he strikes a pose for the camera.