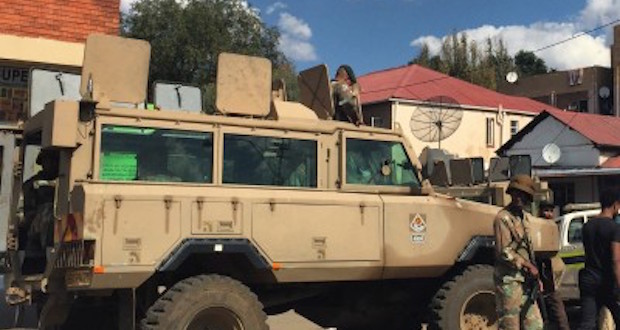 Operation Fiela has been described as â€œlegitimising xenophobiaâ€. While many South Africans have spoken out against the controversial raids, others feel they are justified. However, the operation has had a devastating effect on foreign nationals, who have been detained, deported, and forced to seek refuge in displaced personsâ€™ shelters. KHADIJA PATEL reports.Â

â€œI didnâ€™t run away from Zimbabwe because of all that political and economic things,â€ says Loyce Hove, a Zimbabwean woman who had been living at the Central Methodist church in Johannesburg for five years.

â€œI ran away from my family.â€

Hove told The Daily Vox she was forced to flee from her family, who ostracised her because of a physical disability that causes her to walk with a severe limp.

She was one of the more than 200 immigrants who were detained by the South African Police Services during a raid on buildings in the Johannesburg CBD in early May. In total 3,914 people have been arrested by government across the country.

â€œWe were sleeping. They banged the door and others, where they stay, they lock the door. They broke the doors. And they were holding guns at us. It was confusing,â€ she says.

The Peopleâ€™s Coalition against xenophobia, a grouping of civil-society organisations, has repeatedly slammed Operation Fiela-Reclaim as a â€œshow of institutional xenophobiaâ€.

Stephen Faulkner, a member of the coalition, said police action was only deepening the hysteria.

â€œTo equate crime with undocumented people in our society is not tackling xenophobia, it is legitimising xenophobia,â€ he said.

But the condemnation hasnâ€™t come only from activists and civil society. Ordinary South Africans have been appalled by the vicious early morning raids. For instance, Azra Fredericks, a 23-year-old student in Johannesburg, said the raids simply reminded her of what she has been told about a time long past.

â€œThere really isnâ€™t a difference between what the apartheid government did to non-whites then and what this government is doing to non-South Africans,â€ Fredericks says.

Government denials
The government, however, has dismissed these criticisms, arguing that it is restoring the rule of law after a recent spike of xenophobic violence in Johannesburg and Durban.

In a statement, the interministerial committee on migration said that Operation Fiela was not targeting law-abiding citizens or law-abiding foreign nationals. â€œWe categorically and publicly denounce that Operation Fiela is targeting foreign nationals. Government will never authorise actions that are contrary to our constitution and the laws of the country,â€ the statement reads.

And indeed, while criticism against the government campaign has been vocal, there are many South Africans who have welcomed the move to deport illegal immigrants.

Jabulani Dlamini, a 43-year-old taxi driver in the Johannesburg CBD told The Daily Vox that he â€œsupported the raids because there are just too many foreigners here in South Africaâ€.

Dlamini is particularly resentful of the attitudes of foreigners towards South Africans.

â€œThey even think that they own this place,â€ he says. â€œI understand that we must live with the spirit of Ubuntu but they are too comfortable and very arrogant.â€

Similarly, refugees living in Mayfair welcomed the systematic approach to checking the documentation of immigrants under Operation Fiela.

â€œIn Mayfair, before, the police in uniforms used to come and they used to take money from people and they robbed many people,â€ he says.

â€œBut now we see when the police come with the army, you show them your documents, you answer their questions and people who have their documents are comfortable with this, â€œ he says.

But for immigrants like Hove, for whom South Africa has been a refuge from a very personal turmoil, her failure to secure documentation that permits her to live in South Africa as a Zimbabwean, renders her an â€œillegal immigrantâ€.

According to South African immigration law, for a foreign national to legally reside in South Africa that person must have a valid passport from his or her country or a certificate applied for and issued by the department of home affairs. Such a person must also have some kind of visa or permit to enter South Africa.

In the case of asylum seekers and refugees, the Refugees Act of 1998 states that on arrival in the country, any person can go to a home affairs office and apply for asylum.

By law, that person must then be given an interview with a refugee-status determination officer. As there can be a lengthy wait for this, all asylum seekers are legitimate until their application is rejected.

While South Africaâ€™s approach to migrants is lauded by some people as progressive, others, like Rhodes University Professor Michael Neocosmos, feel the thrust of immigration legislation since 1994 has been â€œdeeply problematicâ€.

â€œMangosotho Buthelezi, who was the first minister of home affairs, has got a lot to answer for,â€ Neocosmos says. â€œThe explanation has always been, even during apartheid (but every target is different) to say we have to exclude some for the good fortune of South Africans and South Africa, which has to be competitive.â€

Neocosmos says that the thinking that informed the original legislation persists and, it tends to be inclusionary rather than exclusionary.

Raids on illegal immigrants are certainly not a new phenomenon.

Similar raids have been taking place since the â€™90s. A 2009 study titled, â€œOne Burden Too Many? A Cost-Benefit Analysis of Immigration Policing in Gautengâ€ found that the South African Police Service spent a quarter of itsÂ annual budget, or R350-million in Gauteng alone, on immigration policing.

According to Neocosmos this approach contributes to the criminalisation of migration.

In the past, he says, â€œThe police would go around and say we found so many guns, so many weapons, so many rounds of ammunition and so many illegal immigrants.

â€œSo an atmosphere was gradually created whereby immigration, or migration to this country â€“ whether it be from abroad or in fact from the rural areas in South Africa itself â€“ is criminalised.â€

Minutes after speaking to Hove at the Gift of the Givers camp in Mayfair, officials representing the Zimbabwean Consulate General arrive to document Zimbabweans who wish to be repatriated. Less than 10 people joined the queue in front of the officials. Others, stared ahead, stubborn in their resolve to remain in South Africa.

But even as the impasse continues, some South Africans insist that illegal immigrants cannot remain here.

Dlamini, the taxi driver from the Johannesburg CBD insists, that theÂ deportation of foreigners is the only solution.

– With additional reporting by Pontsho Pilane and transcribing by Fatima Moosa; featured image by Khadija Patel.