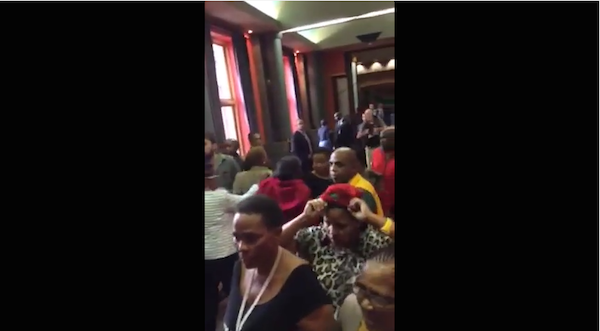 Parliament descended into chaos again on Thursday. The National Assembly was supposed to hear a debate on the Nkandla report prepared by an ad-hoc committee of Parliament but, according to ENCA reporter Paula Chowles, Speaker for the House Baleka Mbete changed the order of events so that it would occur later on – or not at all.

Opposition MPs from the EFF and DA then began filing a series of “motions without notice” in order the bring the issue of Nkandla back onto the agenda.

A clear strategy by the Opposition to use ‘motions without notice’ to try and embarrass the ANC before the #NkandlaReport. @eNCAnews

Before long there was mayhem in the house with MPs talking over each other, ignoring the Speaker, and shouting.

EFF member Godrich Gardee and Minister of Small Business Lindiwe Zulu ended up having a shouting match and left the house to continue the fight.

Chowles shot this video of the altercation.

Details surrounding the incident remain sketchy but you can rest assured, this won’t be the last you hear of it.