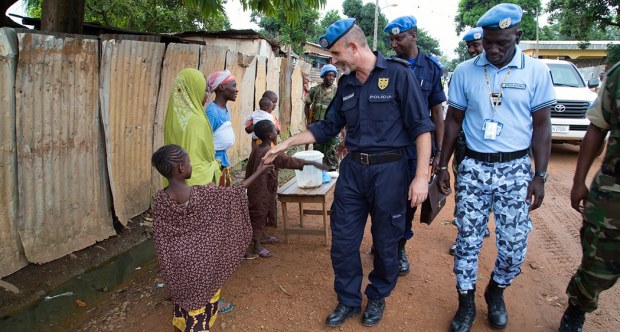 UN peacekeepers are notorious for sexually assaulting the vulnerable people they are meant to protect. But why isnâ€™t the world raising a bigger stink about it, asks executive editor Azad Essa.

In a flash, innocence is lost, dignity stolen and a spirit beaten. It is a power so encompassing that it holds no space for compassion for the disenfranchised.

It is a familiar tale.

Stopped at a routine checkpoint by armed officers, a little girl is raped. At a food distribution point, two teenage boys are sodomised for daring to ask for more. Somewhere else, a widow enquires about the fate of her girls in a refugee camp across the border and she must undress as a courtesy to the men in uniform.

These are the kind of crimes youâ€™d associate with Congolese soldiers in rebel-held jungles of the North Kivu province, or the Indian army in Kashmir or Manipur, or the American-backed militia in Afghanistan. But these are crimes committed by men in blue hats.

These are United Nations peacekeepers. They are deployed to protect and stabilise zones of severe conflict. They are embraced as redeemers, but the litany of abuse perpetrated by UN personnel is bewildering. UN Secretary-General Ban Ki Moon was himself forced to describe the scourge by peackeepers as a cancer in the organisation.

In December, it emerged that at least four underage girls had been sexually abused by UN troops in the Central African Republic. The 13-year-olds were paid 50 cents for sex.

Because of the sensitivities associated with the sexual abuse of minors in conflict, the details of the rapes are not known. We donâ€™t know exactly how many peacekeepers there were, or what rank they held. We donâ€™t know how often the abuse took place, and what happened to the alleged perpetrators. All we know is that the troops were from Gabon, Egypt and Morocco.

These allegations hardly titillated the insatiable global news media machine. There was a small rumbling of awareness that something terrible had been revealed, but it was as if we did not know what to do with the story.

And itâ€™s not like these latest incidents were unprecedented. In the 1990s, similar reports of abuse were leveled against the United Nations in the Balkans and Cambodia. So too in West Africa in 2002. Of the 480 allegations of sexual abuse leveled against the UN between 2008 and 2013, at least 30% involved minors.

Peacekeepers continue to make the news for all the wrong reasons. And still, any announcement of a UN peacekeeping force, or a stabilising mission in lands deemed godforsaken, is hailed. Perhaps it continues because peacekeepers are in many ways the very embodiment of the UN: our best hope amidst despair.

But the United Nations cannot continue business as usual. In June 2015, 10 years after the Zeid Report, which outlined procedures to tackle sexual abuse within the UN, the Associated Press said that UN investigators had spoken to 231 girls in Haiti who claimed they had been forced to perform sexual acts with peacekeepers in exchange for basic necessities. Again, at least a third were below 18 years of age.

The revelations in June came two months after a whistleblower leaked a report that implicated soldiers from France, Chad and Equatorial Guinea for allegedly sodomising six boys between the ages of 9 and 15 in 2013 and 2014 in the CAR.

At the time, the French authorities together with the UN tried to squash the report. The only reason the world became aware of the crimes in CAR was that a man named Andries Kompass leaked a secret document detailing the sex crimes to the French government. The report, titled â€œSexual Abuse of Children by International Armed Forcesâ€, detailed the rape and sodomy of starving and homeless young boys by French peacekeepers. Although members of the UN, including UNICEF, had conducted the interviews, no action had been taken, neither were the French informed about the report. Until Kompass decided to act unilaterally.

Of course, no good deed ever goes unpunished. Following the leak, Kompass was condemned by the UN for passing on a confidential report. For nine months he was placed under internal investigation. On 19 January, the UN finally exonerated him of any wrongdoing. On being cleared of all charges, Kompass, a servant of the UN for 17 years, said he was relieved but sad. â€œIt is still a mystery why most of the UN leadership decided to do this to me when they knew very well how badly the UN was handling these types of cases and they knew there was a big gap in terms of under-reporting of these kinds of cases.â€

But has anything changed?

“Speak to the UNICEF, and they ‘want to protect the children’ from the trauma of retelling their story. Enquire with the UN Mission in the CAR about their commitment to end the scourge, and they spout rhetoric that would make Orwell proud. Enquire with the South African government, who had soldiers recalled for allegations of abuse in the DR Congo, and they say theyâ€™re ‘uncomfortable talking about issues relating to the UN.'”

If Kompass thought his action would afflict a power of persuasion, alas, the paycheck won.

It is the worldâ€™s worst kept secret.

UN staff, peacekeepers are impetuously frisky on assignment. Directing refugee protection by day, fornicating with local helpers by night. Oblivious to the power of their foreign currency and its obvious abuses. It is a culture of obscenity in a place of little law, little order.

That these blue hats are in reality no better than rebel and militia groups or underpaid and brutal national armies complicates our capacity to offer safety and protection to the worldâ€™s most vulnerable.

The perpetrators are from France, masters at imperial conquest. They are South African, home of massive levels of rape. They are Indian, whose capital Delhi is no place for a woman at night. They are Pakistani, where a girl shot in the face for audaciously asking for an education is now their biggest export. They are from Egypt, run by a military that espouses no respect for its people, men or women.

But when they wear the blue hats they are meant to transcend the ugliness of who we are as humanity. Deployed to restore some semblance of civility, it is as if the anarchy is too seductive to resist. The darkness compels: the debauchery, it goes on.