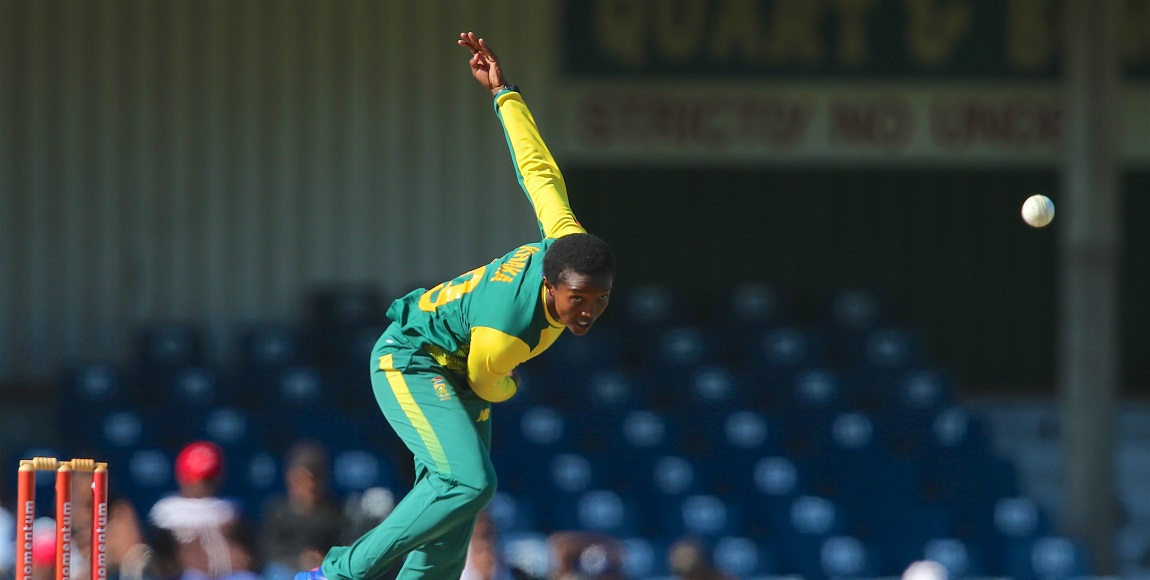 In the final installment of our “Get To Know the Proteas” series, The Daily Vox team spoke to right-arm medium speed bowler, Ayabonga Khaka. She was one of 18 players awarded national contracts by Cricket South Africa in March 2018. Khaka also shares a birthday with South Africa’s first democratic president, Nelson Mandela (which is pretty cool).

Speaking about how she got into cricket, Khaka said she played since she was very young.

“I started playing cricket when I was seven years and was in Grade 1 and I joined the mini boys cricket [team]. I played mini cricket until I was 14 because there wasn’t anywhere else to go and I didn’t know about women’s cricket at that point. Then I quit cricket and played soccer but then, when I was in Grade 9, I joined the ladies team. I played cricket. I played for Border Provincial Under 19 and also the Senior Team, and that’s how I saw there’s SA girls and my interest started and I chose to play this.”

Her favourite thing about cricket has to be the environment: “It was different. It’s a sport where there is a lot of discipline. I just enjoyed it. Then I had to choose between soccer and cricket, and I chose cricket because I enjoyed it more than soccer.”

Khaka is one of the best right-arm bowlers to be playing for South Africa, and she said she enjoys bowling more than anything.

“It’s easy to just take a ball and bowl because batting sometimes the ball hits you and then I’m like no I like to be a bowler. It’s nice and challenging, especially that time I was bowling against boys. I was always happy because when you get one out, everyone will be on their case. It was nice like that.”

The Proteas reached the semi-finals of the 2017 World Cup and it was during that tournament that Khaka took her favourite wicket. “The wicket of Raut. It is my favourite so far. She hit me for six and then I came back and took the wicket.”

When asked about the ever present gender pay gap in sport, Khaka said she doesn’t think it will disappear overnight but that is a process. “I think to be honest it’s going in a right direction. It’s not something that is going to grow within one year. It’s growing every year. But I see from my side that it’s growing each and every year. No one will expect it to happen over night.”

Being a women in sport can be tough but Khaka said she has never had a bad experience. However, the recognition the Proteas are getting has changed her experience.

“Everyone knows about us because we’re playing on TV and everyone recognises [us]. They never knew about us. They give us all the respect. It’s nice but you have to be responsible with everything outside of the field and know how to carry yourself outside.”

As for her favourite player…

“To be honest, I like Makhaya (Ntini). Coming from the same province, he showed the world it doesn’t matter where you came from if you have the skill, you can be the best.”

Khaka says even though she has played at several stadiums, her favourite place to play is at home.

As for her advice for youngsters: “I think if you want something, you need to work hard and sacrifice your time for it. Also you don’t [just] focus on sports. You have to study because sport is a short career. It might be long or short and you need to study no matter what. And always work hard. You must work harder and harder and fight.”

Find out other interviews with the Proteas here:
Shabnim Ismail Is Aiming For The Top
Proteas Captain Dane Van Niekerk: No Gender Equality In Pay Anytime Soon