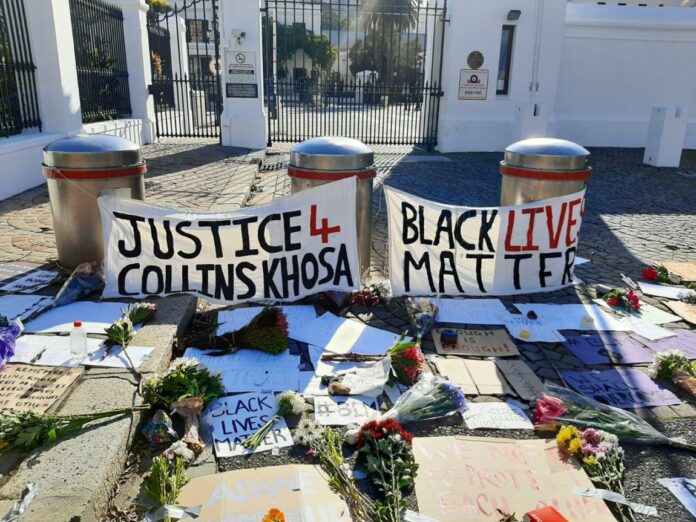 Since Youth Month is upon us, it is the time of year to commemorate young people’s activism in South Africa. It is fitting to check in with the youth who are at the forefront of leading social change. One of these young people is Hannah Mutanda who runs the Instagram page Protest as Praxis. This is a popular page dedicated to supporting grassroots movements in South Africa.

Mutanda began the page in June 2020, as the pandemic heightened. Since then, she has gained more than 5000 followers who are drawn to the broad range of issues she posts about. From climate change activism to service protests, Mutanda is committed to a political engagement with an African lens. With the arrival of COVID, she saw the need to embed a sense of social responsibility among South Africans. Often, the pandemic was seen as something to be managed on an individual level.

Mutanda recognised that instead, we need to be challenging structures and institutions for their management of COVID-19. Seeing how refugees were being denied aid in South Africa only amplified Mutanda’s need to assert collective responsibility. This was her way of protecting those who were the most vulnerable in the pandemic.

“I was hoping we could remove ourselves from this nature of blaming people but rather rely on something that has to do with community and collective more, seeing as social structures weren’t provided for people,” said Mutanda.

One of the first things Mutanda organized under her page was a vigil for Collins Khosa, a man who was brutally assaulted and murdered by the South African National Defence Force. At the time that Protest as Praxis was started saw the reigniting of the #BlackLivesMatter movement in the US after George Floyd’s murder. The case of Khosa localised the discourse surrounding police brutality against black bodies, something that Mutanda had foreseen when she made the page.

“I also anticipated, purely because of the treatment of refugees, that the Global South would be having its moment of revolutionary actualisation,” stated Mutanda.

The page is intended to be a safe place for people to practise and nurture their political embodiment. Mutanda’s page intended to assist in safeguarding those being let down during the pandemic. This was especially in 2020, where the need for social justice was amplified by things like vaccine inequality. The issues of the marginalised were particularly personal to Mutanda due to her own status as a refugee in this country.

“I was born in South Africa but am still not recognised as a South African in documentation. So I still face unemployment and a lack of coverage from these medical issues or aid specifically. If it wasn’t for the particular privileges and friends that I have, then I would be completely destitute,” Mutanda shared.

These experiences played a part in motivating her drive to create a sense of solidarity with marginalised communities during the pandemic. Mutanda recognizes how Instagram is important to activism since it is often the easiest way for young people to reach out and use their voice. However, for her, it is important that activism is not restricted to social media and is actually practised and embodied in people’s daily lives. This is a key pillar of what her page stands for, as the word ‘praxis’ encompasses a sense of action that takes theory into real life.

“In terms of protest being a praxis, I was very curious about… organising ourselves in a way where we can say no or try to dismantle or disrupt particular structures and what that would look like. And also how that can be a form of nurturing and a form of care.”

Caring and nurturing activism is another important tenant of what Mutanda is trying to do with her page. She has helped organise protests for many causes such as #BlackLivesMatter, Palestinian solidarity and anti-GBV campaigns. If she is not organising protests herself, she uses her page to support other grassroots movements and gives advice to those who are looking to start their own movements.

“I’m very curious about how care can be embodied in ruthlessness,” said Mutanda. ”That is why Protest As Praxis is about being ruthlessly attentive and ruthlessly disrupting any structure that takes away from our political revolutionary actualisation.”

As a young person, Mutanda believes that it is important for the youth to be involved in activism because of their responsibility to the future.

“We try the most that we can to get the space to help us and get the tools that we need to nurture our future,” Mutanda shared.

In terms of her hopes for the youth, she hopes for a radical autonomy that will entrust people with a society that is sustainable and inclusive. Seeing as her page has helped facilitate many protests, donation drives, collectives and raised over R220 000 – it is clear that Mutanda is playing her part in creating this future.

You can support Protest as Praxis by following the Instagram page here or following the  associated page Artists 4 Equity where funds raised through auctioning arts are used to support grassroot-centred projects. If you are a budding activist needing advice or looking to support a certain cause, Mutanda’s page is also acting as a bridge to provide these resources and sharing news with people.