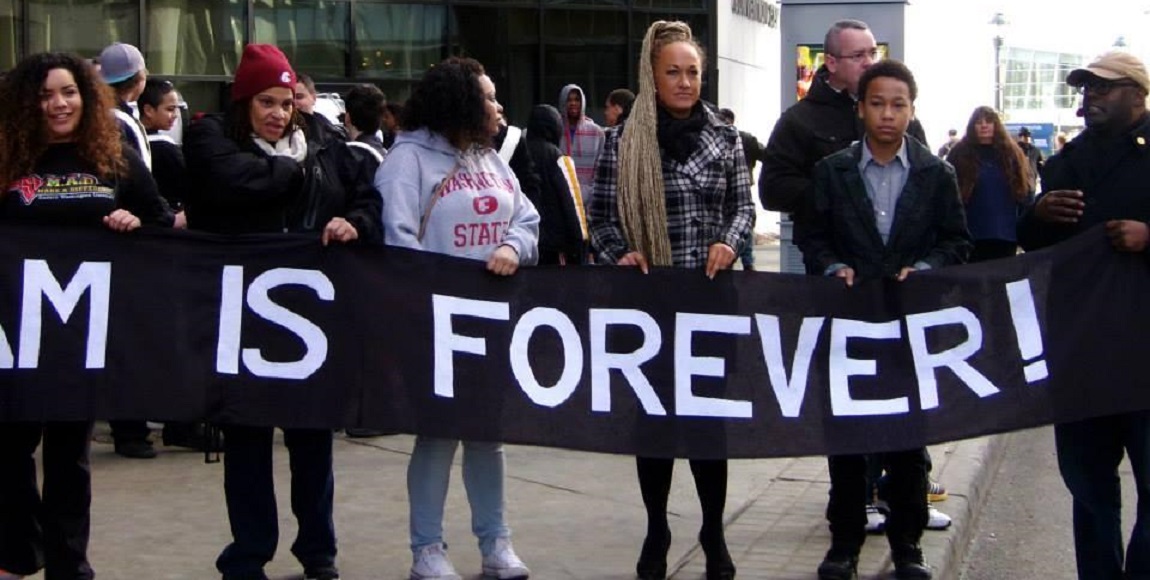 When the Quest for a Non Racial South African Society Dialogue (QfNRSASD) poster was widely shared at the beginning of April, it wasn’t because of an interesting panel or discussion being held. It was because most South Africans thought that the organiser’s selection of the former NAACP leader and “trans-black” Rachel Dolezal as a guest speaker at a dialogue about race and identity politics was a joke.

Yanisha Teelock, founder of the civil society group Understanding and Decolonising Cultural Appropriation, which created an online petition to stop Dolezal from speaking in the country, didn’t take the announcement seriously. “A friend just informed me that there was a bit of a churchy couple that invited her to talk at the Joburg Theatre and we all thought it was a joke,” she said.

By the time they decided to take on the prospect of Dolezal speaking in South Africa, they’d run out of time to do anything effective about her presence. The group has put out a call on Facebook asking people to challenge and disrupt her talks.

Having Dolezal speak about race identity and representation is regressive and misses the point of representation, she said. “We can’t just put white women and white men at the front and talk about [race] and talk for us or defend it – I think it’s part of that colour blindness rainbow bullshit.”

Clyde Ramalaine, the managing director of Tsiloab Hoaldings, the communications company that is organising the dialogue, told The Daily Vox they organised the event because they want South Africans to have a discussion about race identity on their own terms. “[O]ur dialogue is aimed at getting South Africans to speak [about race], and not for the state to define and determine our identity,” he said.

They selected Dolezal as the guest speaker because she has become the face of “race transition”, Ramalaine said. “She becomes the example of race being an extremely soluble and toxic definition of identity, because in my personal view she has successfully transitioned race.”

Dolezal’s case has been labelled an example of “transracialism” and racial fluidity. But this use of the term “transracial” has been rejected by people who claim the term on different grounds.

A group of adoptees in the US wrote an open letter on why Dolezal’s co-opting of the term “transracial” is problematic. “Transracial is a term that has long since been defined as the adoption of a child that is of a different race than the adoptive parents,” they wrote.

Dolezal and others, they said, have perpetuated the false notion that a person can simply choose to identify as a different race or ethnicity, but that’s not what transracialism is.

Dolezal is white and was raised in a white family.

“I was raised by white parents. White felt foreign to me. It was the house I grew up in, but I never felt at home” #racheldolezal

The authors write that: “Damaging forces like racism make it virtually impossible for those with black or brown bodies to simply “put on” or “take off” race in the same or similar manner that Dolezal has employed.” Dolezal, you could argue, is simply exercising her privilege to put on or take off race whenever she feels like it. By using the term transracial, she is misappropriating the lived experience of interracial adoptees who experience different racial dynamics in their lives.

But Dolezal is a controversial figure even outside of her claims to have transitioned from one race to another.

After she was outed as a white person masquerading as a black activist in June 2015, Dolezal penned a memoir, In Full Colour, which tells of her life as a person finding her place in a black and white world. These will be the basis of her talks in the country.

But many of the claims Dolezal made in the book about being targeted because of her race have been disputed. She claimed that her adopted black brother was her son and that her parents punished her with a whip based on their complexion. Her parents and her brother have denied this.

He said Dolezal’s is an interesting case and that her unique experience is exactly why she’s here.

What Ramalaine wants to explore through these talks on racial identity is our “inalienable right” to self-identify as a specific race. “South Africans can have a decent dialogue in which we may arrive at a place where [we] can describe our past, our present, and our future free from race,” he said. But given his dream of a world free from race, shouldn’t he be hosting a discussion on being “raceless”, and inviting a speaker that has not appropriated another specific race?

At the first round of the QfNRSASD dialogue held at the University of Johannesburg (UJ), Dolezal was relentlessly heckled by the audience. She maintained that race itself is a lie and that “we are one human race”. Ramalaine backed her up by saying “I consider it Rachel’s right to consider herself black.” The second round of talks will be held Wednesday night at the Joburg Theatre.