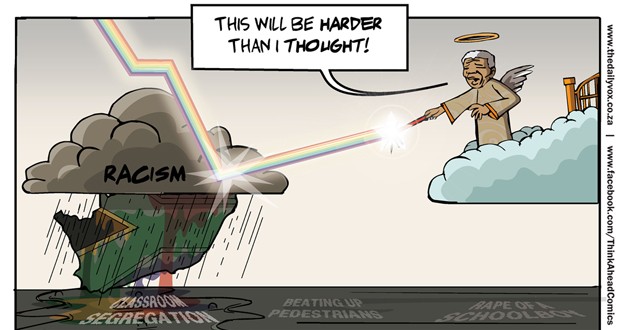 On Tuesday, The Times published a cartoon by Jonathan Shapiro, better known as Zapiro, which depicted the NPA’s Shaun Abrahams as a monkey doing the bidding of Jacob Zuma, who controls him with a music box labelled “NPA”. Now, while Zapiro is known for courting controversy, this cartoon was a step too far. THE DAILY VOX TEAM explains why. The Conversation offers a deep dive into the problematic history of comparing black people to monkeys. But here it is summarised: the association of black people with monkeys is traced to the start of the Europeans’ reign of plunder and terror in these parts. And it has consistently been used to denigrate black people as being less worthy of dignity than their white counterparts.

False to equate. If you accept it’s wrong to call a black person k****r then you can accept simianising them’s wrong https://t.co/hu0gXkNyZ7

And it’s not funny. The point of depicting black people as monkeys relies on the idea of black people being inherently inferior to white people. And there’s nothing funny about that. Especially in a country where until 20-odd years ago, everyone with a skin tone darker than white, was systematically oppressed, and now continues to suffer through the legacies of that system. Depicting a black person as a monkey, and then expecting people to accept it as political commentary is some higher grade Penny Sparrowism.

And let’s not forget the reference to black people as monkeys in this manner does not happen in a vacuum. Just a few days ago, in the US, a professional basketball player described his opponents as “quick little monkeys”. He apologised, but there have also been spirited defences written on his behalf anyway.

Doubt Adams meant remarks in racist way, but “don’t call black people monkeys for any reason” is a fair ground rule for everyone, methinks

Just in case anyone believes the depiction of black people as monkeys is benign, research has shown that it affects the behaviour of white people towards black people. “The association between ‘black’ and ape left our white respondents more open to the possibility that police violence might, in fact, be justified,”Phillip Atiba GoffÂ says of the findings of his research.

Whilst Zapiro did try to defend himself by tweeting a link to this image when asked whether he has drawn white people as monkeys previously, it doesn’t suddenly make everything okay. The ugly, racist history behind the usage of the term means that it’s totally off limits for him. Simple as that. And if you are unable to describe public figures without resorting to racist caricatures, then,Â in the words of the Honourable Ndlozi, “Your politics is bankrupt.”

You really can confront Zuma’s shenanigans without attacking blackness. It’s not his blackness that makes him a problem