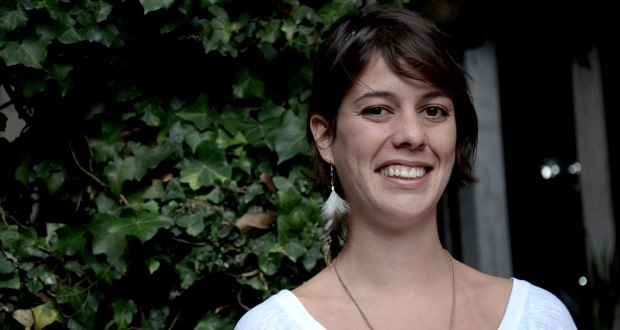 Fam, climate change is real. And if we aren’t going to speak up, someone else has to. This is the message from young climate change activists and thinkers at this year’s International Civil Society Week in Bogota, Colombia. RAQUEL ROSENBERG, co-founder of Engajamundo, a youth-led advocacy group on climate change based in Brazil, says young people have more power than they imagine. And that caring about the climate is our responsibility. The Daily Vox chased the 26-year-old down in Bogota. And caught the feels.

What is Engajamundo?
I’m a youth activist and social entrepreneur and one of the co-founders of Engajamundo which means “engage world” in English. We work with mobilisation, advocacy and capacity building with young people among global issues like climate change, gender equality, sustainable development. The idea is to capacitate young people and to show them that they are a part of the solution of these global issues, and also to build strong positions and take to the UN conferences to make sure our voices are heard there.

On making sure women are represented
We are a “girl power” organisation, so we have five full-time dedicated people and we are all girls. The five of us dedicate full time, my administration team. We also work on the Commission on Status of Women (CSW). This year for example we took a delegation of seven young Brazilians to the conference and in one of the official events, one of our delegates, a black girl from northern Brazil, talked about all the non-privilege she has or doesn’t have, and how she is challenged by the local community she lives in, and how getting into university at all was a huge challenge for her. Now being there in the UN, she said, was the first time she heard her voice being listened to by other people. Creating this space to take young black women from local communities is really inspiring and it is the best way to make sure that our work is being done because we can see that we are taking minorities to be part of decisions they wouldn’t ordinarily be part of.

On the differences in challenges faced by young people
Activism and civil society are still dominated by young people from developed countries. So mainly, the things that they say or do on behalf of the youth are not the things that we would say in the south of the world. This is the first sphere that we need to influence – the positions that young people have in developed countries are not the ones that we have, because the challenges that we face are totally different. And what people see in urban areas are often different to what people see in rural areas.

On why she became involved (and stayed)
Our parents were fighting for democracy against the dictatorship in Brazil. For our generation, the challenges are so big that we really need to be united in bigger issues so that we can solve the problem together. There is also the frustration – I found discussions at the UN to be very bureaucratic. Once I saw that they were discussing small points and procedure, I said let’s do something ourselves. We started to organise debates and workshops on the things that were going to be discussed at Rio +20, and I saw ourselves as young people advancing much more than the other civil society group we were having meetings with before. As young people, we want to make action. We don’t want to be discussing. We want to go to the streets, we want to make our voices heard in whatever way – art, graffiti, flash mobs – that is the kind of thing that we like to do, and that we see as powerful enough to show our messages.

On doing the small things
So we started with these small things. I think it’s a process of seeing your own responsibility in these kinds of issues. Asking, “what can I do as a young person to change my behaviour, to be part of the solution?” So if we’re talking about climate change – it’s becoming vegetarian for example, it’s using my bike, using rainwater at home – the small things that we can start to do. And then engage our communities – your school or university, how can you change what’s around you? How can you recycle or change things around you that can affect people, even if it just around you? And then you can think about ideal politics stuff and fight for them as well. From what I see is that if we see what everyone is doing all over the world – young people, civil society, NGOs, whatever – we can exchange this kind of knowledge and I really think that if everyone in the world does something for climate change we don’t even need the governments to do something. I believe in this power, and I believe in this unity of civil society to make sure that we are doing what we need to do as well and not only pressuring governments and companies.

On success, growth and perspective
So now we have more than 700 members all over Brazil, and more than 100 active volunteers doing these workshops and also local activism. What we have learnt from advocacy and activism on an international level is that we can now take it to a local level. We now have 16 local hubs in 16 different states, from the Amazon to the south.

On keeping Engajamundo fresh and youthful
We only accept people aged 15-29 which is the definition of youth in the UN and the Brazilian government. My idea, since I created it, was to let it go and always make sure it is refreshed by new young people so that the organisation can be young forever. And that is the main point for us; that is why we restrict it to 15-29. The day I turn 30 or 31, I will have a different perspective. If we are still want to represent young people, we need to make sure young people are making the decisions. I do believe that people must represent themselves. No one should speak on another person’s behalf.