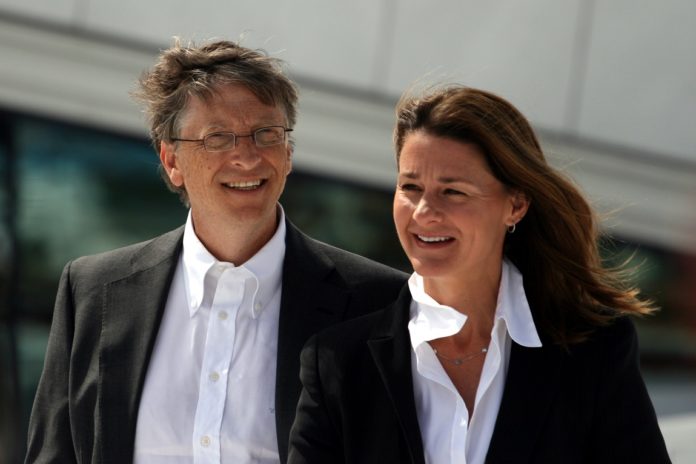 Bill Gates briefly became the world’s richest person again according to Bloomberg’s Billionaires Index. Amazon CEO Jeff Bezos reclaimed the spot soon after the announcement was made. However, as these announcements were happening Gates and his wife, Melissa Gates were on a visiting tour of South Africa. They visited a few townships reportedly for philanthropic work.

Melissa Gates was also in the country to promote her book The Moment of Lift. She wrote the book to share the lessons she learnt from the “many inspiring people she’s met during her work and travels around the world.” The biggest lesson Gates seems to have found is that “if you want to lift society up, you need to stop keeping women down.”

On October 29, The Nelson Mandela Foundation along with Pan Macmillan South Africa hosted Gates for a question-and-answer event. Gates was in conversation with renowned media personality Redi Tlhabi. To a packed audience, Gates explained her reasons for writing the book and where she got her inspiration for the book.

Gates held the audience throughout the conversation as she went through the journey. She detailed how she met many inspiring women who fought against their circumstances in villages around the continent. It was those women who made her realise that she needed to help them with the power she had.

As part of her final advice, Gates said people should find what they are passionate about and how they can use their power to help others. “I do think everybody in this room [needs to] think about your own power and influence and how you want to create change in society and around the issue that you’re most passionate about,” she said.

The mood in the room after the talk was definite one of optimism, especially those that were inspired by Gates’ words. After all Gates seemed to say throughout her speech that what she found throughout her travels is that people all wanted the same thing. She even acknowledged her privilege (without using the term) which meant she is where she is and the woman in the village is there.

The entire event was an interesting one, especially with the manner in which everyone interacted with the idea of Gates. She is an inspirational woman who has done a lot of work to as she says “empower” people. However, it is difficult to accept this knowing that the very system which Gates is a part of is responsible for the situation the women she “empowers” are part of.

Billionaires should not be a part of the economy. The capitalist system is not going anywhere but even with the system, billionaires are not a good idea. In a 2016 report released by Oxfam titled “An Economy for the 1%”, the organisation used data from governments and the market to state that the gap between rich and poor “is reaching new extremes.”

“We live in a world with levels of inequality we may not have seen for over a century,” Oxfam stated.

So even if some of the money Gates and her husband owns is being used for philanthropic work to empower people, no one person should own so much of money. Through their foundation, the Bill and Melinda Gates Foundation, the pair do a lot of their work. The foundation is reportedly worth 50,7 billion American dollars. That is a lot of money.

During their visit, the foundation committed to spending a part of their $1 billion dollars for women empowerment in Africa. Gates said during the book discussion that she was very passionate about the idea of women empowerment especially on issues like female-genital cutting and girl education.

Gates says she wants to give up the power she has to empower other women. During the event, she mentioned that at this year’s Gates Foundations’ Global Goals awards ceremony she gave up part of her speaking time to a black woman activist. These awards in their fourth year take place on the sidelines of the United Nations General Assembly. The awards are meant to recognize individuals for their contribution to the advancement of development goals. It’s very commendable that Gates used her space in that.

However, these were the same awards during which the Indian prime minister Narendra Modi was awarded. Modi was awarded for a project in India to promote cleanliness. This project was reportedly completed by bringing millions of toilets to communities all over the country. These awards took place in September and just a month before that Modi rescinded the special status of Kashmir, effectively further militarising one of the most policised places in the world.

Ever since becoming prime minister of India, Modi has brought a very strong-armed approach to dealing with minorities in India. With the announcement that the foundation would be giving him the award, many people in the international community called for the award to be rescinded. A staff member at the foundation even resigned over the decision.

Yet, Modi was given the award and a platform to speak. All the while the basic human rights were being stripped from Kashmiri people and others within the borders of India. So despite the evidence and the calls for the award to be rescinded, the foundation didn’t listen.

Billionaires likes the Gates and others like them have immense power that comes with owning money. They are able to use this money for good or bad. While most billionaires do not use their resources for good, the Gates do use it. They contribute to projects aimed at reportedly improving people’s lives. The issue remains that no person should have access to that amount of money regardless of whether they earned it or not.

Melinda Gates spoke about empowering women with all the resources and privilege she had available to her. However, through the action of honouring Modi, it raises questions about how she views the women and girls being oppressed by Modi. Having all of the wealth does not mean that billionaires should be allowed to decide who is worthy of being “saved” and rewarded.

It would be impossible to stop all billionaires but at the very least they shouldn’t be given platforms to be voices of morality. And if they truly want to help people in the world, just redistribute the wealth without any conditions.