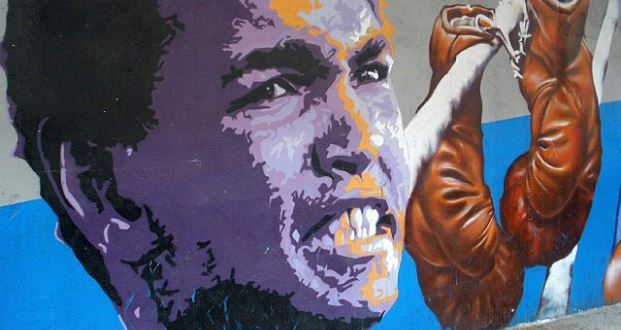 KHADIJA PATEL reflects on that time she looked out of the windows of her motherâ€™s car, searching for Muhammad Ali.

My mother believes that much of what I relate from the diffuse images of sight and sound imprinted on my being are stompies of the whole other world I have living in my head. Some of my childhood memories, she says, are mine alone, disavowing any prior knowledge, or association to the more colourful recollections of my childhood.

I remember absorbing the world that poured out around my feet. I could not know it then but mine was a world teetering on the precipice of great change. It was not just my own world pouring out around my feet. But for the grown-ups filling the streets of my childhood, the world was pouring out at their feet too. A severely constricted world was opening, bringing with it opportunity, hope, apprehension and new political orders to navigate. It also brought nearer the pinnacle of human endeavour, as seen on TV.

I remember being a little girl sitting inside my motherâ€™s Toyota, outside my school long after the school bell had rung one afternoon. I remember staring out the windows at the throngs of people who had gathered there. I remember the men smoking, chatting among themselves and laughing. I remember one group of people standing in the corridor of the entrance of the school, as though they were standing guard. I donâ€™t remember their faces. I donâ€™t know who they were. But I remember people congregating at my school as if it too, for a time, was important to them.

I remember another group of people standing on the corner, across the road from us. And I remember us still sitting in the car. I remember looking out of the car and watching. And waiting. I remember moments stacking together slowly like brightly coloured rings of plastic falling around a stark, white post. But I donâ€™t remember being impatient. I don’t remember wanting to be anywhere else.

I remember watching the people gathered outside with rapt interest. There seemed to be hundreds of people outside the school. And there was a sense of expectation. And excitement. I donâ€™t remember my mother saying anything. But I somehow remember her being determined for us to continue waiting.

We were there to see Muhammad Ali after all.

There, on the border of Fordsburg and Newtown, in downtown Johannesburg, the school building, then as now, was a humble relic of the cityâ€™s fraught history. But somehow it was a stop on Muhammad Aliâ€™s tour of South Africa, in 1993. I did not recall the year, as I usually do, by which grade I was in at school. It took some furious Googling to finally discover among the many, many tributes to Ali that have been published since his death, that Ali visited South Africa in 1993. I would have been a whole nine years old.

I donâ€™t think I could have possibly known anything about Muhammad Ali back then. How could I have understood his greatness? I might have known he was a boxer – a great boxer – only because my parents are avid sport fans.

I donâ€™t think, however, I could fathom why it was important for my mother to want her children to see him. And while my sister must surely have been with us in the car that day, I donâ€™t actually remember her being there.

In my mindâ€™s eye, it is just my mother and I, waiting for Ali outside the school gates. I donâ€™t recall what happened next. But I do remember later that day driving past the 23rd street mosque in Fietas. Mohammed Ali was expected there too. And I remember the many, many cars parked outside. Here too, people were waiting for Ali.

Between the school and the mosque, I donâ€™t remember actually seeing Muhammad Ali. I donâ€™t even know if he did eventually visit Fordsburg and Fietas that day. But this memory of waiting for him intrudes on me every so often.

I cannot claim to have had my life immediately altered by the sheer act of waiting for him. But I can understand now, how important it was for me, as a child, to understand, without it being said, that people with skins tainted by the gaze of the oppressor – people with names like mine – could also touch the world.

We are, I think, at any moment, a complex product of time, and memory, being, and ambition. And, I think some part of who I am now was undeniably formed by that child in the car, waiting for the light of Mohammed Ali to grace the halls of her familiarity.