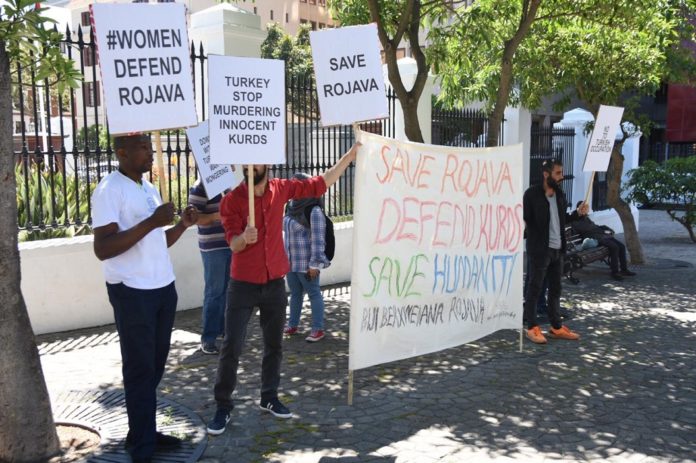 Mahmoud Patel, a professor at the University of the Western Cape and executive member and chairperson at Kurdish Human Rights Action Group South Africa spoke to The Daily Vox on Wednesday. This was during a protest against the Turkish government’s recent incursion into Kurdish-held territory in northern Syria.

South Africa has a policy on the Kurdish struggle. It is a part of foreign policy. At the last policy conference, the policy was adopted just like it is for Palestine, Western Sahara, and Sahrawi. South Africa has a moral high ground to stand up for human rights when they are violated anywhere in the world. More so currently in Rojava with the recent invasion, which is an illegal invasion into northeastern Syria by Turkey.

Rojava refers to the autonomous administration of North and East Syria by Kurdish people.

As we speak, 300 civilians have been killed. A convoy of journalists was bombed two days ago. A lot of human rights violations are taking place. A young progressive leader who was bringing all the different communities together was killed. Her murdered body was mutilated by jihadist proxies supported by Turkey.

Earlier this month American president Donald Trump ordered out the roughly 1,000 American forces who had operated for years in northern Syria. These forces have reportedly shielded the Kurds from a Turkish offensive. The Turkish military has since launched an offensive against the Kurdish forces in the area, which it brands ‘terrorist groups’.

What is currently happening in Rojava in the past few years – especially this year after the official defeat of ISIS – they’ve built an egalitarian society. It’s a society where women are accorded not only equal rights, but they also have decision making power, whether it is in the administration, whether it’s in the military battalions in the YPJ. Even here in South Africa, women formally have equality, in terms of a constitution but our society is still very patriarchal. In fact, their struggles were inspired by our African struggles and South Africa.

Hundreds of people whether they are Arab or whether they are Azadi have all joined together precisely because of the democratic values and the philosophy that you use in Rojava. This is inspired by the thinking of Abdullah Öcalan who is currently incarcerated.

Öcalan is a Kurdish leader and one of the founding members of the militant Kurdistan Workers’ Party. He was branded a terrorist by the Turkish government and given a life sentence on the prison island of Imrali.

We want the invasion to stop. We demand that a peaceful dialogue takes place with all the parties concerned. We want all parties to be part of this process and for it not to be decided by foreign powers who are not on the ground. The people themselves must decide. We want the South African government to take diplomatic and political stances to say no to human rights abuses committed by Turkey, against the indigenous people.

All images by Mohammed Jameel Abdulla