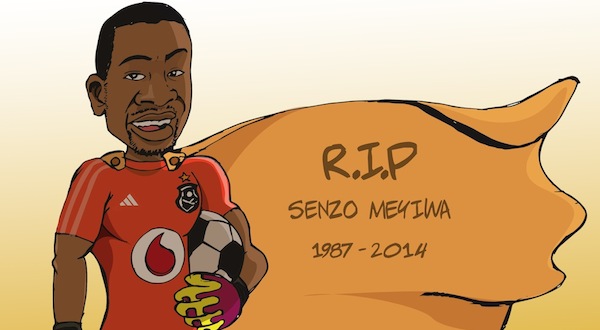 The death of the Bafana Bafana and Orlando Piratesâ€™ goalkeeper Senzo Meyiwa has shocked South Africans and police are now investigating what appears to be an act of crime.

We have to brake normal protocol. We

on arrival at hospital.

Meyiwa was shot in the back on Sunday night while allegedly attempting to protect his girlfriend, Kelly Khumalo, from intruders. He was announced dead on arrival at Botshelong Hospital. The incident occurred at Khumaloâ€™s home in Vosloorus township near Boksburg.

Seven other people were said to have been in the house when a man entered and demanded residents hand over their cellphones. Another suspect waited outside the house. Police say a third man fled the scene after the gunshot was fired.

A special task team has been set up to investigate Meyiwaâ€™s death, and police are now offering a reward of up to R150,000 for any leads. According to EWN, police have begun a â€œmassive manhuntâ€ for the suspects, and National Police Commissioner Riah Phiyega has confirmed police have opened a case of murder and robbery.

The incident happened at around 20h00, Zamo Section in Vosloorus. Reward of up

Friends and colleagues of the sports star have taken to social media to show their shock and sadness at the news of Meyiwaâ€™s passing.

Good morning SA we are deeply ,shocked by the passing away of Senzo Meyiwa. Its a

sad day for South Africa ,his family and Orlando Pirates.

Fans of the goalkeeper also expressed their grief.

Rest In Peace Bra, Pirates Will Never Be The Same Without You #SenzoMeyiwa â€” Tha_Bee_SaW! (@ThaBiS0_Botsane) October 27, 2014

A person who dies trying to protect what he loves. In my book that’s someone I’d call

For some, the concern is whether the police can fulfill their duties.

and other murders are senseless. Cabinet have 5378 police to protect them. Are we

Wat the hel wil it take 4 police to take notice and actually stop crime,criminals in this country are the law unto themselves #SenzoMeyiwa â€” RIP-MY-NO1BAFANAKIPA (@L_Moabelo) October 27, 2014

Others thought it showed that the SAPS can act effectively – at least some of the time.

to #SenzoMeyiwa‘s murder reminds us what our police CAN do. Just

wish applied to all crimes.