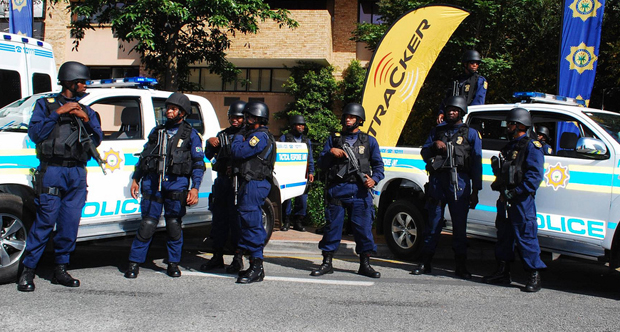 The SAPS has once again shown how poorly trained it is in terms of public order policing.Â This time, police shot a toddler in the head with a rubber bullet. They were lucky the little boy didn’t die.

Four-year-old Siyabonga Gama was caught in the line of fire and injured by a rubber bullet during a land-grab protest in Diepsloot, north of Johannesburg over the weekend.Â The Daily Sun reported that Siyabonga had beenÂ playing outside with a neighbourâ€™s daughter when the incident occurred.

When Nozuko Madala (38), the mother of the little girl, went outside to look for her daughter, she was confronted by police who told her to go inside â€“ and then opened fire. A stray bullet hit Siyabonga above his left eye, leaving a massive gouge and blood streaming down his face.

A shocking photo of the boy and his horrific injury was published on the front page of the Daily Sun on Monday.

Thandeka Gama (23), Siyabongaâ€™s mother, said that she wants to sue the police. â€œThey must find out why they shot my boy. I want them to pay for their actions,â€ she told The Daily Sun.

According to the police, the protest began when a group of about a hundred people tried to occupy a piece of privately owned vacant land. They came to the site bearing materials to build shacks and barricaded the road with tyres and other objects.

The protesters reportedly threw stones at the police who were patrolling the area by foot. Crowd-control police and a tactical response unit were deployed to the scene, and the police proceeded to shoot rubber bullets at the crowd.

#sapsGP An apparent land grab by a group of +-100 in #Diepsloot this am involved road barricades, police deployed SD pic.twitter.com/pj5OPSjlUJ

On Sunday, Daniel Mavimbela, a spokesperson for the Diepsloot police, Â said that things have returned to normal since the protests.

â€œThe situation in Diepsloot has remained calm. The police are monitoring the situation. No incident has been reported,â€ Mavimbela said.

Mavimbela said that the boy was receiving medical attention for his injuries and that an investigation will be conducted to determine the cause of the shooting.

Read more about the incident at The Daily Sun.