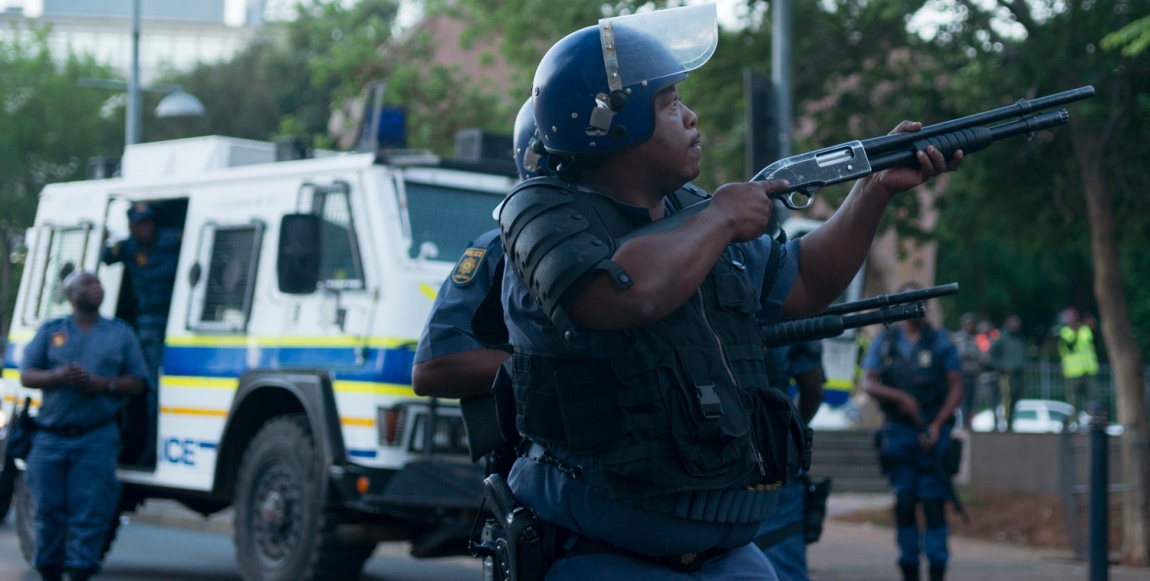 IPID spokesperson Moses Dlamini said in a statement on Monday that a constable and a captain were facing murder charges following their arrests. “The IPID has concluded its investigation; only two technical reports are outstanding,” Dlamini said.

The arrested officers will appear at the Soshanguve Magistrate’s Court on October 23.

UPDATE 1* Students at the TUT Soshanguve campus have pledged to march to the local police station every day until the case of the student the police killed shot “is resolved.”

TUT management is set to meet with students from the various structures on Monday to resolve students’ grievances. Later, a higher level meeting with management, the police ministry and delegates from the department of higher education is set to take place, TUT spokesperson Willa de Ruyter confirmed in an interview with The Daily Vox.

Meanwhile the Economic Freedom Fighters (EFF) issued a statement condemning the killing of the student. The party expressed it’s heartfelt condolences to the family, friends and student community in general.

“It is no doubt that if the ANC government is not imprisoning students, they send police to use live ammunition on them,” the statement read. It also said that responsible parties must be brought to the book with immediate effect and that our universities must be gun-free zones.

Violence broke out at the Soshanguve North campus of Tshwane University of Technology (TUT) during Student Representative Council (SRC) elections on Thursday. In the chaos, police shot one student dead, the university confirmed on Friday.

Mara TUT Soshanguve Campus Elections gone wrong and a student was shot to death by the police @EFFSouthAfrica @CyrilRamaphosa pic.twitter.com/p53BuwkF8v

Who will govern the institution after today’s voting?
Will it be :

Havoc broke loose after allegations that the elections were rigged.

Behind the scenes of the SRC elections

“The voting station was supposed to open at 9am but it opened at 10am. There was a long queue of students who were waiting to vote. All of a sudden, at about 2pm, the officials said there was a shortage of ballot papers,” Amanda Mavuso, a member of the EFFSC said in an interview with The Daily Vox.

“We asked why is there a shortage of ballot papers? Why did you only print 1,500 ballot papers when you know this is an institution that has over 15,000 students? We also wanted to know why they weren’t printing more while students were voting if they knew the papers were going to run out?” she said.

Voting was halted for about two hours while officials were busy printing papers. Campus security had locked the party agents inside. However, according to Mavuso, the only party agents present were the SCO, the EFFSC, Daso and Pasma. Voting agents were alerted to allegations that ballot papers were being smuggled during the voting. This led the group to suspect that Sasco and the ANCYL, who were not present, were behind the rigging.

A student was shot by police today at North TUT campus. This happened when we as structure found out that the ANCYL and Sasco bought ballot papers after seeing that EFFSC was winning.

By the time the agents were released, chaos had broken out and the campus security had called police. Police opened fire attempting to disperse students.

“They literally shot the student right in front of me,” Mavuso said. At first, Mavuso said she thought the police were firing rubber bullets. “I thought, how can someone who was shot by rubber bullets can be bleeding so much?” she said. “I told my friend it was like we went back to 1976,” said Mavuso.

A Pasma student leader who did not want to be named also told The Daily Vox that Sasco and the ANCYL were rigging the ballots. “This angered the students and then all hell broke loose,” the Pasma member said.

The Pasma leader confirmed that the student who had died was a Pasma member as well. “He passed away in the ambulance on the way to the hospital,” the Pasma leader said.

The leader said they were surprised at how quickly the police turned up. “Soshanguve is a very dangerous place. We always call police to assist us with crime. But when we call about crime, they don’t come,” the student leader said.

Pasma is still finalising details with the family of the deceased student for his memorial.

“The disruption happened when the [ANC] Youth League were found smuggling fraudulent ballot papers during the voting,” Shepherd Khoza, deputy secretary of Sasco at TUT, said in an interview with The Daily Vox.

“Through the anarchy, while police were trying to disperse students, they aimed wrong and a student lost their life,” he said.

Khoza said Sasco was not involved in the rigging of the voting. The organisation that was involved in all this chaos is the Youth League, he said.

“Our relationship with the Progressive Youth Alliance (PYA) is confusing to students,” Khoza added. The PYA is made up of the Sasco, ANCYL, Young Communist League and high school representative body Congress of South African Students (Cosas).

“I can assure you we are a standalone organisation, not in anyway affiliated with the Youth League,” Khoza said.

Daso released a statement calling for calm and order at the Soshanguve campus, condemning the use of force and sending condolences to the friends and family of the deceased student.

DASO calls for calm and order at TUT Soshanguve pic.twitter.com/Mhs09zLU0g

The SRC elections of Thursday were declared null and void.

The ANCYL declined to comment to The Daily Vox, instead referring us to TUT spokesperson Willa de Ruyter.

Management shut the campus down, students are protesting

In a statement, spokesperson Willa de Ruyter said: “It’s still very sketchy what happened there. We have started an investigation and we are working closely with the police”.

De Ruyter confirmed that police killed a student in a shooting incident. “That is part of the police investigation. They have opened a murder docket,” she said.

The university said it would help police find out how the student was shot, and work with the independent voting body to investigate the rigging allegations.

It also wants to know how a firearm was allowed on campus. “We have weapon free institutions, so we don’t allow weapons on campus,” said Ruyter.

In a report submitted to the Independent Police Investigative Directorate (Ipid), who are investigating the deadly shooting, officers claim that they aimed their R5 rifles at the ground and that no one had been injured by the time they left the scene.

Cicil society organisation amandla.mobi have started a petition to stop the police using the R-5 rifle, which is a military grade assault rifle, in protests.

The campus rector cancelled Friday’s classes but confirmed that the campus would still be accessible. Students and management held a meeting at 10 am.

Protesting students in Soshanguve also set some of the facilities on fire in protest. An assessment of the fire is underway.

#TUTShooting Angry students have resorted to the destruction of property. The newly refurbished TUT FM was not spared. PP pic.twitter.com/ilaHKWqFeW

Students at TUT’s Ga-Rankuwa campus have reportedly shutdown the institution in solidarity.