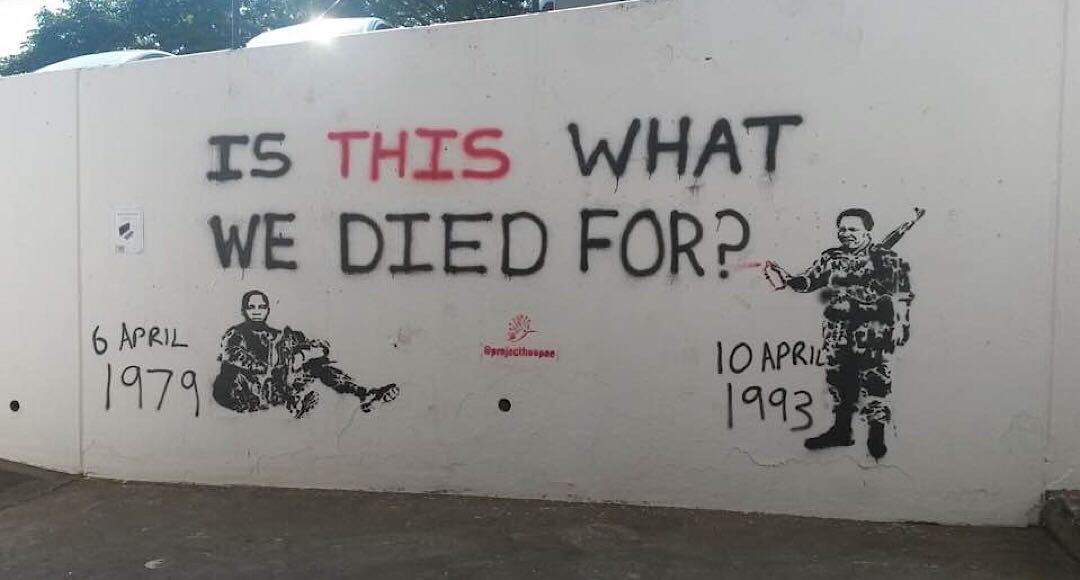 Solomon Kalushi Mahlangu is etched into the history of South Africa’s anti-apartheid movement. On April 6, 1979, the apartheid government hanged him. Mahlangu was only 23-years-old when he was killed, falsely accused on charges of murder and terrorism. Now, 40 years later the South African government has declared his home a national heritage site. But there are other ways that Mahlangu’s legacy continues.

BY SHAAZIA EBRAHIM and FATIMA MOOSA

Meaning: “Oh Solomon, The Umkhonto we Sizwe soldier. He killed boers in Africa.”

Chants of “Iyoh Solomon” became the rallying cry during the 2015-2017 Fees Must Fall (FMF) protests. The moment anyone started singing the song it usually meant things were going to get lit during the protests.

The origin of the actual song is murky with many within the African National Congress (ANC) claiming the song as their own without any definite proof. Some ANC members have said it was by an unnamed member of the ANC Youth League (ANCYL). Others said it was an old song of the ANC’s former military wing, Umkhonto we Sizwe (MK) which Mahlangu was a part of.

During an ANC national general council in 2010, ANC member Sihle Zikalala said: “This is a youth league song aimed at conscientising young people about the contributions of their peers during the struggle. It is not a new song or an MK song but is about our young comrades celebrating and acknowledging the role of Solomon Mahlangu, a young MK cadre who paid the ultimate price for his contribution to the struggle when he was executed.”

A symbol of Fees Must Fall

With the cries of the aforementioned “Iyoh Solomon” reverberating through universities through the height of the student protests, Mahlangu became a symbol of the movement.

We’ve all heard one student leader or another quoting what legend says is Mahlangu’s final words: “My blood will nourish the tree that will bear the fruits of freedom. Tell my people that I love them. They must continue the fight.” A plaque at the Mamelodi Cemetery reinterred on April 6, 1993 bears these very words.

Student leaders drew inspiration from the words of the young revolutionary to continue the fight for free education.

As universities are pressured to transform, there are increasing efforts to make the university a more inclusive space. “It’s important because of representation, in terms of people of colour feeling, Okay there’s space for me here because there’s a building that has a name that’s similar to mine,” Wits student Elly Ngoma told The Daily Vox about the renaming of the building.

The school is situated in Mazimbu in Morogoro, Tanzania on a dilapidated sisal farm the Tanzanian government donated to the ANC in 1979. The school’s purpose was to educate the growing number of youths who were fleeing the apartheid regime in that time period. Somafco was to produce the kind of South Africans who would lead in a free, democratic, nonracial, nonsexist, and non-discriminatory country.

With the assistance from volunteers across Africa, Europe (east and west), the Scandinavian countries, the United States and nations in the Caribbean, by its 10th anniversary in 1989, Somafco was a complete settlement. It housed a hospital, factories, a farm, maternity settlement, a crèche, primary and secondary schools, and an adult education programme.

In his hometown Mamelodi, Mahlangu is commemorated through the Solomon Mahlangu Freedom Square. On the anniversary of his death in 1993 his body was reinterred in Mamelodi at the Mamelodi Cemetry. A plaque stands there with his supposed last words: “My blood will nourish the tree that will bear the fruits of freedom. Tell my people that I love them. They must continue the fight.”

The apartheid police orginally buried his body in Atteridgeville fearing protests. A bronze statue of Mahlangu stands in the square erected in 2015. The Solomon Mahlangu road in Durban was also named in his memory.