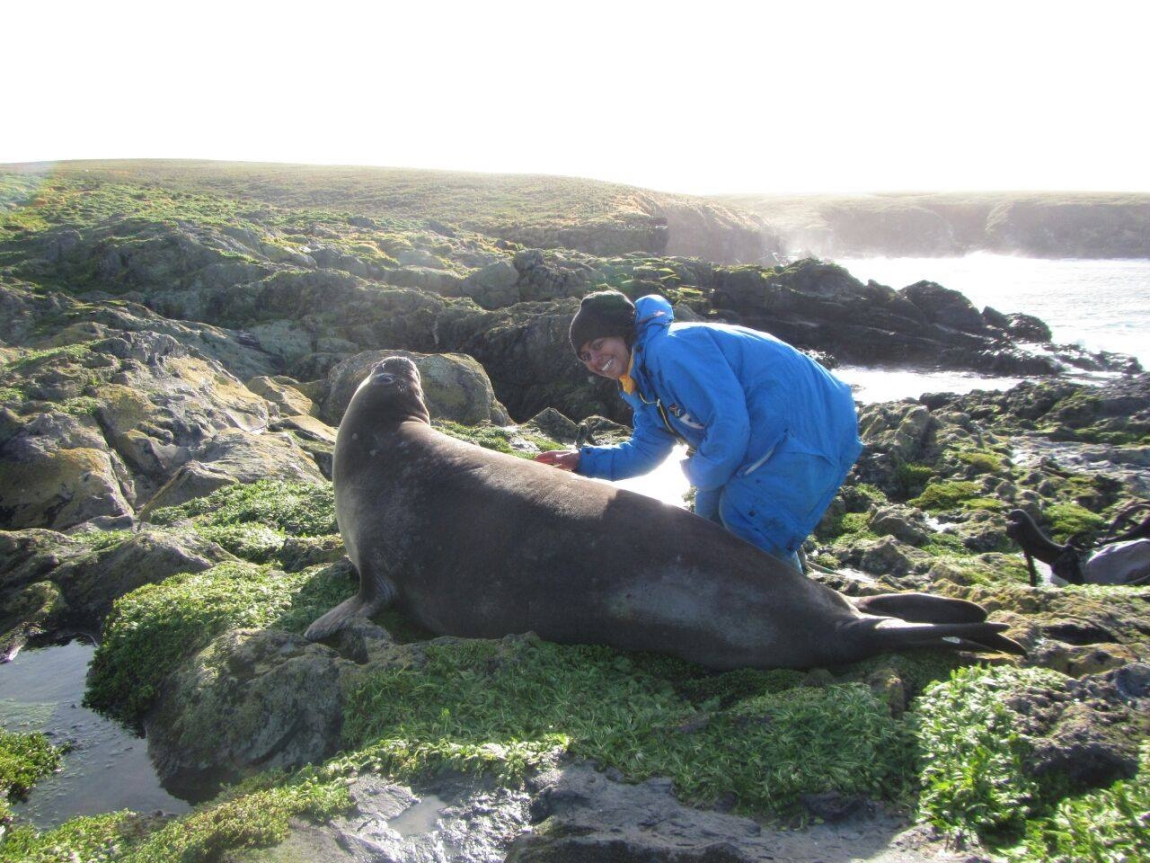 Her guidance counsellor thought marine biology was a pipe dream. But Nasreen Khan (30) stuck to her guns. She recently returned from a year on the subantarctic island reserve of Marion Island, where she studied seals, penguins and killer whales as part of the South African National Antarctic Programme. She told The Daily Vox about the experience.

From a young age, I was fascinated by the ocean and all its creatures. I had my mind set on marine biology from grade 7. In grade 12, I told my guidance counsellor what I wanted to study and she was shocked; this was something absurd to her. She said it seemed I didn’t know what I wanted to do with my life. She was convinced I should take up health sciences or law. That affected me as a young person living in a small town like Ladysmith and having such big dreams; it made me question my choices. Fortunately, my parents were very supportive and always encouraged me. In the end, I studied zoology at the University of KwaZulu-Natal, then did postgraduate studies and a master of science in marine biology.

I heard about the programme on Marion Island in my second year and have been applying for it ever since. On my second try, I was shortlisted and on the third application I made it in. It was a dream job – to experience pristine lands and witness animals flourish in their natural ecosystems.

There were three of us that observed fur seals and elephant seals on the island. My job also entailed killer whale surveys. The whales come so close that you could almost touch their dorsal fins. But you wouldnâ€™t want to get into the water with them; the water is so cold you would probably die of hypothermia within a few minutes. I got the amazing opportunity of naming two killer whales; these whales were part of a pod with two other named whales; Hercules and Xena. I named one Ayesha, from Guardians of the Galaxy and one Shah Khan, adapted from Rudyard Kiplingâ€™s Jungle Book. The catch of this story is that they’re actually named after my parents.

Working with seals require vigilance and respect. Fur seals are huge; adult males weigh around 88kg. We have to do various observations with them, like weighing them from birth till they wean. One day, there was a seal that I hadnâ€™t noticed and we startled each other. It bit me on the leg and ran off. I thought it had only bitten a hole in my pants. Because of the shock, I didn’t notice till much later that it had bitten through to the skin. You need to be extra careful around them. Itâ€™s when you get too comfortable and donâ€™t pay enough attention that something scary might happen. Elephant seals in comparison are gigantic, weighing in at 4000 kilograms and up to 3 metres in length. We conduct elephant seal censuses, which is the backbone of elephant seal research; the data is used in a long-term scientific mark recapture program. During elephant seal mating season we work in twos, because of the danger involved. Someone always has to watch your back to ward off charging seals. Once a massive elephant seal bull charged us and grabbed our equipment – a net and two poles for weighing seal pups – and flung it. If you see them coming, you just have to leave your stuff and run. The alpha male takes control of a beach and can have a harem with as many as 50 females at a time; these guys are the â€˜beach mastersâ€™. All they want to do is have the beach and females to themselves and you’re a distraction.

During the first few months of the year, out of breeding season, when the seals are more placid, we work alone. Most of the island has no proper paths, just landmarks like hills to lead the way. On an island that was new to me, and owing to inexperience, I ended up hiking an hour in the dark. If youâ€™re not in a hut or back at base by sunset they give you a 30-minute leeway and then they start searching for you, so there was always the added stress to get back before the sun sets.

I realised quickly that Marion demands absolute respect. The elements and the terrain chisel you down to your very core, and flaunt your worst fears in front of you. Itâ€™s the toughest place Iâ€™ve ever experienced. I once got caught in a blizzard in -12 degrees wind-chill, unable to see my surroundings, and being utterly lost. But one quickly gets used to the challenges, the fears are demolished. It took me about 100 days to get accustomed to the extreme rain, wind and cold on the island. During elephant seal censuses, I had to work efficiently, navigate through the island and get back to base before dark. On one occasion it had rained throughout the night and the rivers were extremely full, crossing them became very dangerous and time consuming. I had to hike upstream to a point where I could jump across the river and then head back down to the beach to complete my work. This was very stressful as it was getting dark, I didnâ€™t want to walk in the dark or have a search party sent out for me.

Finally I got to base after the sun set. But the next time I went out, the rivers were bone dry, I was so grateful. How would I know to be grateful for something as small as a bone dry river? This made me realise that difficulties in life are there so you can appreciate the ease. Things are not easy on Marion Island. I learned not to pray for an easy life, as ease leads to stagnation. What Marion Island taught me is to pray for the strength to conquer anything.

Tough experiences build strength. We only know how truly powerful we are when we test the boundaries we set.