Home Education #StopRacismAtPretoriaGirlsHigh is just one example of the frustration of black learners in...
WhatsApp
Facebook
Twitter
Email
Print 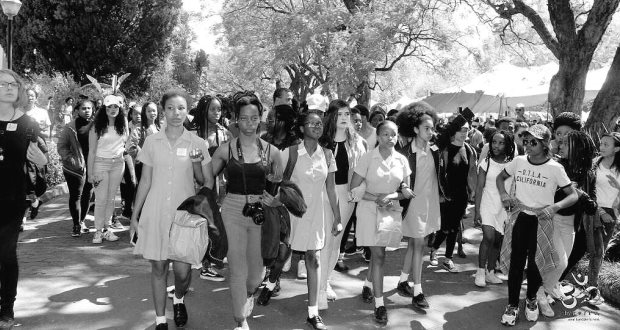 Where the blue of heaven is deepest. Every person who attended Pretoria High School for Girls knows the opening to the school song. But for many, myself included, PHSG became a version of hell on earth.

On Saturday the 27th of August, Pretoria High School for Girls held its annual Spring Fair, where members of the public are encouraged to attend and spend time at the dolled-up school, eating food and playing games while the students work at the stalls and rides brought in specially for the day. It usually goes quite smoothly and brings in funds for the school. However, this year, Spring Fair saw protest action.

A group of young students had organised a silent march around the school to protest against rules and regulations on the hair of black students. The march was organised as a reaction against weeks of administrative interference in students’ lives. Marchers stated that in prior weeks, other incidents involving black girls’ hair and allegedly racist and inappropriate comments by teachers created an increasing frustration among the students. During a civvies day last week, a group of students wearing all-black clothing and doeks were surrounded by school guards during an outdoor assembly, because their clothing was regarded as “politically motivated.” At the Fair itself, there was a large number of armed police and a K9 unit, which have never been present before.

As a former student myself, I can attest to the fact the PHSG has numerous unnecessary and indirectly racist (not to mention sexist, homophobic and transphobic) rules regarding hair, clothing and religious and cultural ornaments. The peaceful march ended abruptly when teachers and volunteering parents intervened and threatened to call the police to arrest the girls, most of whom are in grade eight.

Social media exploded on Sunday evening when videos and photographs of the events were circulated through Twitter and Facebook, sparking yet another necessary conversation about the state of coloniality which continues to pervade South African society post-1994.

The incident at PHSG is not isolated. The frustration and helplessness that these students feel are not limited to this school. The attitude of South African schools, in particular former Model-C schools, and indeed the South African education system as a whole, is racist and steeped in coloniality and imperialism. The constant policing of the clothing, hair, bodies and behaviour of women of colour takes its toll on the psyche of young girls, who must begin to unlearn and recover from their education in the tertiary sector.

My heart is so sore woah. Now you must revolt against an entire institution as a 16yo when your focus should be books + extramurals?

At these schools, we are taught to aspire to whiteness. White femininity if the beacon of success. Aspiring to white femininity means changing your accent, your dress, your hair, your body and even the way you think. As a young, impressionable adolescent in high school, you don’t realise you are being brainwashed, and you can’t fight back because your white teachers have too much power over you. So you sit, and listen to the insults to your intelligence, your background, your race and culture and religion, and you begin to believe them. You begin to assimilate to white culture. But it’s never enough. You will always be a few steps behind, because you are not white.

The recent efforts to decolonise the tertiary education sector seems to have trickled down into high school. More and more young people are refusing to bow down to the colonial and imperialist structures that have held us in its grip for centuries. It is inspiring, it is disarming, it is terrifying. The powers that be within all structures are continuing to bar changes. We see this with the increasing number of interdicts being placed on universities such as UCKAR, and the use of police violence and shooting at universities such as WSU.

It is terrifying that a 13-year-old girl in school uniform needs to cross her arms at an old white man to defend her blackness. If thousands of young adults in university are being silenced, what chance do these teenage girls have?

All we did was walk.

Yet they threatened to call the Feds on us.
Why?#StopRacismAtGirlsHigh pic.twitter.com/496I9p6XHu