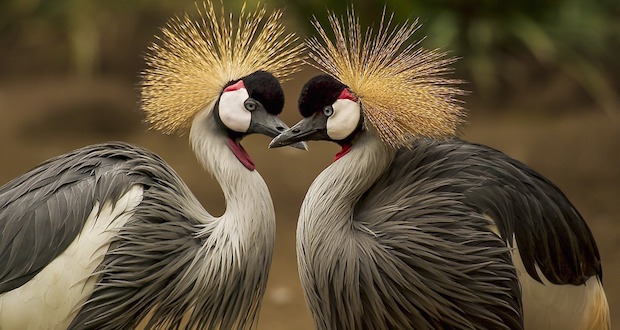 Dear Bishop Dag Heward-Mills (and all those living under rocks believing that homosexuality is “unnatural” because other animals don’t partake in it):

But, just for control, here are 10 examples – of the over 450 documented cases – of queer behaviour in the animal kingdom.

1. Dolphins, orcas and other porpoises

Let’s begin with some majestic mammals of the seas and rivers. Male bottlenose dolphins in particular move in all-male groups and sometimes form lifelong bonds with other male dolphins. They travel together constantly, guard each other from harm, and engage in regular sexual activity up until old-age. Sometimes the relationship involves three or more males – meaning we might have to throw monogamy out the window of what’s “natural” too.

A pair of male flamingos, named Carlos and Fernando, from the Wildfowl & Wetlands Trust in Gloucestershire, are a common example of homosexual flamingo couples which remain together for life. The pair, out of a desire to rear their own young, are said to chase other nesting flamingos away so that they can raise the chick as their own. The pair are able to raise and feed chicks without the aid of a female by producing milk in their throat. Suppose it’s what happens in flamingo society when the option to adopt hasn’t been legislated yet.

Bonobos are famous in the natural world as being promiscuous and intimately sexual primates #HoeIsLife.

According to Dr Zanna Clay from Emory University in Atlanta,”[Sex] is used to reduce stress and competition, develop affiliations, express and test social relationships and for reconciling conflicts and consoling victims in distress.”

Interestingly, Clay also found that female bonobos tend to vocalise more during sex when another female of higher social status is close by – in order to advertise themselves sexually. Looking for a blesser maybe?

Giraffes are one of the queerest animals out there. Males spend almost all of their time in all-male groupings and only interact with females when it’s time to mate. #Fuckboys. It’s estimated that around 80% of the male’s sexual behaviour happens between males – which includes necking, caressing and mounting.

Necking, for those who don’t know, is the giraffe version of cuddles.

A study done on wild male orangutans in Sumatra by the Wildlife Conservation Society at the Bronx Zoo have observed that the animals engage in homosexual behaviour. Well, the male ones at least. Researcher Dr Elizabeth Fox stated: “These observations add orangutans to the list of primates that demonstrate homosexual behavior as part of their natural repertoire of social and sexual behaviour.” Hear that? Natural. Repertoire. The observations on the orangutans provide evidence against previous assumptions that the behaviour only exists among orangutans in close contact with humans. It can’t be something learnt through social interaction because even the wild ones are queer.

Various insects and spiders take part in homosexual behaviour, despite there being no convincing evidence of evolutionary advantages to this behaviour in terms of reproduction. Dr. Inon Scharf of Tel Aviv University’s Department of Zoology and Dr. Oliver Martin of ETH Zurich argue that this behaviour is most likely as a result of these creepy-crawlies being unable to effectively tell the difference between males and females in their species. Androgyny is all the rage in the insect world.

In 2011, two African penguins in the Toronto Zoo shared a bond that included courtship and mating rituals – unfortunately the two were eventually separated and placed in separate enclosures with females to encourage breeding – but the zoo’s manager promised that they’d be reunited once they’d bred with the females.

This is just one case of the common occurrence of homosexuality in various penguin species.

This study looked at why certain rams preferred other rams over ewes, looking at genetics and the difference in certain cells within the queer ram’s brains. Doesn’t get much more natural than biology, does it?

A study by Marco Riccucci from the Natural History Museum in Florence found that bats partake in bisexual behaviour in a manner similar to the bonobos. The researcher in fact, kept bats in captivity and observed their sexual interactions and goes to great length to describe them.

“Attempted and actual mounts were also seen during “play” between pairs of mature females, pairs of males, by a mature female to a male, who also groomed his genitals….” reported Riccucci.

The Laysan Albatross is another of those birds that pair for life – which is on average around 50 years. During mating season, a mating pair will return to the same nesting site to conceive and take turns incubating their egg and jointly raise the chick until the end of the season when the pair part ways until the next season. Yet some female albatrosses enter same-sex pairings where theyâ€™ll conceive with a male yet nest with the same female thereafter. Pairings do change over time, but many female albatross pairings remain together for life. #LoveWins

Though to be honest, what is and isn’t “natural” in the animal world shouldn’t fully dictate what we accept as being moral in human society – especially seeing as rape and slavery – occur naturally within the animal kingdom, as it once did in human society. However, rape and slavery negatively affect others. Homosexuality really doesn’t affect anyone.

So, Bishop, does this clear things up for you? #ResearchGoals