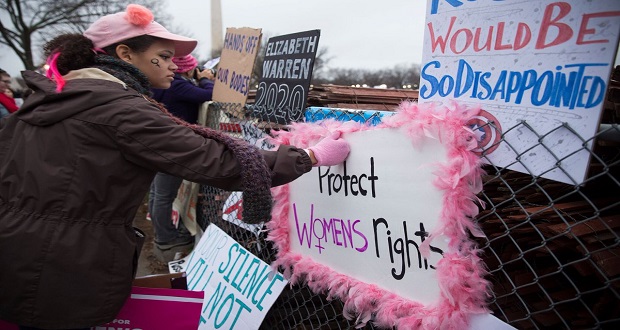 On his first Monday as President of the US, Donald Trump reinstated the Mexico City Policy, blocking US funding for health clinics that provide reproductive health services worldwide.  This was just two days after millions of women in the US and across the globe marched for women’s rights under Trump’s rule.

44 years ago, #RoevWade made reproductive freedom the law of the land. Yesterday, millions of us took to the streets to say: #WeWontGoBack. pic.twitter.com/y3fdcCZ0iX

But what does this mean, exactly?

The policy is a piece of legislation that blocks US foreign aid from assisting overseas-based non-governmental organisations (NGOs) that provide family planning services to women, with abortion as an option. Basically, this means US taxes cannot be used to fund abortion globally. It also means organisations that provide abortion counselling or advocate for abortion rights cannot receive funding, even if the medical procedure is legal in the country in question.

The policy is named for the location of the UN conference where it was announced and was first instituted by former US president, Ronald Reagan, in 1984. The policy is also known as the Global Gag Rule because it prevents public debate on abortion-related issues. Since then, US presidents have been back and forth about the contested policy.

In 1993, then-president Bill Clinton revoked the policy, writing in a memorandum that “these excessively broad anti-abortion conditions are unwarranted,” and the policy had “undermined efforts to promote safe and efficacious family planning programs in foreign nations”.

Since then, former presidents George W. Bush reinstated it, and Barack Obama revoked it. And now Trump has reinstated the policy all over again. Wow.

Trump represents the Republican Party in the US which is famously anti-abortion. The 2016 Republican National Platform, which stipulates the principles and policies of the Party, says:

“We oppose the use of public funds to perform or promote abortion or to fund organisations, like Planned Parenthood, so long as they provide or refer for elective abortions … rather than provide health care.” It also states that the Party “will not fund or subsidise health care that includes abortion coverage.”

Sean Spicer, Trump’s press secretary, told the media: “The president has made clear he is a pro-life president. He wants to stand up for all Americans – including the unborn.”

What does it mean for health providers worldwide?

The policy compels global health providers to accept the ruling and cancel all abortion-related services or to reject the ruling and lose the US foreign aid that many are reliant on. But it also has numerous other possible implications for women’s health worldwide.

Currently, the US Agency for International Development (USAID) is the largest bilateral organisation that funds family-planning services. Studies show that once the policy is implemented, the number of family services and clinics in a country decrease, which sometimes hikes the abortion rates.

How does a policy to stop funding abortion end up spurring abortion, you ask?

In addition to losing funding from USAID, global health providers also lose valued technical assistance and US donated contraceptives, including condoms, which are vital aspects of USAID’s family planning programme.

Reproductive heath group Population Action International (PAI) showed in a 2015 report that when the policy was reinstated by Bush Jr. in 2001, the US stopped donating contraceptives to 16 developing countries. The World Health Organisation (WHO) also published a report in 2011 where it found that abortion rates increased in sub-Saharan Africa when the policy was reinstated in 2001, likely due to lack of access to contraceptives.

Because lives are literally at stake here.

Marie Stopes International, which is a nonprofit reproductive health organisation, released a statement this week, saying it will not agree to the conditions of the policy and will no longer receive USAID funding.

Before Monday, the organisation partnered with USAID to provide contraceptive services to millions of women and girls across Asia and Africa. According to the organisation, without its services, Trump’s first term could cause 6.5 million unintended pregnancies, 2.2 million abortions, 2.1 million unsafe abortions and 21, 700 maternal deaths.

Marie Stopes is just one organisation that will no longer be funded.

“Attempts to stop abortion through restrictive laws – or by withholding family planning aid â€” will never work, because they do not eliminate women’s need for abortion,” said Marie Stopes International’s vice president and director for international operations Marjorie Newman-Williams, in a statement.

“This policy only exacerbates the already significant challenge of ensuring that people in the developing world who want to time and space their children can obtain the contraception they need to do so.”

The worldâ€™s most vulnerable women will suffer as a direct result of this policy, which undermines years of effort to improve womenâ€™s health.

“Women and girls who lack access to a choice of family planning methods are less likely to complete their education, have a career, or be able to pursue their plans and dreams for the future. They are more likely to experience an unintended pregnancy, and more likely to risk death and disability by undergoing an unsafe abortion,” says Marie Stopes International.

“A reduction of funding for comprehensive, voluntary contraception services will negatively impact not just women’s health but their opportunities for the future”.”

But other governments plan to fight back against this seesawing policy seemingly controlled by the US. On Tuesday, The Netherlands’ Minister for Foreign Trade and Cooperation, Lilianne Ploumen, announced a plan to launch an international fund to counter the effects of this policy. The fund, which would finance contraception, abortion, and education for women and girls in developing countries, would be supported by governments, businesses and social organisations.

Can we just say: considering Trump’s earlier misogynistic remarks, and behaviour, his pro-life stance seems less concerned with the rights of unborn children and more about controlling women’s bodily autonomy – a right which is enshrined in our own Constitution.