Home Features This is what we know so far about the terror arrests in...
WhatsApp
Facebook
Twitter
Email
Print 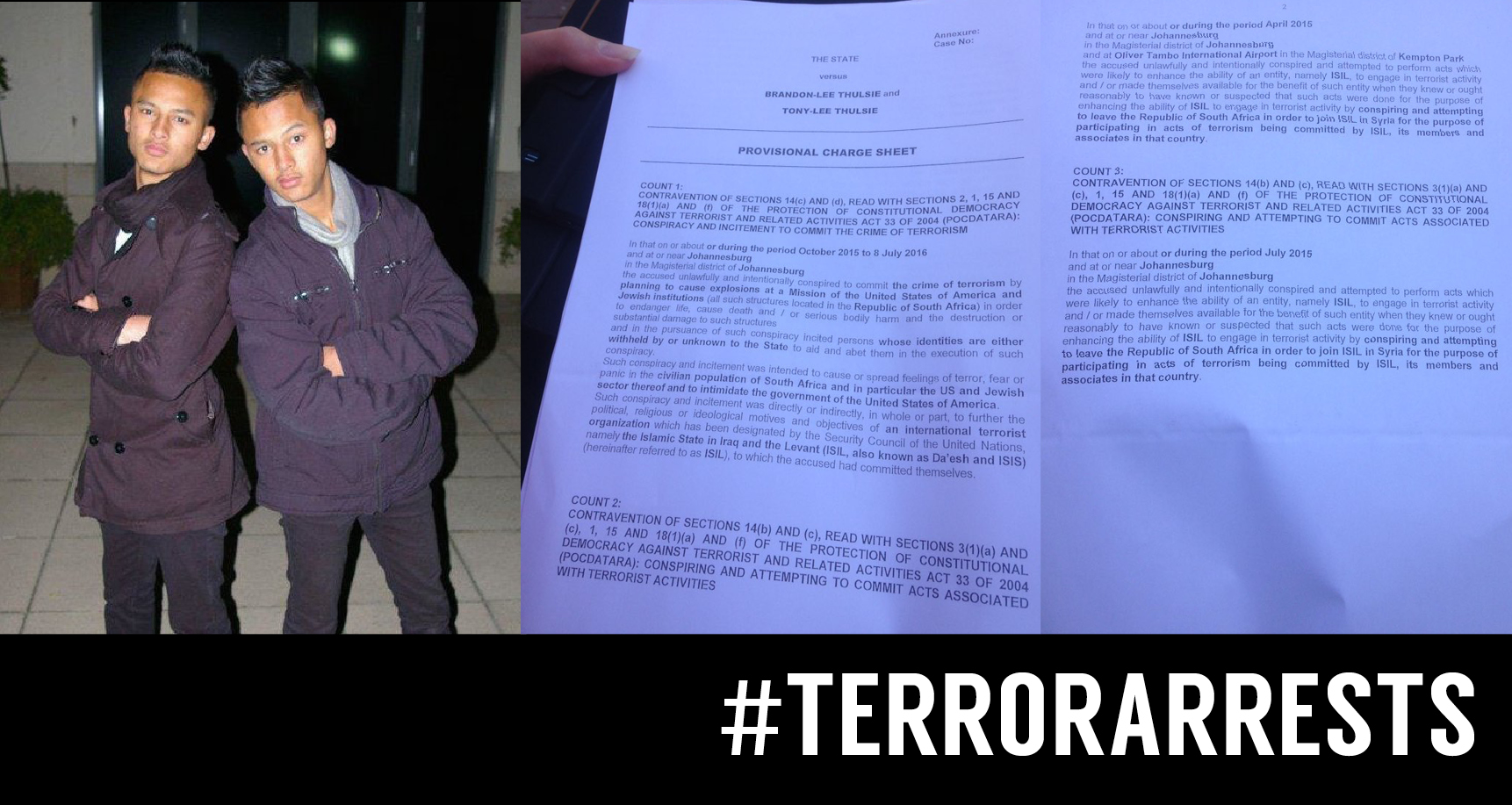 On Monday, two men identified in court papers as 24-year-old twin brothers, Brandon Lee Thulsie and Tony Lee Thulsie are alleged to have been planning an attack against the US embassy and Jewish institutions in South Africa.

From the charge sheet:

“The accused unlawfully and intentionally conspired to commit the crime of terrorism by planning to cause explosions at a Mission of the United States of America and Jewish institutions (all such structures located in the Republic of South Africa) in order to endanger life, cause death and/or serious bodily harm and the destruction… to such structures.

“Such conspiracy and incitement was intended to cause and spread feelings of terror, fear or panic in the civilian population of South Africa and particular the US and Jewish sector thereof and to intimidate the government of the United States of America.

“Such conspiracy and incitement was directly or indirectly in whole or part to further the political, religious or ideological motives and objectives of an international terrorist organisation which has been designated by the security council of the United Nations, namely the Islamic State in Iraq and the Levant (ISIL, also known as Da’esh and ISIS).”

Homes in two areas of Johannesburg, Newclare and Azaadville, were raided on Saturday ahead of the arrests. The Thulsie brothers were arrested in Newclare. A pair of siblings, who have been identified by their attorney Yousha Tayob as Fatima, and Ebrahim Patel, were arrested following a raid at a home in Azaadville on the West Rand.

The Patel siblings, who are 20 and 24 years old, were released after their lawyer brought an urgent application to the court. According to their legal representative, speaking on Radio Islam, the pairÂ were being held on charges related to the possession of firearms and explosives.

According to Tayob, Ebrahim Patel was in possession of a stun grenade acquired while he was an active member of the CPF in Azaadville someÂ years ago, while Fatima Patel was found in the possession of .22, 9mm and .352 bullets, which he said were leftovers from a hunting trip.

â€œEbrahim was charged under the Explosives Act and Fatima under the Firearms Control Act,â€ Tayob said.Â â€œWhat is worrisome though is the Hawks have used the Terror Legislation – the protection of constitutional democracy and terror related act, in issuing the search warrant. Weâ€™re not certain what they want to link it to, but weâ€™ll wait to see where it leads to.”

The brother and sister are said to be well known forÂ professing a militant ideology.

â€œThe warrants refer to communications and social media, encouraging terrorist acts with ISIL. So I have no doubt that these people were reported by someone in the community, or what we refer to as being â€˜pimped outâ€™, and then monitored thereafter,â€ Tayob said.

The Patels’ case is widely expected to be tied to the Thulsiesâ€™ case in the coming days.

3. So, erm, this is scary. But governmentâ€™s got our backs, right? Right?

According to Hawks spokesperson Brigadier Hangwani Mulaudzi the arrest of the four comes after they attempted to travel to Syria to join ISIL in 2015.

So #terrorarrests suspects coudnt even travel to Syria without being detected but wanted to attack the most fortified facility in S.Africa

So #terrorarrests suspects were reportedly planning to bomb the US Embassy in S.Africa. Indicative of the amateurism we dealing with here

And there were a whole range of government agencies involved.Â According to Mulaudzi, the National Intervention Unit, the bomb squad and other law enforcement agencies aided in the arrests.

“But we cannot say that the problem has been solved. [These] terrorist organisations are recruiting in our country… law enforcement agencies will continue to work around the clock to prevent any form of recruitment on our soilâ€.

4. Is South Africa now a target for ISIL?

According to Naâ€™eem Jeenah, director of the Afro-Middle East Centre (Amec), itâ€™s too early to tell.

â€œUp to now our view has been that there is no reason for South African to be seen as a target for Isil. With charges being brought, we wait to see whether indeedÂ SA is target. As yet, there is too little information to conclude that SA is target,â€ he said.

According to Jeenah, Amec has acknowledged for some time now, that the South African State Security Agency (SSA) has been best placed to deal with any links to ISIL in the country.

â€œOne thing has been borne out by this case, that SSA is best placed to handle this,â€ he said.

“As we have said in our various statements at different occasions in the past, the Muslim Â community in South Africa, does not condone any activities that either perpetrate or abet acts of terror,” Bham said. “We shall continue to uphold and advocate for the rule of law to preserve the peace that prevails in the New South Africa and beyond.”

ShouldÂ South Africa be paying more attention to terror-related issues? Tell us in the comments. And if you have further information related to the arrests, contact us via DM on Twitter.

Editor’s note: This story has been updated and corrected -Â A previous version of this story stated that the Patel siblings were a couple. This has now been amended.