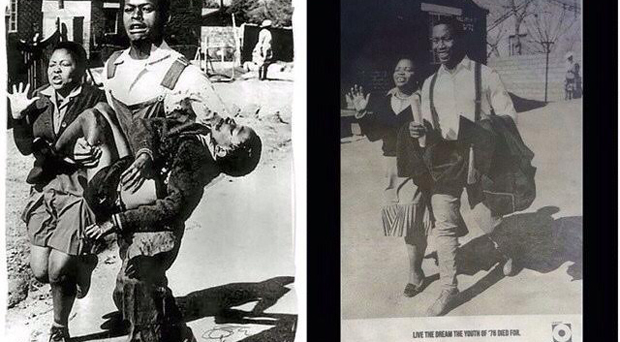 Ahead of Youth Day, music channel Channel O took out a full-page advert in national newspapers showing a recreation of the iconic image of Hector Pieterson being carried after being shot by the police. This time around, Pietersonâ€™sÂ body was replaced with a graduation cap and gown, and accompanied by the text, â€œLive the dream the youth of â€™76 died for.â€

The advert was designed by Don Dlanga, the brother of popular Twitter personality Khaya Dlanga, and some people were delighted by this spin on the world-famous picture, including tweleb Maps Maponyane and former DA parliamentary speaker Lindiwe Mazibuko.

Finally someone nails exactly what Youth Day is all about! Well done @BabyDlanga and @ChannelOTV – This is brilliant! pic.twitter.com/1058GBMwiB

This is so moving. “Live the dream the youth of ’76 died for.” #YouthDay #regram @zintathu @babydlanga

That ChannelO ad is doing exactly what it was meant to. Getting the youth to remember and discuss the true meaning behind Youth day.

But not everyone shared these positive sentiments, saying that the depiction of Pieterson in the advertÂ is problematic for a number of reasons.

This Advert is rubbish, the issue of the youth of 1976 was not the issue of failing or that the youth of 1976 is an academic failure and that a body of hector Pietersen can replaced by a graduate gown is symbolic violence actually and this picture commits deeply political reductivism as if academia is the end goal/true liberation while we are still transforming these institutions that were part of killing Hector. fuck you south afrika A photo posted by Thabiso (@fistvoices) on Jun 14, 2015 at 3:17pm PDT

@fistvoices The ad is consistent with the overarching post-Aparthied narrative of erasure in the name of feeling good about freedom. â€” Rachel’s Hairstylist (@lebomashile) June 15, 2015

+ image is laden with so much pain and tragedy that any attempt to send a lighthearted/positive message using it makes ppl uncomfortable. â€” Immigrant duragjesus (@DuragJesus_) June 15, 2015

This tweep summarised the issues with the advert.

The ad is clever, yes but also problematic. It’s very ignorant/dangerous to recreate a violent history to make it palatable for advertising. â€” #MgcineniMambushNoki (@SivuSiwisa) June 15, 2015 So is it then, as someone said in the comments of the @fistvoices post, a â€œbrand win based on shaky shallow politics?â€ Dlanga tweeted his response on Monday afternoon.Â

Thank you to everyone that’s loving the ad and sees what we were trying to achieve with it, there’s too many to thank individually ? â€” Don Gorgeous Ngang (@BabyDlanga) June 15, 2015

Do you agree with what the ad was trying to achieve, or do you think itâ€™s a cynical manipulation of history for advertising purposes? Let us know in the comments below.