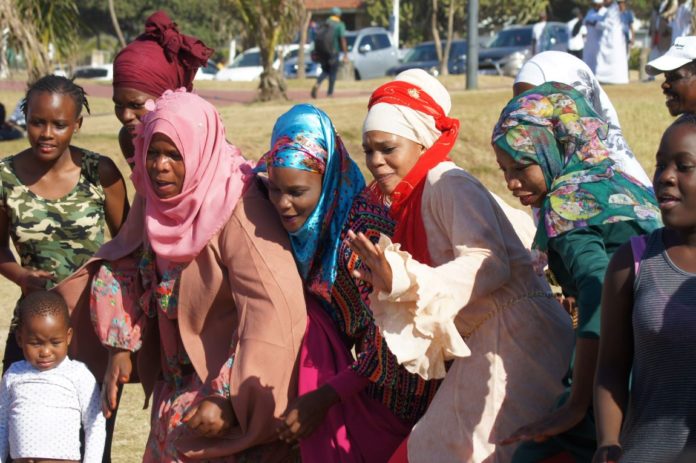 Hundreds of people from various Muslim communities joined hands and gathered at the Durban Bay of Plenty in celebration of Eid-ul-Fitr. The Daily Vox was in attendance.

On Wednesday, Islamic faith communities from as far as Pietermaritzburg, Tugela Ferry, Inanda, uMlazi and a few others celebrated their Eid festival in Durban north beach.

Coordinator of the event Nontobeko Mkhwanazi said the purpose of the gathering of specifically black Muslim people was due to the fact that “there are certain things that we like to enjoy as a black community because we share the same values, principles, and we understand each other better.”

By celebrating as a black community, Mkhwanazi said this was not a sign of isolation of any other races but a chance for unity among black Muslim community.

“It’s not like we are discriminating against the other groups since we are brothers and sisters, but at times it’s good to mingle amongst each other first order to know the issues and solve them before we can mingle with others,” Mkhwanazi said.

Walking into the Bay of Plenty in North Beach, women, men and young children were singing celebration songs and dancing. After a short while the group started feasting and exchanging food. Among people who were part of the celebration were home people who usually flock the beach front.

21-year-old Bilqees Nobuhle Mdluli from KwaMashu said being black and Muslim was not easy in the township, but the perceptions from other groups don’t deter her.

“It’s not easy because each and every religion has its own issues. We are being called different names and there are many debates surrounding our faith by people we grow through it,” she said.

Asked what Eid meant to her and how she feels about being gathered with different communities for celebration, Mdluli said: “Eid is very special to us as Muslim people. We are here to celebrate after a month long of fasting, and being surrounded by people from different communities is amazing.”