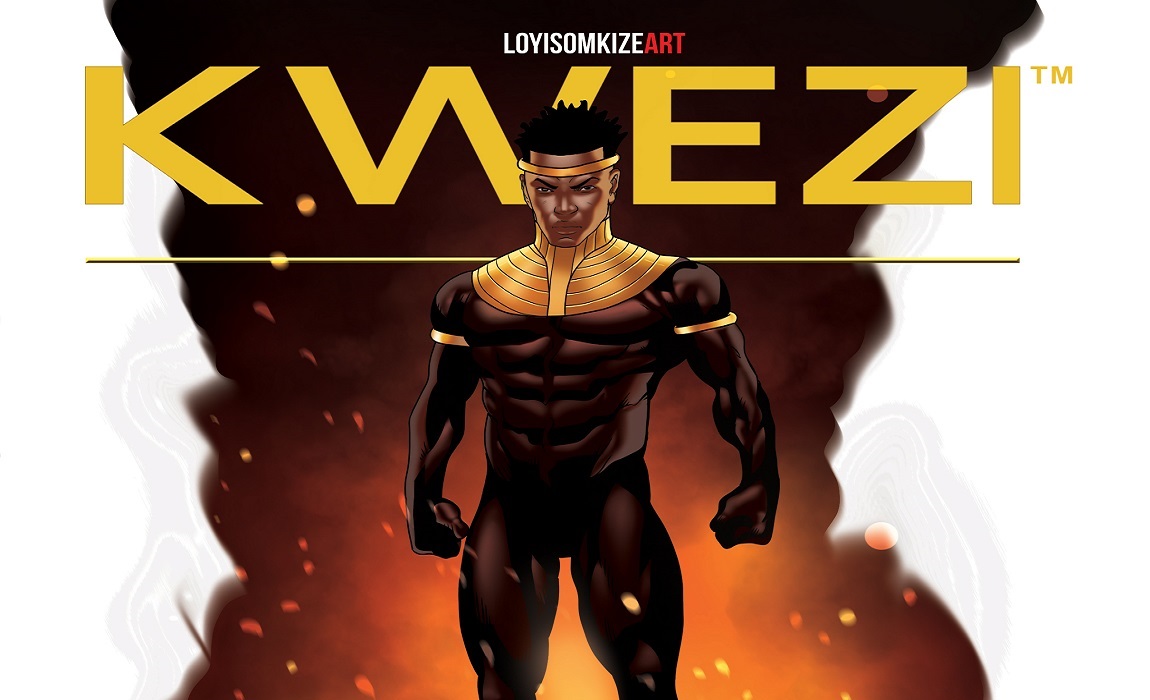 If you haven’t eagerly been following the adventures of South African superhero Kwezi, you’re seriously missing out. In 2014, Loyiso Mkize created Kwezi, about a 19-year-old city boy who discovers he has super powers. Together with colourist Clyde Beech and writer Mohale Mashigo, the dream team have collaborated to bring South Africans our very own superhero. At this year’s Comic Con Africa, SHAAZIA EBRAHIM and FATIMA MOOSA sat down with the Kwezi team to discuss creating Kwezi (and other possible titles), it’s worldwide popularity and superheroes.

Who does what in the creation of Kwezi?

Loyiso Mkize: The creation is very organic, the process is more about creative people coming together and throwing what they’ve got onto this project. I created the comic book, but I realised very quickly that I couldn’t do it alone so Clyde Beech happened. We were colleagues at Supa Strikas, I was head illustrator and he was head colourist. Fast forward a couple of years, then Mohale happened as someone else who could throw in some weight particularly to the structure to the story we’d developed. We’re the dream team who succeed individually and then come together for Kwezi.

Clyde Beech: I work on the digital side of things, I ink, I colour, I co-develop. Basically colour is taking a 2D image and trying to create 3D space including light, effects and distortion – and making it aesthetically pleasing.

Mohale Mashigo: He’s also downplaying that he’s one of our story developers, we all develop the story together.

CB: We sit together, we develop it, we have long brainstorming sessions. Everyone plays an important role in developing every part of it.

MM: It’s difficult for to say I’m just the writer because we develop the story together. One thing I do very well is to poke a hole in the big ideas and go: “Plot-wise, where does this go?”

So… do you all argue a lot?

MM: Arguing is the wrong word.

CB: We also get along well, we’ll call each other at any time during the day and just throw random ideas at each other. Loyiso will be inspired by something and give me a call, then I’ll build onto it. Then we’ll give Mohale a call and she’ll be like, “You see the problem with that is…”

MM: And we’re better for it, I’m proud of where we come. I’m proud of what’s to come because I think it’s us at our best. I’m proud of 10-12 because we got together, tied up loose end and – not to boast or anything, but – we did the things. We allow each other to fly creatively.

You say you’ve come to this point… Where next for Kwezi?

CB: The sky’s the limit.

LM: I believe there’s a lot going on here in this dynamic that can be expressed in other mediums. It’s the perfect time to start developing new content. We’ve got so many stories to tell and between us the talent is ready. We’re going to tie this up then we’ll hand over the reigns to new creators who will work on Kwezi.

CB: Why does Kwezi have to be the only piece of content? We have lots of content creators who exist, they just don’t have platforms. We hope that Kwezi inspires other creators to put out content. Loyiso took a risk…

MM: Risk is a huge part of it. Loyiso took the risk to create Kwezi and Clyde took the risk to go along with it. They took a risk on me because I’d never worked on a comic book. That’s how you start something great, you take a lot of risks. But we can’t stick to it forever when between us we can create four or five titles.

If you all could give some advice to young people who want to create content, what would you say? Besides taking a risk, that is.

CB: Put something on paper, create something digitally. The beginning is always at the start.

LM: Play on your strengths. That’s where your best stuff will come out of because it’s natural. If that’s writing, illustrating, painting then power to you.

CB: Don’t overthink the content. Create stuff that you would want to create for you. Create what you want and you’ll find that people will feed off the energy.

LM: A lot of creators are so self-defeating. You have a glorious idea and you’re so excited and yet you’re the same person that will knock yourself down.

CB: As you’re making a piece of art, you’re learning and becoming better. By the time you’re done with it, you look at it and you’re a better artist than when you made it.

Clyde, how did you respond when Loyiso told you about Kwezi?

CB: I looked at it and asked, “so you’re just creating black Superman?” Because I have such an encyclopedic knowledge of comic books, I could pick holes into every character. He convinced me. Yes our characters have characteristics that we see in Marvel or DC but those characters are not set in contemporary South Africa, they’re not something recognisable to us.

LM: We wanted to create content that was valuable and allowed readers to reimagine themselves, think “Wow I never thought a South African superhero would happen”. Did you think that the comic would be so popular around the world even if it’s set in a South African context?

LM: I played it up to myself before anyone even knew about it. You have to because you have to believe it. The intention was to get it out there. If it doesn’t exist and when it does exist, it’s going to blow up because someone out there was longing for this content. Just like I was when I was 16.

CB: There’s an important things because I spoke about this in a panel long ago where we pick up so much Western and American vernac. Even now when I speaking to you I’m probably using so much of what I’ve picked up from tv and movies. The way pop culture has influenced that way I speak…

CB: We are doing that in reverse by feeding it back. If we can watch a movie that’s from Ireland and they speak in Irish, we can still follow the movie. A lot of us enjoy Bollywood movies for instance and we read the subtitles. We don’t always understand the culture but we still latch on to it. Same with Kwezi, we did try to write it clever where we wrote vernac where there is an English sentence and there is a word and in the context you will understand it. I’m from Cape Town so when coloured people in the book talk, it’s like what I hear.

LM: And in the latest episode, he really did that.

CB: In the latest episode, the one line the character says “Wat gaan hier aan?” and I just changed it to the English, “What kind?” When two characters greet each other they go, “aweh”.

LM: It’s almost like an inside joke with South Africans. We know that only South Africans who have walked in our streets will pick it up. It’s a special thing to say I went to Exclusive Books or wherever and next to a Superman comic book was Kwezi. Inside it, there was something that only I would understand. If you speak to Sphe who is playing Kwezi right now, you’ll pick up that energy that careless nature and swag. It’s not just about playing on “Proudly South African”, it’s about being it.

MM: I don’t know who said this but the universal comes from the specific. When you read The Kite Runner, you’ve never experienced the ravages of war but somehow it touches you. If we had tried to do a Clark Kent, there would have been nothing specific and human about it.

LM: One of my inspirations to get this started was District 9. It was huge inspiration because we had never seen aliens in Johannesburg. The first shot is the Johannesburg skyline and over it is hovering this alien spacecraft. The nuances are something only a South African would know to put into that story.

MM: That’s what we call a moment. District 9 was a moment. Kwezi is a moment. Anyone who disagrees with that can meet me outside. Huge events are usually little moments holding hands. I can’t wait to see what and who is bringing the next moment because all the moments give birth to each other in small ways. All we need is moments and sometimes it is a moment of bravery.

Who are your favourite superheroes and why?

MM: Mine is Rorschach from X-Men. I want to be the Rorschach that I want to see in the world. His sense of justice is seen by lots of people as wrong but his one line is, “Never compromise, not even in the face of Armageddon”. He knew he was going to die but didn’t go along with it. I love his sense of justice, the fact that he is out of mind. What does he say in the movie? “You think I’m locked in here with you, you are locked in here with me.” He is insane and I love that.

CB: He think he looks like X24 after he got his haircut. He thinks he’s the black Wolverine.

CB: Mine isn’t that fancy, I like Superman. Growing up I’ve always loved Superman. I like the symbol of justice. I like someone who has got unwavering morals. It’s got a caveat though and it’s twisted. Superman is the most humane of all human beings and he is the most alien. Everything about him is alien but he has appropriated himself to have humanity: when he is Clark Kent, his level of kindness and sensibility to his parents. I don’t think he’s boring.

Final word about being at Comic Con:

LM: We are right where we need to be. It’s the perfect timing. We created the first South African superhero and within that lifetime Comic Con happens. There is something in the water. I can’t explain what it is and why. I can’t explain why Black Panther happened and it’s the biggest thing and it’s related to Kwezi. Something is happening and we will only realise what it is later.

MM: It’s the moment. It’s a big deal because I am a girl from Soweto and who would have imagined that girls from Soweto can write comic books? I mean I am still in shock. This is, wow, what the fuck.

Get yourself a copy of Kwezi online, or at other good bookstores.

Interview edited for clarity and brevity.