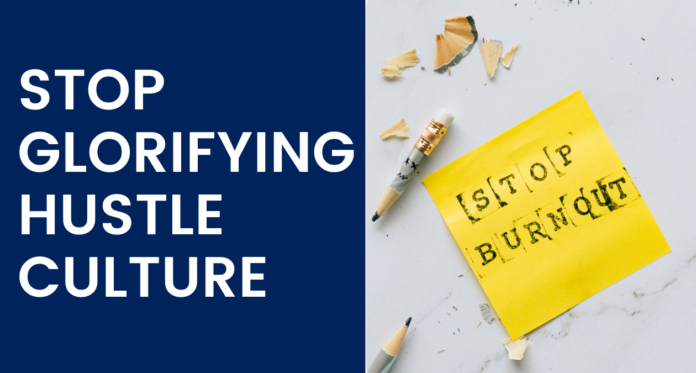 It seems like everyone has a hustle nowadays. Driving for Uber is a hustle. Starting a blog is a hustle. Picking up a side gig (or three) is a hustle. Why TGIF when you can #ThankGodItsMonday? Committed hustlers believe that the most important aspect of life is to achieve professional goals by relentlessly and continuously working hard. Hustle culture says it’s fashionable to work yourself to death — or at least look like you are. And with the economy in shambles and the unemployment rate skyrocketing, there’s added pressure to generate any and all supplemental income. Oh well, hard work has never killed anyone … or has it?

Want to know if you or someone you know is a proponent of hustle culture? Here’s how to spot individuals that celebrate “the hustle” at its most extreme. They:

It’s not just individuals who exemplify this culture. Some companies and organisations pride themselves on all of the above, to prove just how hard they hustle. All the time.

But hustle culture isn’t as great as it’s made out to be. Here are just some of the reasons why:

Burnout is the term given to extreme exhaustion, after the body and mind have been pushed to their limits. Burnout is included in the 11th Revision of the International Classification of Diseases (ICD-11) as an occupational phenomenon. It is not classified as a medical condition.

Burnout is a gradual process. It doesn’t happen overnight; it can creep up on you. The signs and symptoms are subtle at first, but become worse as time goes on.

According to the HelpGuide physical signs and symptoms of burnout include:

Emotional signs and symptoms of burnout include:

Behavioural signs and symptoms of burnout:

This isn’t stress: burnout is a totally different state of mind. Stress can be characterised by doing too much, whereas burnout often leads to not doing enough and feeling emotionally blunted. And, even worse news for the extreme hustlers, it doesn’t make your work any better – quite the opposite, in fact.

It’s not productive at all

Working long hours is detrimental to both productivity and creativity, especially in the long run. Hustle culture promotes accomplishing as many tasks as possible, with little regard to the quality of the work that’s churned out.

So, don’t be fooled by the hashtags and the IG posts: in the long run, there is nothing glamorous about the hustle culture. You shouldn’t need to burn out to convince yourself – and others – that you are working hard. In our next article on the topic, we’ll look at how burnout bites.