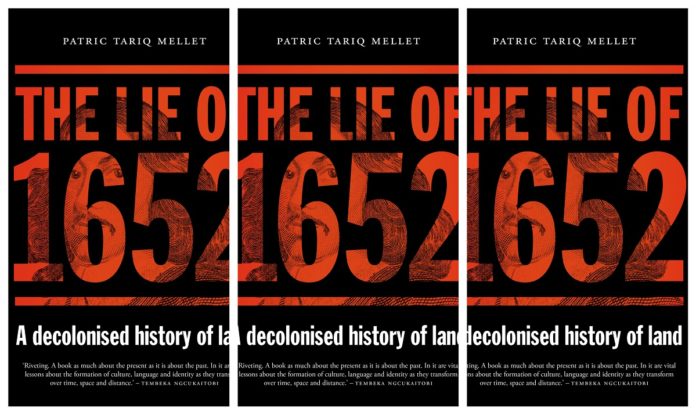 The Lie of 1652 by Patric Tariq Mellet joins a growing list of books retelling the history of South Africa, focusing on the land. In his book, Mellet aims to debunk myths such as “the empty land” and the “Bantu invasion”. More importantly, the book looks at how important the land is for restorative justice and memory.

Over a Zoom call, Mellet said he wanted to disrupt and break paradigms of accepted histories. History forms a huge part of his academic background. Part of the anti-apartheid liberation movement, Mellet went on to the work in the government and non-governmental spaces. He is a heritage activist, storyteller and educator specialising in Cape Slavery studies. The book which took over three years to write is an in-depth look at the land and the loss of it. It was a labour of love, representing his research journey but also his personal journey he said.

“So this book is not trying to tell people what they should believe. It’s about disrupting the paradigm of history. And it’s about encouraging people to go and look beyond the square and see that the history that falls between the cracks is actually much more interesting,” Mellet said. He wanted to interrogate the assumption that all formal history is factual. He examined the need for restoration and recognition of the different identities that make up the people of South Africa and the African continent.

From the money that was used during apartheid to statues that exist around the country, Mellet said a lot of things have been accepted as fact when they are not. With his book, he wanted to look at some of these “key cornerstones of false history or distorted history and to give an alternative.” All of the alternatives he presented in the book are backed up by traditional research methods. This is all done with the main aim to say “there is a different

story to tell you.”

How to read the book

The book is over 300 pages long which can be a daunting length for even a seasoned reader. Added to that is the fact that the book deals with a heavy subject matter. The book has five chapters and Mellet said each chapter can actually be read as stand-alone books. The first chapter of the book looks at Africa: beginnings and challenging narratives while the second chapter is the story of the founding of the port of Cape Town. In chapter three Mellet looks at the wars of land expropriation and resistance. The final two chapters look at Seaborne forced migration and De-Africanisation respectively. It’s the final chapter which is an important one for Mellet.

De-Africanisation and the coloured constructed identity

This book is as much about South Africa and Africa’s history as it is about Mellet’s own history. He said the book has an objective and subjective aim. Just as he tries to retell history and memory, Mellet went on a journey of self-discovery of his family’s roots.

“We can’t separate the national question, the identity question from the land question, nor can we separate both of those from the expropriation of labor, without compensation, which is slavery, indentured, labor, migrant labor. I refer to our history as her story, his story, our story that is the perspective that I come with,” he said.

In recent months, conversations around coloured culture have dominated social media conversations. People have tried to say that coloured culture and by extension coloured people don’t exist. Mellet said people has sought to say coloured people didn’t suffer during apartheid and were actually “junior partners”. He rubbishes these claims in the book. “It is a complete insult to people to be called a non-African minority, or to be called blacks in general, but not

Africans in particular,” he said. Drawing upon his own multicultural background, Mellet uses the term “Camissa” as a better representation of his identity and others.

“It’s not an attempt to re-label apartheid labels. It’s just to show that we have an African heritage and an African consciousness, but we also have a unique Camissa African heritage. What makes this unique is the experiences we went through: the atrocity of slavery, the

atrocity of the colonialism, of genocide of and the de-Africanistion of a policy,” he said.

What makes the book stand out is that Mellet isn’t trying to only retell colonial and apartheid histories. He wants to correct the history coming out of the African National Congress, particularly around the role that coloured people played in the liberation struggle.

To conclude his book, Mellet tackles the subject of decoloniality through the lens of restorative memory and justice. During the interview, Mellet said restorative memory is fundamental to be able to get restorative justice. He said achieving decolonisation means understanding the memories that were lost and obliterated during through colonialism, apartheid and what he calls “necolonialism”.

In order to restore memory and achieve justice, difficult conversations need to be held and interrogated. Through a project Mellet is working on in Cape Town, he is making a civil society contribution to restorative memory.

“So the starting point in decolonisation has in a sense been a conscious deprogramming of ourselves and of way of thinking within our society. Freeing us up to think, and to really have robust discourse where we have to say that there’s something really wrong,” Mellet said.

The book officially launched September 23 via a webinar. Mellet was in conversation with Dr Tshepo Madlingozi. The book is available online and in all good bookstores.