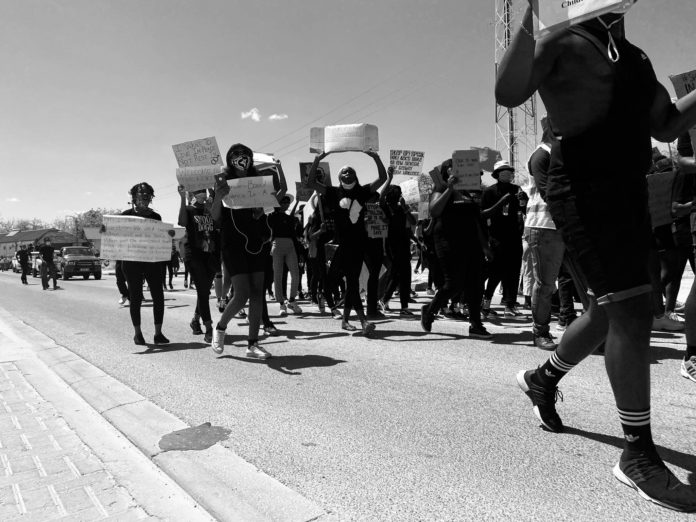 For almost two weeks, Nigerians have been protesting to #EndSARS. Thousands of people joined the demonstrations across the country, raising their voices against police brutality and poor governance. Meanwhile in Namibia, people took to the streets to protest against gender-based violence. They’ve called for #ShutItAllDown and #ShutitAllDownNamibia. Here’s what you need to know about the protests.

Why are people in Nigeria protesting?

[UPDATE] On Tuesday, October 20 Nigerian forces fired on protesters in Lagos. Forces were deployed to the Lekki Toll Gate area where they shot at demonstrators.

Young Nigerians took to the streets in October to protest the police unit known as SARS – the Special Anti-Robbery Squad. The protest began after reports emerged that a man in southern Nigeria was killed during a stop-and-search operation on October 3. The police have said that the SARS officers were not involved.

SARS was created in 1992 and was tasked with tackling violent crime in Lagos. Those who were in the force were afforded the privilege to work under anonymity while travelling in unmarked cars and plain clothes. With the squad expanding throughout the country allegations of corruption and abuse also spread. Nigerians have complained about SARS targeting especially young people for money. Amnesty International has documented at least 82 cases of torture, ill treatment and extra-judicial execution by SARS between January 2017 and May 2020.

What are the broader demands?

Protesters say they won’t be satisfied until the government and the president deals with SARS decisively as well the broader issues related to the police. Amongst their demands are compensation for the victims of police brutality and better pay for police officers to reduce the financial exploitation of citizens. They also want all the people who have been arrested during the protests to be released.

Okay so what’s been happening in Namibia then?

In Namibia, protesters took to the streets against gender-based violence. The protests were sparked by the news that police reportedly found the remains of a young woman in Walvis Bay. The woman had gone missing in April. Bertha Tobias, a young activist and others shut down the streets of Windhoek in protest. Using social media and on the ground protests, the activists and protesters said they would continue protesting until action was taken against gender-based violence and sexual abuse.

What are the demands?

Along with the broader demands for action against GBV, the protesters have called for a state emergency over GBV. They want GBV experts to be consulted in dealing with the problem. They’ve called on the government to prioritise the urgent review of sentencing laws for sex offenders and murderers, among others.

Sister Namibia, a non-profit organisation promoting women’s rights have put together a ten-point plan for the government to implement. Speaking to Al Jazeera, the organisation’s spokesperson Ndapwa Alweendo said: “There’s a culture of silence in place to keep women and children from speaking out. There’s a stigma about coming out as a survivor of any kind of violence. This has been a problem in the country since the fight for independence.”

(Editor’s note: Ndapwa Alweendo is a former employee of The Daily Vox.)

On October 13, the government responded saying they would be strengthening the policies related to GBV in the country.

The government also announced they would be establishing a special court to fight violence against women. Prime Minister Saara Kuugongelwa-Amadhila said: “We share in the repugnance of the Namibian public at the situation of SGBV and are in full agreement with the public that this situation cannot be allowed to continue.”

During the protests, many women were arrested for contravening COVID-19 regulations. Namibia has regulations that limit gatherings to 50 people. The charges were dropped a few days later.

Kaajal Ramjathan-Keogh, director of the International Commission of Jurists – African Region condemned the widespread ill-treatment and arbitrary arrest of peaceful demonstrators. “Instead of taking seriously the demands made by the protestors and to take steps to ensure that gender based violence is addressed in a meaningful and constructive way, the police themselves appeared to have engaged in violent action against those exercising their rights to peaceful assembly and express their view,” said Ramjathan-Keogh.