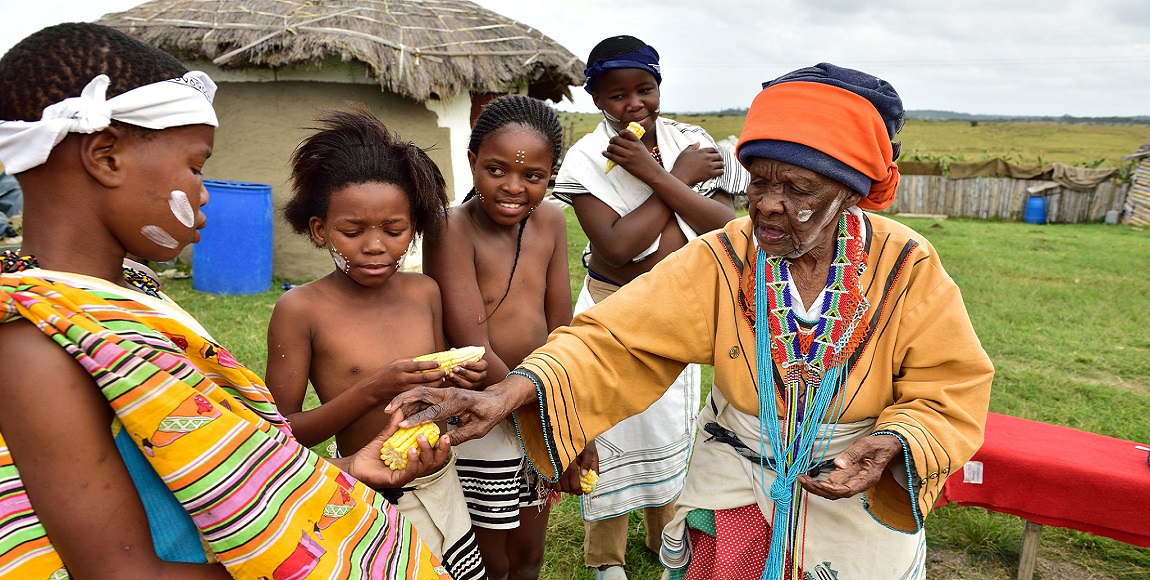 Phumzile Simelane Kalumba first started considering the significance of names when she had to name her own children. She and her husband considered the tradition, meaning, and importance of a name both for the name giver and the name bearer. Kalumba started writing a list of names and their meanings when she was expecting her firstborn in Uganda. That list of names evolved into her book called Jabulani Means Rejoice: a dictionary of hundreds of African names in local South African languages, carefully collected, curated and explained for the reader. Each name is listed in alphabetical order, with gender indications, and information about their ethnographic origins and meanings. We spoke to Kalumba about her book and the naming traditions of South Africa. Names are part of the indigenous knowledge. When I was naming my children there was no dictionary of names available, and this served as inspiration for me to add to the body of knowledge. Because this project was completed outside of South Africa when I lived abroad, I had to give up all I had from the insides of me to begin writing the list of names. When I realised this project was actually something, and I had exhausted myself, I consulted other containers of memory like the elders. When we lived in the United Kingdom we befriended a couple living in exile. The man, who is now late, taught me about Xhosa names because I speak Zulu and Swati. He gave me a deeper meaning of some Xhosa names. I also used a database of names in South African schools.

The names in the book are everything that was available to me at that time. I missed out the names that came after democracy because of how the research was done. Those names were another kind that came with freedom.

Names are not static, they are like a language. The context of a name is as important as the meaning of the name. It adds another layer of meaning. The more you move with time, the more the meaning of a name changes. Even the weight of the meaning we place on names changes. But it’s interesting how different people place different values on names. If you look at the Eurocentric view the name is just a label, something you are called by.

When we are talking about South African names – of the Bantu languages of South Africa – we must consider oral literature. Before, there was nothing written down. The most important documents like wills were passed down orally. Today our most important documents: birth certificates, IDs are contained in written documents. In the oral culture, everything must be passed down from generation to generation through narrative: songs, praise poems, stories. It doesn’t mean because there was no paper these things were not there, they were there.

The name is part of that important package of history: values held in high regard by society, belief systems and families. That’s how significant names were then. When you’re called you heard the family you are coming from, the hopes, the beliefs, the values the name giver held in high regard. Sometimes you’re even reprimanded using your name: reminding you that your name encapsulates something that you must be able to live up to, your name has an influence on who you become.

From prophets to profit: The colonisation of African spirituality

Today the name bearer has taken back all of the power to say this is the name I want for myself, this is the identity I want. The name bearer reinvents their identity through platforms like social media. Social media has also influenced how people want to be called: these days people don’t want these very African names which makes you less relevant on the global stage. Names like Noxolo or Thanduxolo become Noxy.

There is also a masculine and feminine expectation in names. It instils certain values. Once you have a certain name that is masculine, it can shape you in a certain way. You have to portray that masculinity. If you are given a name that is softer, it shapes you in that way. We must look at this in relation to the times we are living in. We come from a patriarchal society so there is an expectation for men to be stronger, to be providers and look after the home. That’s how society was structured. Certain roles were given to certain people.

Today we clash with the Western worldview. We should not think ‘this is barbaric’ and ‘this is modern’ instead of understanding each worldview and where we agree and where we differ. In traditional societies there were roles women played that men could not play. That is how we had masculine and feminine names. Nowadays there are unisex names. A feminine prefix like No- is added to the name which is the stem. A name like Mandla would would become Nomandla.

Modernity, spirituality and tradition: My ancestors are my force of belief

The names will change to reflect our societal values. Names are socially constituted and context-related. Once the social setting changes, the significance of the name also changes. We should not lose the history while our names reflect the now. If no one takes time to document the names, the narratives and the people then we’ve lost more than we have gained.

Jabulani Means Rejoice is published by Modjaji and distributed by Protea. The book is widely available at all major bookstores and from the Modjaji website.