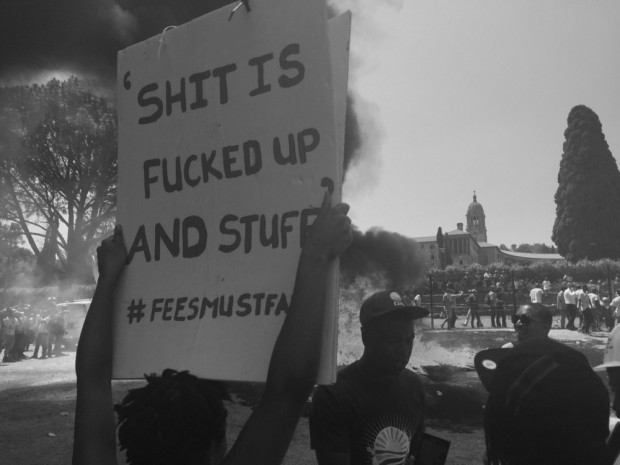 A picture may say a thousand words and a well-worded placard tells a million woes. FIRDAUS KHANÂ rounds upÂ some of the most evocative placards of the protest.

1. This one stands in honour of Wits’s incoming and outgoing SRC presidents, Nompendulo MkatshwaÂ andÂ Shaeera Kalla, and the drones of oestrogen-filled superhumans largely credited with starting and maintaining the momentum of the movement. 2. A clever play on pop-culture. It might be a Hard-Knock Life now, but without doubt, students Run This Town. 3. In memory of a rainbow nation that never existed. 5. And his reputation for being a heavy drinker also did not go unremarked. 6. Let’s not forget it wasn’t just about fee increases. Â  7.Â There certainly wasn’t much trust in the SAPS.Â 8. Alas, where is the government of the people, the housing and education you promised, ANC?Â Â  9. A miscarriage of justice? 12. And then there’s this one, “The University of Whites with Rands”