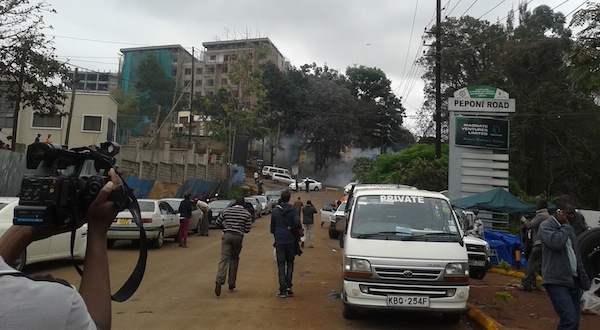 It was Saturday, 21 September 2013, and I had just finished presenting the midday bulletin at our Nairobi studios when I read the first tweets about an apparent armed robbery taking place at Westgate shopping mall, across town.

Within an hour, the words â€œattackâ€, â€œgunfireâ€ and â€œterroristsâ€ began to feature across social media, , the best source of information at that point on what would turn out to be the deadliest terror attack on Kenyan soil since the US Embassy was bombed 15 years earlier.

By 3pm I watched on television as men, women and children,Â many of them wounded, escaped aÂ SaturdayÂ afternoon outing at a mall with their lives, as gunmen kept dozens others hostage inside.

Later that afternoon, I attended a press conference called by the countryâ€™s interior ministry. Both local and foreign journalists in attendance were hoping for the first comprehensive explanation of what was happening inside Westgate.

While we got confirmation that it was indeed a terror attack, very little other information was given,Â except to say that authorities were responding. Getting a clearer picture throughout the next four days proved to be a battle, with officials often evading the press. Official briefings were limited, and gave very little detail. ByÂ SaturdayÂ evening, I watched again on television as a man, distress and fear etched on his face spoke to a local journalist. His wife and child were still in the mall, seven hours after the siege began. While he spoke of his determination to get into the mall to save them, the despair andÂ resignation in his eyes betrayed his words. Like many across Nairobi, he would simply have to wait and hope his loved ones were still alive.

Militant group al Shabaab had by now claimed responsibility for the attack, which it said was in retaliation for Kenyan troops fighting them in Somalia. Authorities said there were up to 12 heavily armed attackers in the mall. It later emerged that there were only four.

I remember sending updates to my own relatives in South Africa, reassuring them I was safe. The response I received repeatedly was disbelief that the siege was far from over.

I donâ€™t think anyone realised the magnitude and implications of such an attack â€“ or just how long it would continue.

Day two, and I had been assigned to live crossings from outside the mall. By now the huge number of media had been moved a few hundred metres away from the shopping centre, to the main road overlooking the scene. Gunfire and explosions continued.

I also reported from a nearby hospital, MP Shah, where many of the injured, suffering gun and shrapnel wounds, as well as the dead, were taken. Up to fifteen bodies remained unclaimed, their families either unaware or themselves perhaps still in the mall.

For the next 36 hours, we watched and waited. We spoke with government officials, security experts and analysts. All manner of theories were thrown around about what should be done next to rescue those still trapped inside. We updated the public on what little we knew and tried to piece together a story that would provide some sort of explanation to those still in shock. As armoured personnel carriers moved in and out of the vicinity, curious bystanders were dispersed with tear gas and volunteers dished out coffee and food to journalists outside the mall.

As journalists now had increasing accessÂ to those who had managed to escape the carnage, we heard stories of fear, heroism and sacrifice.

It emerged that as patrons had lunched and shopped, the attackers had stormed the mall, firing at anyone and anything that stood in their way. There were testimonies of Muslims being killed and Muslims being spared. There was confusion and anger. There were also rumours and speculation around the killers in the mall, including that wanted British terror suspect, Samantha Lewthwaite, also known as the White Widow, was among them. ByÂ MondayÂ evening, when Kenyan President Uhurru Kenyatta declared the siege over, we continued to hear explosions and gunfire coming from the vicinity of the mall. We were told security forces were conducting a final sweep of the building. Conflicting information on the number of people still inside the smouldering building and those rescued remained a frustration for those looking for missing loved ones and journalists trying to disseminate accurate information.

But what was certain by the end of that week, is that a nation grieved for 63 lives lost. The gunmen were also killed.

In the months that followed, the country’s level of security and vulnerability to terror attacks continued to come under scrutiny, especially as smaller scale attacks still went on, leading to a security clampdown and the targeting of ethnic Somalis.

According to the US Pentagon, the man thought to be responsible for masterminding the attack along with the leader of al Shabaab, Ahmed Abdi Godane, was killed in a US drone strike just two weeks ago.

I wonder what this has done to reassure Kenyans of their safety. While they prepare to commemorate the lives lost a year ago, they also face renewed warnings of yet another Al- Shabaab attack in retaliation for the killing of Godane.

What has stayed with me over the past year is not only the loss of life,Â the senselessnessÂ and theÂ intensity of the Westgate attack, but also the haziness around a devastating incident that’s left a nation unsure of itsÂ safety and less trusting of those meant to protect it. Fahmida Miller is a South African journalist and news anchor based in Nairobi, Kenya. She was most recently part of international broadcaster China Central Televisionâ€™s team covering the death of Nelson Mandela and South Africaâ€™s 2014 elections. Follow her on Twitter.