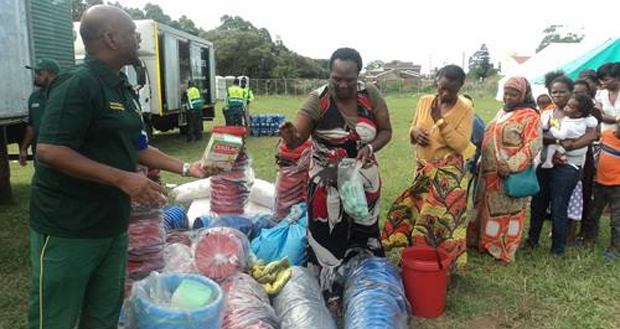 Xenophobic attacks in KwaZulu-Natal has left thousands of foreign nationals displaced and several people dead. Many have lost their livelihoods and are fearing for their lives. Here are three ways you can help, beyond social media hashtags (although for the record, the hashtag is #SayNoToXenophobia).

1. Join volunteer efforts in Durban
Aid organisation Gift of the Givers has been on the ground in Durban to help evacuate foreign nationals to safety, as posted on the organisation’s Facebook wall.

“We are fetching people as we speak,” Dr Abdirisack Hashi, who works with the organisation, told News24 on Tuesday. “We are trying to rescue some families who say they are stuck in a house.”

About 7,000 people from various African nations were reportedly living in the tents at campsites built by the provincial government. According to Hashi, evacuees are in need of safe accommodation and prepared food.

You can volunteer to help the relief effort with Gift of the Givers or send donations.

2. Donate to Red Cross
The South African Red Cross Society has been delivering hot meals to victims of xenophobia but the work is far from over.

“As the xenophobic attacks and the numbers of the vulnerable are increasing by the hour, we are still in dire need of non-perishable food items, bread, soup, disposable diapers, baby formula, hygiene packs, sanitary pads and porridge,” SARCS said on Facebook.

Donations can be delivered to the Red Cross provincial office branch at 201 Kenneth Kaunda Drive, Durban North. You can also contact Deshika Daya or Zukiswa Dzatsima on 031 563 2914 or via email for more information.

3. Join the Durban Peace March
Leaders in Durban have organised a peace march to show solidarity with foreign nationals against xenophobia. KwaZulu-Natal premier Senzo Mchunu and eTwekwini mayor James Nxumalo will lead marchers from Curries Fountain stadium to the city hall. The march starts at 10am.

“The latest acts of violence are shaming our province and tarnishing our international standing,” Mchunu said. “Let it be known to all of us that without the solidarity of the African continent and its people we would not have been able to achieve the freedom we enjoy today.”

Popular columnists Khaya Dlanga and Shaka Sisulu have mobilised a Peace Bus which will transport people from Johannesburg who wish to join the march to Durban. Follow @shakasisulu and @khayadlanga for updates.

Jozi Stand up! Get on the Peace Bus tonight! pic.twitter.com/RbTtF1zCyv

Editor’s note: If you’re on the ground in Durban and are aware of any other relief efforts, please drop us a line with the relevant details, and we’ll update this article.

– Featured image: By Gift of the Givers via Facebook.