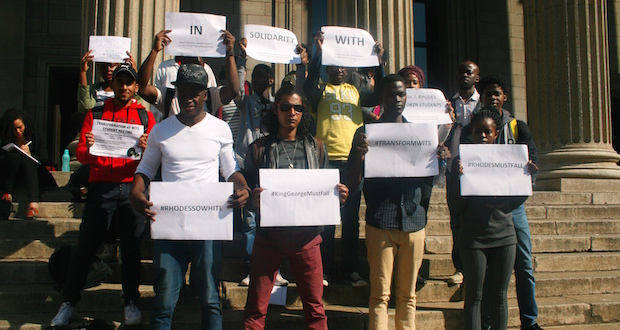 1. More black academic staff
Simamkele Dlakavu, the facilitator and one of the organising students, shared some of the statistics on the racial makeup of Wits staff. According to Dlakavu, 55% of Wits academics are white, 10% are black African, 3% are coloured and 24% are non-South African. Most students were shocked by these statistics.

â€œI knew it was bad, but I didnâ€™t think it was this bad,â€ said one student. The students have previously requested the politics department employ a black female lecturer, but they have not yet succeeded.

Last year, it was reported that one in tenÂ professors at South African universities is black, with black female academics the most poorly represented.

2. A more Afrocentric curriculum
A number of students expressed their concern over the lack of African philosophy, history and theory within their curriculums. A final-year law student complained about the fact that some of their prescribed cases are only available in Afrikaans. â€œI donâ€™t understand why there are no translations available or why donâ€™t they prescribe other cases?â€ she asked.

A recently appointed lecturer in the philosophy department said it would be hard to charge the syllabus into a more Afrocentric one. â€œI have made a few changes to the syllabus, but this requires a greater systematic change. Thereâ€™s only so much a lecturer can do,â€ she added.

4. University support for poor students
A number of students raised their concerns over the visible racial and divisions that are present at the university. â€œWits is very quick to let of go of students â€“ be it [by] financial or academic exclusion,â€ said Nonkululeko Mntambo, a politics, philosophy and economics student. Mntambo said not enough was being done to support poor students, who were the students that most need support.

Wits University students have joined in on the call to transform academic institutions. In the #TransformWits meeting yesterday, organised by the university’s Politics post graduate students, Nonkululeko Mntambo expressed her concern about the lack of support for poor students.

Earlier this year, there was a funding crisis at Wits when the National Student Financial Aid Scheme (NSFAS) had a shortage of funds, leaving many students at the risk of financial exclusion.

5. Broader transformation
While many of the issues that were dealt with were student-related matters, it was made clear that transformation is not limited to the studentsâ€™ agenda alone. Thembi Luckett, a student and member of the Wits Workers Solidarity Committee, said workers at Wits had supported students during the NSFAS crisis and that students should also support them through their challenges.

According to Richard Ndebele, a worker with one of the companies contracted by Wits, some contract workers have not been paid in three weeks. â€œWe have reported to the Wits management that we havenâ€™t been paid. They said they are still in the process of sorting it out but nothing has happened,â€ Ndebele said.

At the end of the discussion, students asked what the next step should be.

â€œWe must actualise everything that was said here. Talking will not solve anything,â€ said Enhle Khumalo.

The meeting ended with a mini march to the stairs of Great Hall, where students demonstrated solidarity with the other transformation protests and campaigns currently taking place at the UCT, Rhodes and UKZN.