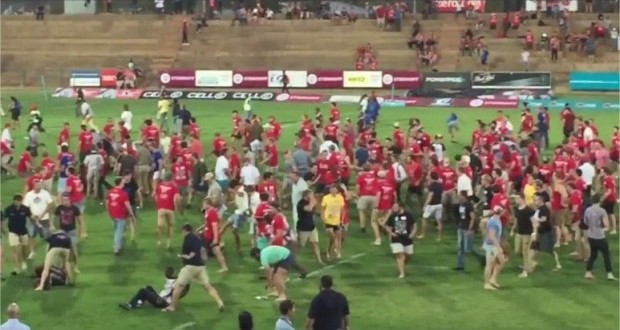 Protests against outsourced workers hit the University of Free State on Monday night when protestors disrupted a rugby match on the campus. Things quickly turned violent as spectators tried to stop the protest, and police were called in to restore calm. *GUGU NDLOVU, a student who was involved in the protest and got injured in the commotion told The Daily Vox what she witnessed.

Oh wow, what happened at the game – the tension didn’t end there. It was just the beginning. But what happened there… we were outside the game. The intention was to go to the game because we knew Professor Jansen was there and we trying to get his attention. Because on the other occasions when we tried to get a hold of him, he told the SRC president that he didn’t have time to work with the workers’ complaints. He dismissed it. So our intention of going to the game was to get his attention so that he can address us.

And, contrary to what everyone else is saying, we didn’t disrupt the game while it was on. We went onto the field during halftime and we formed a circle. We were singing and then a few white students came off the grandstands and came to the protestors and started antagonising them. There’s even a video that shows it was the white students. And then when Bongani Mazola tried to stop them; he was stopping the fight, that’s when we saw people from the grandstand going into the field. And then they just started hitting everyone. There were five-six people to one black person. And in the crowd when we were watching the videos that people were taking from the crowd, we could hear people cheering them.

The thing is, they were able to get off the field, we were on the other side, standing with the SAPS me and my cousin. And we could hear the captain give the order to let them go inside the stadium. “When they inside we can close them in. And shoot them. Shoot at will.”

We were listening; we were standing there. I heard this myself from the captain. One of the policemen asked him, “but we only have our handguns, we don’t have our shotguns”, meaning the ones with rubber bullets. And he said “No I just called and it’s at the main gate and the shotguns are coming”. And they retreated. There was commotion even before this but they retreated and then the shotguns came. They got ready.

And when the protestors were beaten, we saw them [the police] coming from the back. The police were actually going inside to go shoot them. But I don’t know by fate or by God. I wouldn’t really call it a blessing but I’m glad it happened when it happened because if it hadn’t happened, the cops would’ve shot them down. While we were standing there, we took our phones and said we were going to record everything. To bring a case against the SAPS. And that’s when they left us outside. So when we gathered again, we gathered back at the SRC building.

We went to the SRC building who were attending to their wounds and stuff. Those that got badly hurt and the rest of the group was outside singing outside the students’ entrance. And then one of my housemates was walking back to our commune – we live off-campus. She came running back to the SRC building and she told us that a van with white students was beating up a girl. They had gotten off their van and had baseball bats and guns and stuff. They were beating this girl up. So that’s when everyone from the SRC building ran to where the commotion was happening and that’s how everyone ended up outside Vishuis, that’s the res that’s apparently burning. When we arrived outside Vishuis it was only campus security, the police hadn’t still arrived.

We were mad at the security so the rest of us were trying to calm the angry protestors. They were angry with security because they were like, “Why didn’t you help us when we were being attacked and everything?” And we calmed them down but while we were trying to calm the situation down, the white students that live in Vishuis were standing outside their windows, calling us kaffirs and throwing eggs at us and what not – From their res windows. Then we asked the security, “Why are you not going into their res to reprimand these students?”. We’re not at fault, we’re just protesting and now at this point, we weren’t even protesting. We were just sitting outside Vishuis singing, just scattered around. Because it wasn’t safe for any of us to go home. Because we were getting calls from our friends that live on the other side of campus who are saying, “Hey these white people are driving around campus, beating people up.”

There was a time when we were sitting outside Vishuis and the white students started gathering across the street from us and we could hear them calling their friends and saying, “Ja we outside Vishuis come here,” and then when there was a biggish number maybe 30-40 of them they were standing there with the police. One of them threw a rock in the direction of the protestors because we were sitting there singing. We had ignored them. We thought because the cops were here they wouldn’t try anything. One white student threw a rock and then a protestor retaliated and then everyone was throwing rocks at each other – the white students and the black students. So when one of these white kids picked up a rock and threw it in my direction and it hit me. It was a fairly big rock. I’m still in pain now.

Then we got a call that they were at Tswelopele House, one of the predominantly black residences of campus, and we were told that the white students were going there to beat up students. We went there and the situation was calm, so we came back. And then suddenly there was a hit list. These white students were looking for the SRC president but fortunately, they went to look for him at the res he previously lived at, and they didn’t find him. They couldn’t get into the res because you need a student card to be registered in that res to get in. They used their rifles to shoot at the window and whatnot. The windows are damaged.

When we went back to Vishuis, some of the protestors were there. We just felt it was safer to be in numbers and when we got there, the riot police were there and we asked them, “What are you doing here, not roaming the campus looking for these kids in these vans with their guns?” So when we went to the other classes trying to use the bathrooms and stuff, another car went by, they were swearing at us and told us they were going to kill us. They said the police aren’t going to help us because they’re going to leave and we’ll just be left with them on campus and they going to start killing us and whatnot. Then we went back to the police and told them this is what they’re saying, and he did nothing about it. And one of the policemen said told me to go to sleep because I got hurt. And I said, “How do I go to sleep when I’m afraid I’m going to be victimised?”

Then I left. One of my housemates came to pick me up with a cab. I got back to my place and I called my cousin. Apparently when we just left all the commotion got out of hand and the cops started shooting at the protestors. Well, apparently the cops went in the direction of the white people and they thought they going to reprimand them and tell them to stop throwing rocks, but then they turned around and started shooting at the protestors still outside Vishuis. So when they ran away, the white kids were hiding in bushes and shooting with their rifles. It was around midnight. The white kids were using live ammunition. We picked up bullets even. They were big from a rifle, not a handgun. And then they were running and they ran to the SRC building and my cousin got hurt. He was shot with a rubber bullet, but he’s fine now. He’s going back to campus right now. Some girl was apparently hit and she was bleeding. She only noticed when she got to the SRC building. We still don’t know if anyone was killed. A few people were missing but we found them this morning on campus and they’re fine.

As told to The Daily Vox, edited for brevity and clarity.