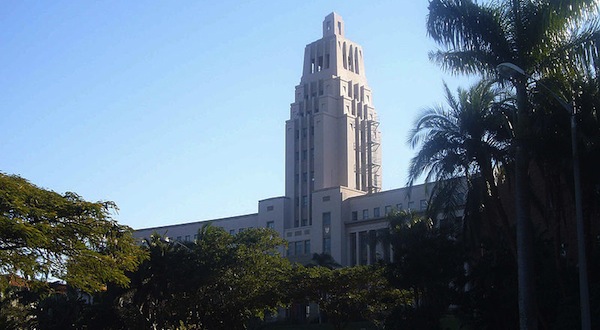 The University of KwaZulu-Natal recently announced Dr Albert Van Jaarsveld, CEO of the National Research Foundation, as its new vice chancellor and principal. SHIMEI GANESH spoke to stakeholders at UKZN about his appointment. Â Anonymous, early 50s, senior academic, Durban
We know that Van Jaarsveld is head of the National Research Foundation. We can speculate, with confidence, that itâ€™s his financial skills that are very important. Itâ€™s now understood that the university is in about R800-million in debt. Staff morale is on an all-time low as a consequence of the financial crisis. Departments like our own couldnâ€™t even offer their full undergraduate programmes. Clearly this guy – a very competent person with a good record from a technocratic point of view – will be able to sort out these problems. Weâ€™re really putting a lot of hope in him to sort out the financial mess, so that the universityâ€™s academic culture can blossom again. (Image via Wikimedia Commons) Talia Maria Stefanidis, 21, undergraduate student, Durban
To be honest, I didn’t predict his appointment. I assumed the deputy vice chancellor, John Mubangizi, would take the post. I guess the university wants transformation, and that is what Van Jaarsveld is able to offer.Â  According to a few articles that I read, he believes in excellence through transformation, that the staff are the universityâ€™s most important assets and should be more student orientated. He also emphasized the importance of increased accountability within the staff and management in UKZN, which I think is a step in the right direction. I believe in Van Jaarsveldâ€™s philosophy, and I hope that he brings the positive change that is needed to improve and uplift so we may produce excellent students. Bhekumuzi Howard Maphumulo, 23, honours student, Durban
The past two years weâ€™ve been going through a downfall of strikes and studentsâ€™ unhappiness. Change is long overdue. Vice chancellors are bound to focus on fields of study that they have experience in. Van Jaarsveld is the CEO of the National Research Foundation, so maybe thatâ€™s good because he deals with research all around. Maybe he will level the fields for the whole university. Looking at how the university student body have been hostile to a black vice-chancellor, I wonder how hostile theyâ€™ll be to a white man. Student fees are going to be raised by 100% so I wonder how he will respond to their protests. Tunga Kujinga, 24, masterâ€™s student, Sydenham
Iâ€™m a Zimbabwean student who came to this university purely because itâ€™s an African scholarship that gives us the opportunity to do research. With our new vice chancellor coming from a strong research background, we feel euphoric because it gives hope to anyone in this university who takes research seriously. Transformation will happen. Itâ€™s time that we move away from race and look at what theyâ€™re able to do – in this case, Van Jaarsveld giving UKZN the edge to be one of the top research institutions in Africa. What more should we look at? Anonymous, 39, lecturer, Umhlanga
Going about the transformation agenda in a very nasty way creates a lot of angst in the university â€“ thereâ€™s extreme unhappiness as far as the staff are concerned. People were praying for Van Jaarsveldâ€™s expertise to turn this around. When his appointment did happen, people couldnâ€™t believe it. Thereâ€™s such tremendous hope that heâ€™s going to address the transformation agenda in a less autocratic way. Heâ€™s been saying all the right things in the media, which is why he is very popular. His appointment has been embraced by people across all races in the university. Everyoneâ€™s hope is that Van Jaarsveld will bring the teaching agenda back to the table. (Image via Wikimedia Commons)

* Vox pops are edited for brevity and clarity.