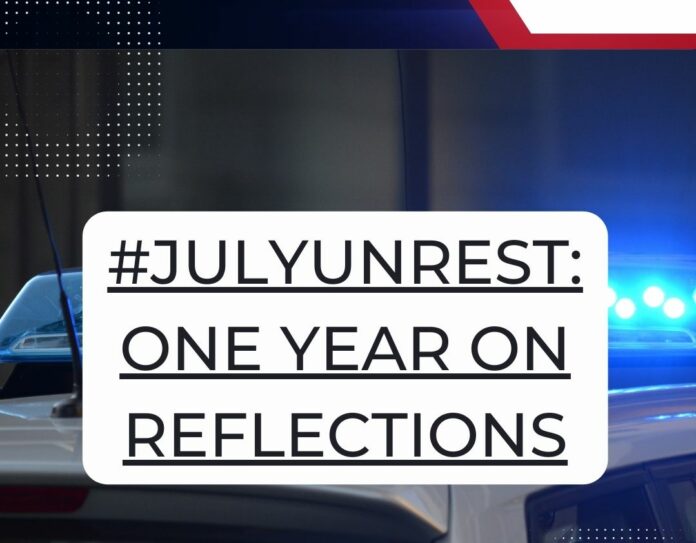 July 2022 marks a year since the 2021 July Unrest. It was a time of intense unrest, and violence sparked by many different factors. A year later, many of the communities who were worst affected are still reeling from the effects including the loss of lives, livelihoods and properties. The Daily Vox team asked some South Africans about their thoughts on the unrest – a year later.

I remember coming back home to Johannesburg and the day after being called into my parents room to watch the news. I was shocked when I woke up and the country was in uproar, watching buildings being burnt and looting of stores in KZN and Gauteng.

I felt scared. I was scared for our economy to further plummet as businesses were burning or closed for safety. Trucks were being stopped so there was no way of bringing resources in and out. I was scared we would have food shortages just like the rest of the country. But as much as I was afraid, I thought about how this was a long time coming because South African citizens had been talking about the unemployment situation especially with the hit of Covid. Jacob Zuma was also imprisoned and that angered his supporters.

It’s really hard to say because a year later and more protests are brewing because we are still unhappy with the state of our country. Children are dying in taverns, loadshedding is never ending and unemployment has increased. There’s so much more that is not being effectively dealt with by the government. I suspect we are going to be in the same place in the near future.

I honestly hope we start implementing solutions from the roots of our problems so that we have a stable, growing country for our children to inherit. To see the youth employed, load shedding something of the past, a better education system for public schools and the government in charge to truly have the citizens in mind in every decision they make. These are a few things I hope to see in my lifetime.

I can still remember the panic, the anxiety and the gunshots as if it was yesterday. My anxiety sure did peak, and I didn’t feel safe at all. I feared for my life not only from the looter but also from the vigilante groups that had started to harass people who they felt didn’t fit the profile of people who should live in their areas.

I got to a point where I muted anything that would trigger me whether it was social media posts or groups sharing safety messages. It was just too much. I drive through the area that was affected the most to and from work and there isn’t a security around – it was like a blimp people have forgotten all about it – back to work like nothing ever happened. I hope that the leaders of South Africa will finally put its people first and be prepared for such things, some sort of disaster management.

My name is Celine Masheleni. I’m a 26 year old entrepreneur from Zimbabwe. I think for me and many others like me; the recent events in the last 2 years – namely covid 19 pandemic and overall political unrest in much of our society has been a huge point of concern. It’s about how we participate in not only rebuilding but also propelling our economies further. Admittedly many people took a hit due to the lock downs and impacts of covid. Unemployment rates rose, socio-economic inequalities and vulnerabilities were exacerbated.

The cost of living continues to rise. It can be a very discouraging outlook for those of us who are building to partake in economic activity as founders, small business owners. We have to be very measured in our approach. But I would like to remain confident in the resilience of the African people. This can be an opportune time for us to come together for the betterment of our communities.

When the riots struck last year and everything spiralled I feared many would not recover. It’s a year later and I see entrepreneurs are trying to pick up the pieces. You can certainly see it’s tough for some to get back up. Seeing the news about how South Africa was on the brink of a collapse was terrifying because this is the country most Africans wish to do business in. I am glad things are slowly coming back to normal. May we never go back there.

My name is Gaisang Sathekge. I am 38 years old and I am a curator at a museum. I would say that in the past few years – I have been able to put money aside in my savings and not even touch it. Recently I found myself having to dig into my savings. Almost every week I need to dig into my savings so that I can be able to cover my living expenses. So things are really bad and the cost of living is really high and it exceeds what one earns.

Geez it’s crazy that it has been a year since that wild time. I remember driving from work and people literally running out of stores with packs of tomato sauce. Imagine tomato sauce? I think that was a long time coming. Those riots were atop many grievances that were not addressed. It’s a pity because I fear we might experience the same thing. When you are in the township, hearing stuff like that you know it’s only about time people act on it.

The unrest last year made me realise that South Africans are a ticking bomb. They are always ready to show their anger in the most violent of ways. I mean it was unnecessary to break stuff and vandalise the way they did last year- but it happened. Who is to say it won’t happen again – especially now with the cost of living going up everyday. We are definitely going back there. Maybe even worse. We were going through riots last year. It’s a bad economy this year. Things are still the same.

The voxes have been edited for clarity and brevity.