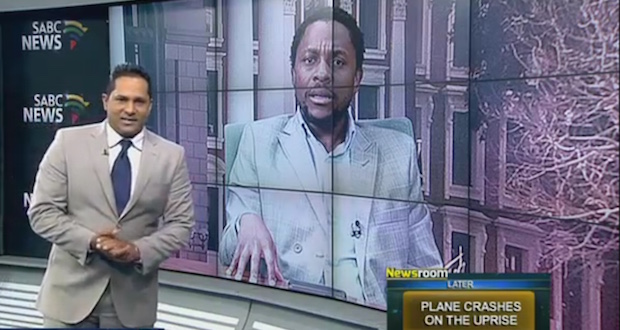 A video of SABC Newsroom anchor Eben Jansen getting hot under the collar while discussing the #RhodesMustFall debate and then angrily dismissing his guest, EFF spokesperson Mbuyiseni Ndlozi, has gone viral. AAISHA DADI PATEL rounds up the absurdity.Â

Jansen asked Ndlozi to confirm whether the EFF was really, as has been claimed, behind the destruction of multiple monuments in the wake of the #RhodesMustFall saga.

As the interview began, Fighter Ndlozi kept his cool and prefaced his reply by saying that he was â€œtrying to demonstrate the intellectual bankruptcy of [Jansen’s] questionâ€.

And a few minutes later, when it became a discussion about Apartheid, Jansen lost it.

Why was Eben Jansen screaming at @MbuyiseniNdlozi on the SABC news channel about the statues? That seemed rather unprofessional â€” Ranjeni Munusamy (@RanjeniM) April 9, 2015

The EFF tweeted that the SABC had promised to take disciplinary action against Jansen.

For now though, many South Africans are left wondering whether to laugh or cry over the news anchor who lost his cool in a discussion with a calm and collected EFF fighter.