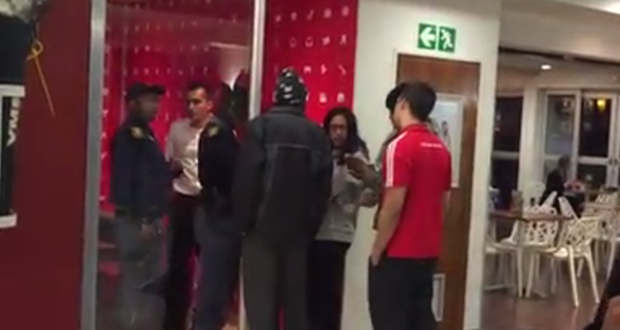 So Virgin Active finally apologised. After flying a team of senior management up to Johannesburg to meet Muhammed Desai, the health club admitted late on Friday that they had indeed erred in the way they handled an incident at its club in Houghton. Desai was booted out of the Old Eds Club for wearing a pro-Palestinian t-shirt on Wednesday night. Staff at the branch had asked him to leave because his t-shirt offended other members. The outrage at Virgin Active may have inspired a sensible response at last (they keep saying they havenâ€™t had to deal with something like this before), but the incident still has us reeling over a series of unanswered questions.

1. Is there is a coterie of people who wield considerable influence over the way some corporates operate?

â€œThe T-shirt worn by Mr Desai generated strong complaints from fellow members at the Old Eds club and he was politely requested by management not to wear it in future.â€

This group of people have been able to persuade the management of an independent corporate organisation to bend the rules to suit its sartorial preferences in other people. So as well as telling Virgin Active how to manage their clubs, this group also decides which people are allowed admission to certain spaces, and also determine behaviour in such spaces.

When the Daily Vox spoke to Desai on Thursday he said another gym member had told him, â€œThey’ve been guaranteed by the highest levels of the company that BDS t-shirts won’t be allowed to be worn in the gym.â€

Itâ€™s actually not unusual. You know how it goes: real estate agents who ensure that only people of a certain race buy property in certain suburbs; companies who make sure that come hell or high water (i.e. affirmative action), white folk still have the networks to get that interview (and land that job) in the private sector.

So letâ€™s emphasise what happened at Old Eds this week: Complaints from fellow members over a t-shirt prompted management to ask Desai not to wear the t-shirt again, or face expulsion from the gym. Thatâ€™s some clout.

Privilege: When one person’a outrage is more important than another’s … http://t.co/fg8cqJy2K4

If you watch the clip with Howard (radio name ‘Hilton’) in it, it is CLEAR that the guy has a sense of entitlement, as if the gym is home. â€” Eusebius McKaiser (@Eusebius) August 13, 2015

2. Was it happenstance? Was it orchestrated? Does it matter if it was a stunt?
According to eNCA journalist Yusuf Omar, who happened to be at Old Eds on Wednesday night (he was fresh off the treadmill when he noticed a commotion), Desai was dressed in jeans and the now (in)famous BDS t-shirt. Many have speculated that Desai went to the gym with the sole purpose of having a confrontation with the club management. Desai confirmed that he had earlier received a call from Virgin Active asking him not to wear BDS apparel to gym. Desaiâ€™s intentions have since been widely questioned. Even Omar, who says he had never met Muhammed Desai before the night of the incident, canâ€™t be sure that Desai actually went to the gym with the intention to train.

But Desai could as well have been wearing a pink tutu because thatâ€™s all besides the point.

Virgin Active refused admission to a member of their Old Eds club on the basis that his t-shirt offends the sensibilities of influential members of the club. It doesnâ€™t matter if Desai went to to the club to train or not. It doesnâ€™t even matter if a journalist was informed of possible action in advance. What matters is that in the face of pressure from an an influential group of people, Virgin Active showed little commitment to protecting the basic human rights of all its members.

3. Sure, thereâ€™s the sticky issue of freedom of expression here, but is it racist?
Howard â€œHiltonâ€ Hersh, a member of the Old Eds club, who can be seen vocally advocating for Desaiâ€™s removal from the club in Yusuf Omarâ€™s video told Redi Tlhabi that “pro-Palestinian” attire at a gym he claims is “very predominantly Jewish” is inappropriate. According to him, he had also previously confronted another gym-goer, giving him the option to either remove the offending piece of clothing, or be involved in a “bloodbath”. Listen to the podcast here.

4. Is Virgin Active a breeding ground for a peculiar species of South African crazies?

The original statement in response to the Old Eds incident was vague, contradictory and disappointing. Virgin Active showed that when they think the safety of one of their members is in danger at one ofÂ their clubs, they will not act against that danger. Instead, theyâ€™ll ask the person whose safety is compromised to try not to offend those threatening them with grievous bodily harm. Jacques Rousseau from the University of Cape Town, has written a comprehensive take-down of the original statement released by Virgin Active in response to the incident. Of course this isnâ€™t the first time Virgin Active has been at the centre of a controversy. And it is not the first time the gym chainâ€™s response to the controversy has been cause of another controversy altogether.

But guys, why is #VirginActive always the place racist reprobates go to exercise? Every other week some angry white dude is exploding there. â€” RuthFirstSisonke2nd (@Sisonkemsimang) August 13, 2015

In response to Virgin Activeâ€™s previous handling of a racist incident, Victor Dlamini tweeted: â€œTruly disgraceful handling of racist bully by Virgin Active SAâ€, while Zama NdlovuÂ said: â€œVirgin Active deals with racist patrons by asking them to apologise, as though an apology will fix racism. This whole country is not seriousâ€.

5. So, what happens now?
Desai has already lodged a complaint against Virgin Active at the South African Human Rights Commission. But Virgin have now said sorry,Â so everybody and their dumbbells should live happily ever after – until the next time someone at a Virgin Active club doesnâ€™t like the way someone smells. In the meanwhile, find out where Yusuf Omar is training, the next big story will be on his trail.

– Featured image: screenshot from the video