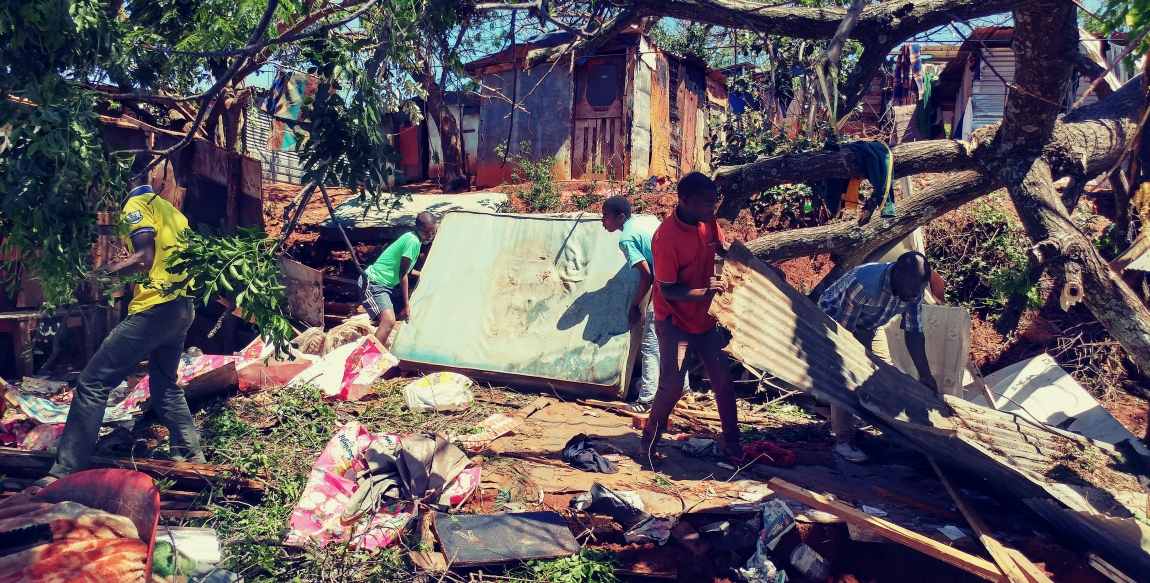 On Tuesday, a fierce storm hit the city of Durban, leaving a trail of devastation across the city and surrounding areas. Authorities say the death toll has reached eight, but unconfirmed reports suggest that up to 14 people may have perished in the storm. Torrential rain and gale force winds ravaged many parts of the city, uprooting trees and damaging homes and hospitals.

The Daily Vox visited the Uganda informal settlement in Isipingo, in a part of Durban considered by many to have been hardest hit by the storm.

The Uganda settlement received a record 108mm rainfall. Residents are desperately trying to put their lives back together; reassembling homes, piecing together debris and drying their furniture. It is here, in the informal settlements, where damage from storm is likely to be longstanding. Phindi Ngema, 28, Isipingo, unemployed
I was forced to sleep in a toilet with my baby. It wasn’t a safe environment but we had to find shelter just to cover our heads. When we realised that the house was sliding down we tried to take out a few things but we couldn’t take out much. I merely took my baby and quickly ran to the toilet. We haven’t eaten since yesterday, even my baby hasn’t eaten much. We are living in a junk while our councillor watches us. There’s nothing we haven’t done, we’ve voted and protested but our lives never change. The kind of life we are living here is appalling because we are just poor people who have nothing. We called our councillor and he has since said he would come and see us but he hasn’t showed up.

The eThekwini Municipality released a statement on the day urging residents to stay indoors due to bleak weather conditions. We were in a classroom as normal when I started hearing a loud bang as though the house was moving sideways. I went outside to check what was happening and I saw a dark cloud and a downpour. I quickly went inside and tried to block water with rags but it was too powerful. We realised that the house was on the verge of falling down and we quickly moved out the kids and asked the nearby neighbour to keep them. It was like nothing I’ve seen before. We were all terrified. We are now trying to rebuild but most of the material was washed away. Nonkanyiso Simkani, 43, Isipingo, unemployed
All our belongings were washed away and the furniture got destroyed. I was in bed when I first heard funny noises and the next thing I knew, the back side of the house was down. I was lucky to even escape but I couldn’t save any of my valuables. What I witnessed [on Tuesday] was horrific. People were running around trying to save their belongings but the wind and rain were blowing hard. As shackdwellers, we have it really hard. Whenever storms hit the city it’s us who get affected the most. Meanwhile more people have been affected by the heavy rains. Sibongiseni Dhlomo, MEC for Health Department said that numerous hospitals were also affected, including King Edward and Prince Mshiyeni hospital. Pinky Math, 52, Isipingo, unemployed
We are left with nothing. The storm caused so much devastation for poor people like us and the sad thing is that we might be without shelter for days. Trees fell onto our houses and others were washed away by the heavy rain. Important belongings, including identification documents and certificates were also destroyed with furniture. We are devastated and don’t know what to do. We have no food and no shelter. I haven’t bathed or eaten anything since yesterday. I feel very sad for people with little children. I wish our government could hear our cries and help us out of this junk. This is no way for human beings to live. Sibusiso Ntanzi, 33, Isipingo, unemployed
[The storm] was crazy. A large tree fell onto our shack and it got destroyed all at once. We had to sleep out in the cold. We made a fire to keep ourselves warm throughout the whole night. It wasn’t just us but many of our neighbours were affected and had to sleep out as well, even women with little kids. It’s been 11 years of this pain and when we demand houses, we are constantly told to wait. What are we waiting for? To die in these disastrous storms? It hurts how we get to vote all the time but live like this in the end.