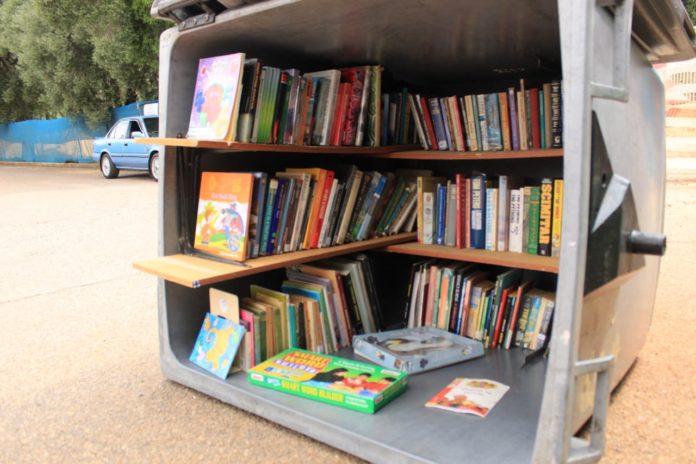 A thirty-three year old man from Mpendle in KwaZulu-Natal is using his passion for literature to break the inevitable cycle of illiteracy in rural areas, by donating books. In what started as a trash bin conversion into a class corner library has become a dream Ntokozo Ndlovu who works for the South African National Defense Force into a nationwide project, assisting rural communities with these libraries through his founded organisation, Web Foundation. He shared his story with the Daily Vox.

I was born and raised in Mpendle, KwaZulu-Natal; and later had to move to Durban due to political wars in my area. Growing up I always had a passion for literature and enjoyed being read stories. This was inspired by my mother who worked as a primary school teacher in the area.

What I do is influenced by my background. I have realised how children coming from rural areas struggle when they get to institutions of higher learning, and they have to adapt to a culture they are not familiar with, which is reading. If often becomes a problem for them to read large chunks of information and grasp it because they are not used to it.

I work with a team of matriculants who are unemployed and have decided to volunteer at the SANDF while helping with this initiative. At first, there was a trolley library project which was later innovated into bin libraries called ‘uMgqom’wolwazi’ (knowledge bin).

I was walking alongside one of Pretoria flats when I came across an empty trash bin and immediately thought of how it could be recycled into life again. That’s when I negotiated with residents of the flat and the bin was given to me and that’s how the idea has been growing since then.

Since the birth of Web Foundation back in 2015 we’ve received tremendous support from people willing to donate books; and we’ve also received calls from people reaching out for help with their own rural schools. We have helped many schools and continue to work tirelessly to keep the dream going across all provinces.

Since we are a self-funded organisation, we do seek support from good samaritans. We need donations of any kind: ranging from books, storages for the books, and a bakkie for transportation of books to rural schools would also be highly appreciated. Also, we would appreciate any kind of cash injection since I work with unemployed people who are so dedicated at keeping black children’s dream alive. However, our main priority is donation of books.

Our project has terms and conditions. For us to assist a school, it has to be a school fees non-paying school in a rural community and must have an available classroom they can give to us to convert into a library permanently. We rely on social media to reach out to masses and also have been assisted by word of mouth in ensuring that people and schools know about us and what we do. In the next few weeks we will be going to Eastern Cape to assist five schools.