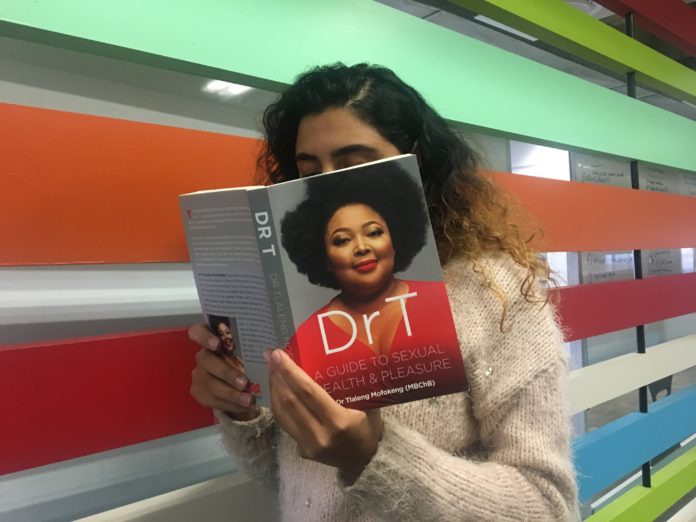 “I still can’t believe that it’s only been a week since we launched,” says Dr. Tlaleng Mofokeng affectionately known by most as Dr. T.  Sitting in the Pan Macmillan offices, Dr. T is still mic’d up. She had rushed for the interview from a television shoot. Mofokeng is a busy person. She is a doctor, writer, and health activist speaking about sexual health and pleasure. The Daily Vox team sat down with Dr. T to discuss her journey to writing her first book: Dr. T: A Guide To Sexual Health and Pleasure.

The book has been out for less than a month and is already on its second reprint. It has found its way to the United States, Amsterdam, India and all around the African continent. The book is a bestseller at many bookstores around South Africa. “It feels like this book has been on the shelves for six months. I’ve got nothing but gratitude,” says Dr. T. She says while she had hoped the book would be successful, she didn’t know the book would have such a huge impact.

“It’s completely mind-blowing. We are now receiving new books in a day from a reprint. Again it hasn’t even been a week. We’re talking bestseller OR Tambo, Cape Town International, Hyde Park. It’s a lot. It’s beyond my wildest dreams.

Where it all started

But Dr. T’s journey to writing this book started a while back when she was completing her medical community service. She says while she always wanted to be a doctor, she didn’t know initially she would be specialising in sexual health and pleasure.

Dr. T says she started off answering people’s questions around sexual health and pleasure just to give information. “I didn’t go into it with a plan,” said Mofokeng. Using Twitter, she would guide people especially young, black women in terms of where to get help and what to ask specifically when they get there.

She says she wasn’t just helping people with information. Instead, it was about helping people understand their rights. Dr. T was awarded the 120 under 40 New generation of Leaders due to her use of “social media to advocate for patient’s rights.” This was because Mofokeng used her platform to guide people when they faced stigma due to their age, sexual orientation and more at health facilities.

What’s the book about

Dr. T says she has a “definite recognisable sort of brand of sexual health and public health engagement.”  So while writing the book, she kept that tone and level of interaction in mind. “When I speak about sexual pleasure being a human right, I locate it within the issue of consent and being able to express yourself and enjoy sexual interactions without coercion and violence,” she said. It’s, for this reason, there is a special section on consent in the pleasure section of the book.

Mofokeng also made sure to incorporate different disease profiles in the country and how that affects people’s sexual health and pleasure.

The book is a personal journey for her as well though. For Dr. T the work surrounding women’s bodies, and around pleasure is a political issue. “The politics of the body is literally what gets me moving every day,” she said. It’s also deeply personal which is why the book is filled with references about her own growing up and her mother.

“I think that what this book is intending to do which is to say to women unlearn certain things society has told you about yourself and relearn new ways and assert yourself,” she said.

Who is the book for?

Dr. T says when she first started writing the book, she had the idea of a black woman between the ages of 20-23 as the target audience. However, while writing she realised that in South Africa regardless of gender, race, class, and location, many people had not received a quality sex education.

Dr. T says she has had Catholic priests tell her they are going to be reading her book and using it marriage counselling. This is something she would never have imagined.

What does Dr. T hope the book achieves

Dr. T says she hopes the book leaves people with more access to services and better understanding around sexual health. She also dreams of having the book translated into African languages.

“It would force us to interrogate why the names of genitalia in Sesotho and Setswana, Siswati, and IsiZulu give people such a negative response. But all of us can say penis and vagina and sing along to rap songs that are derogatory to women. The use of those words have such responses like you can’t say that,” she said.

Mofokeng hopes there is a normalisation of healthy sexual behaviour, consent, and using the proper names for people’s bodies.

“This book is part of my activism and advocacy towards gender equality,” she said.

The book as activism and advocacy

Dr. T says her book focuses on sexual rights because it’s important to remind “people why sex is political.” She hopes that if people unlearn and learn new ways of sexual interactions and consent, it would make for a better world.

“There’s where the advocacy part of the book comes through – to say yes we are here now and this is the book and this is why it’s important for you to take care of the well-being of all of the people,” she said.

Dr. T says after reading the book, she hopes people understand with LGBTQIA+ rights matter, why sex work is work and why women’s rights matter.

“Hopefully we can have a society that is more just-driven, more equal for people of gender and sexual minorities. That’s my aim. I want people who are marginalised for either extreme of age or gender or sexual orientation to live freely in the world,” said Dr. T adding: “If this book can do that for a few people, I think we would have done the work.”