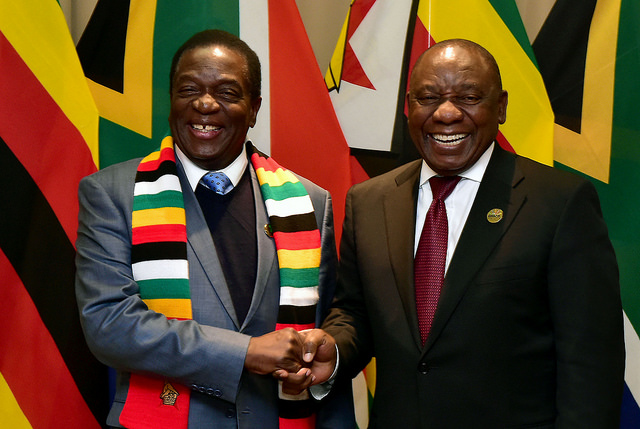 South Africa has come under a great deal of criticism for its response to the situations unfolding in Zimbabwe and the Democratic Republic of Congo (DRC). In both situations, the international relations and cooperation department (Dirco) have called for calm and the respect of the rule of law, whilst maintaining diplomatic ties with the very governments responsible for the violence in the first place. The Daily Vox takes a further look at South Africa’s baffling foreign policy decisions – with a focus on Zimbabwe.

Aditi Lalbahadur, the foreign policy programme manager at the South African Institute for International Affairs (SAIIA), spoke to The Daily Vox about South Africa’s response to Zimbabwe and how that relates to the country’s foreign policy.

The White Paper on South Africa’s Foreign Policy – written in 2010 – states a position of very clear values of human rights, democracy and the rule of law which the government uses as a basis for engagement with the rest of the world. The policy emerged from negotiations with various actors about the formulation of policy against a background of a “rapidly changing international relations environment, and the weight of rising expectations.” The paper, titled: ‘Building a Better World: The Diplomacy of Ubuntu’ uses the idea of a foreign policy grounded in cooperation and partnership rather than conflict and cooperation.

During the Nelson Mandela presidency, foreign policy was very much guided by adherence to human rights and democracy. While these values are still very listed as the guiding principles, under the leadership of subsequent presidents, the foreign policy has been very much about facilitating from the outside – instead of direct intervention.

During the presidency of Nelson Mandela, South Africa showed a much clearer commitment to human rights, democracy and the rule of law: after at first adopting a soft approach to the Nigerian dictator Sani Abacha, following the execution of Ken Saro-Wiwa and other activists, South Africa joined the international pressure on the military regime.

In 2002, South Africa showed commitment to its stated foreign policy ideology when, as a member of the Non-Aligned Movement – a group of states not formally aligned to any major power bloc – opposed the plans by the United States and United Kingdom to invade Iraq, under the now-thoroughly discredited excuse that the Saddam Hussein regime was developing and building weapons of mass destruction.

South Africa even sent specialists during that time to investigate Iraq’s potential weapons of mass destruction – many of the same people who had, under the apartheid regime, secretly helped build the Hussein regime’s chemical weapons programme. The South Africa report showed Iraq did not have any WMDs. This report – and Mbeki’s warnings were ignored by the United States and the United Kingdom.Â

“In reality [South Africa] is not always able to achieve all of those objectives because human rights and democracy are not apolitical issues. It has been a tricky thing for SA to balance what its values are versus how it is able to implement it on the ground,” Lalbahadur said.

Zimbabwe: How A Fuel Price Hike Sparked A National Shutdown

South Africa’s response to the current Zimbabwe crisis follows a pattern: Lalbahadur goes through some of this history. Starting from 2001, South Africa has played to varying degrees a mediator role within Zimbabwean politics – in response to political pressure from within, Robert Mugabe endorsed a policy of land seizures from white farmers. This, with international sanctions, caused an economic crisis which the country has never really recovered from. This all took place in the midst of the elections which ushered in a new political crisis for the ruling Zanu-PF.

In the aftermath of the 2008 elections, which had been won by the opposition Movement for Democratic Change (MDC), the SADC envoy and South African president Thabo Mbeki brokered a deal in which the legitimate winners of the elections would share power with the Mugabe regime, in a so-called ‘government of national unity’. Effectively, Mugabe and Zanu-PF retained control of the country. Mbeki was heavily critiqued at the time for preaching patience and “silent diplomacy” at the time even as the country descended into further turmoil under Mugabe’s leadership.

“In 2008, there was the culmination of South Africa’s greatest engagement when they facilitated a government of national unity between the ZANU-PF and MDC (Movement for Democratic Change). It was supposed to assist the government to come up their own reforms and assist them with moving forward and out of the crisis,” she said.

In the aftermath of the 2013 elections where Mugabe won a great majority of the votes, there seems to be less engagement from South Africa in the political ongoings of Zimbabwe. “The sense I got from people in government is that it is a Zimbabwe fatigue. South Africa’s policy with Zimbabwe is very much if they ask for assistance, South Africa will not refuse,” she says.

Lalbahadur is clear that South Africa would never intervene militarily into Zimbabwe for two reasons. Firstly the Zim government wouldn’t allow for military intervention from a government outside of its own.

“The reason that South Africa will not intervene militarily is that Zimbabwe for all of its faults is a sovereign state. South Africa has the belief that the crisis must be solved within Zim by its political actors,” she said. Lalbahadur added that the situation in Zimbabwe currently is not a military but rather a political/economic crisis which requires a political-economic solution.

Secondly, military intervention by one sovereign power into a sovereign country can only happen through a mandate from the regional economic body the Southern African Development Community (SADC) which is very unlikely

“It doesn’t mean the officials aren’t working behind the scenes to effect some change. It doesn’t mean the government is blind to what is going on the ground – it’s about not displaying a willingness to sort of air their dirty laundry in public,” Lalbahadur said.

Lalbahadur said the issue is very much an economic crisis, with the country struggling to attract foreign investment. Zimbabwe had massive debt and there are still many sanctions placed on the country. (Ironically, the latest protests started after a steep fuel price hike was announced – whilst President Emmerson Mnangagwa was on another one of his numerous overseas, money-raising junkets.) Many foreign powers including the United States and the United Kingdom placed sanctions on Zimbabwe following the 2001 ‘land grabs’ and the subsequent crackdown on citizens by the government.

On January 22, President Ramaphosa called for the sanctions to be lifted.

South Africa’s finance minister Tito Mboweni said Daily Maverick that South Africa is planning to extend short-term credit to Zimbabwe. He said South Africa could extend an existing credit facility which Zimbabwe had with the South African Reserve Bank. Last year, he shot down an R16-billion loan request from Zimbabwe.

Lalbahadur said for the South African government to offer the credit extension without any kind of political conditions on reforms would be irresponsible. “It would be possible to link that credit line with some kind of conditionality about transformation. That needs to be some kind of accountability and the best solution is some kind of political element included in the economic crisis,” she says.

The Democratic Alliance (DA) has once again criticised the “Quiet Diplomacy” policy, calling on Pretoria to ‘intervene’ and failing that – will be approaching to the International Criminal Court (ICC). Stevens Mokgalapa, the DA’s shadow minister for international relations and cooperation said to The Daily Vox that his party is not in favour of a repeat of the quiet diplomacy which was used in 2008 by Mbeki.

During an Economic Freedom Fighters (EFF) press conference on January 23, the party’s leader, Julius Malema said South Africa must contribute to the bailout of Zimbabwe and that the sanctions should be removed. “The only way to not have Zimbabweans in SA is to help them in their own country,” Malema said adding that a weakened Zimbabwe will lead to a weaker SADC region.

Lalhabahdur says if the DA does go to the ICC, it will be interesting to see how they explain what is happening in Zimbabwe under the crimes prosecuted by the ICC.

“There is no doubt that there are huge violations of human rights and that people are being brutalised and the state is acting in a very reprehensible manner at this point. The question of whether that constitutes a war crime or crime against humanity might be a bit too far,” she says.

In 2008 Lalhabadur said a lot of reforms was laid out – but have not been addressed even with the handover of power from Robert Mugabe to Emmerson Mnangagwa. “This is a good lesson for the whole world to realise – you just can’t vilify one individual. The problem is a systemic issue and the system needs to change,” she says.

“South Africa does try to approach it to say that the people who are part of the conflict need to be ones sitting at the negotiating table and need to the ones deciding the future of their own country,” she says adding that this approach makes it appear like the government is siding with people who are clinging to power and have reputations of corruption and rotten institutions.

“There needs to a kind of change and for South Africa to be able to follow through and to continue engaging in say Zimbabwe post the 2013 elections. Post-conflict reconstruction is not a five or 10-year project. It’s a fifty to sixty year project in the making but I don’t think we necessarily have those resources, Lalbahadur said.