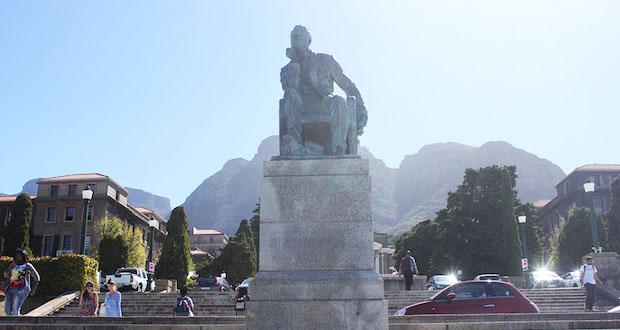 The #BlackLivesMatter protests across the United States which were reignited after the murder of George Floyd, a black man, wrongfully murdered by police officers, led to a global movement calling for the recognition of the humanity of black people. This takes place against the background of the COVID-19 pandemic which has glaringly exposed the inequalities in all societies; inequalities which have been created by a world economic system based on the exploitation of people that has a historical grounding in racialised capitalism.

As part of these protests, across the US, statues of the likes of Christopher Columbus, Winston Churchill, and Jefferson Davis have been toppled. In the UK, similar sentiments were echoed as protestors called for the fall of the statue of imperialist Cecil John Rhodes at the University of Oxford.

Reminiscing on South Africa’s Rhodes Must Fall protests — where the Rhodes statue was smeared with faeces and then removed from the campus — the last several years have seen the collapse of statues of men whose legacies have been built on the bones of indigenous people. From enslavement, to genocide, to the mass hoarding of wealth, good is not a word that one could attribute to these men. In defence to the removal from their pedestals you will find some asking the question: is this not an erasure of history? The same question that came up when Pretoria was to be renamed to Tshwane, or when street names in South Africa were to be changed. And the answer is simply: no.

History is not confined to a singular space that needs to be recounted with the boastful body of copper glaring down at you. It is not confined to the pages of a textbook. And it is most certainly not confined to the names of streets. No, history is in the truth and memory of a people. And the truth is, that these men are not worthy of being commemorated or celebrated — unless you wish to celebrate oppressors, and tyrants, and murderers. They should not be allowed to leer at you, nor occupy more space than they have, as their corruption is woven into the very fabric of society, entrenched in the system that is still racialised, classist, damaging.

That these statues still exist and are protected speak further to the bifurcated society that we live in: that there are still those who are human, who matter, who have rights. And that there are those who do not — whose daily lives struggle to survive, to stay alive, to be seen, and to be recognised as human. At this point, we must ask ourselves what kind of society are we that people must fight to be considered human? What kind of society are we that we celebrate killers? We put their names on plaques and halls and name our holidays after them. And names have meaning, they give purpose, and they define the space in which we exist. Why do we continue to allow oppression, even in memory?

The change of street names, parks, university halls to those who fell to colonialism tells a singular and universal truth: that the history of the oppressed is not like that of the oppressor. And though they tried to erase history by burying them in mass graves, stealing them away from their homes in the dead of the night, or letting them ‘hang themselves’, what they could not do is erase the memory of the oppressed.

Iram Yousuf is a PhD candidate in Legal Philosophy at the University of Pretoria, and a Mellon Foundation scholar.