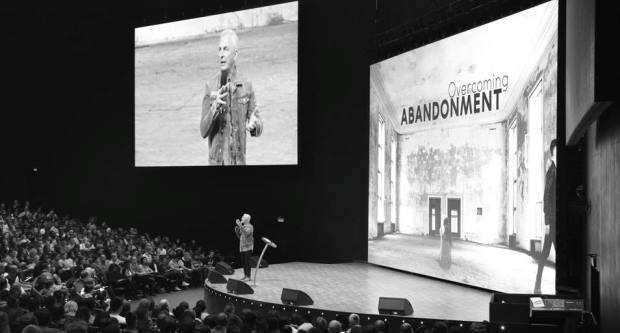 “If you are black God will send you white people. Don’t say the problem in South Africa is the white people. No, we are not. We have contributed to this nation, and we still do. If you want to know why white people still have money, it is because they work. So don’t drive them away. They can speak into your life.

“We took nothing from no one. Maybe the law favoured us, but we worked, and I am still working. And when you tell me I need to share my wealth, what are you suggesting?… Are you suggesting I give away some of it? Are you giving any of yours away? Excuse me?“

Listen to the above segment of Pastor Andre Olivier’s sermon here:

MUKOVHE MASUTHA believes the revelations of comments made by Rivers Church pastor Andre Oliver are proof of the way religion has been used to entrench white hegemony.

Not for one second was I shocked to hear that Rivers Church pastor Andre Olivier blessed congregants with an economics chapter wrapped in verses of religious hogwash. It is no secret that religion has been used and abused for centuries to justify the continued enslavement and subjugation of blacks in general and Africans in particular and it’s a shame that we continue to submit to this commercial hoax till this day.

Complacent and unsuspecting, we continue to legitimise this nonsense with the “One man for himself, God for us all” and “I worked my ass off to get to Sandton” mentality once we’ve become creditworthy enough to work and live amongst the settlers. We are now being sold the “American dream” of individual brilliance and success at the expense of our collective solidarity and modest way of living. Pastors live in opulence and have never seen in the history of mankind, which enables them to fly around and spread free economics lectures like the one delivered by Professor Andre Olivier.

Now back to the economics of it all. Not a single white settler of our land and all their intergenerational inheritors can ever claim to not have benefitted from 300 years of colonialism and 45 years of apartheid. In fact, all historical evidence suggests that European colonisers are the real inventors of economic, political, religious, cultural and violent terrorism!

In their quest to further amputate our consciousness, through a distorted/colonised curriculum and a corporatised higher education system, they teach us economics and finance geared towards protecting and justifying global and domestic economic and financial terrorism.

They preach to us the significance and benefits of globalisation and then turn around and Brexit to “take back control” and insulate themselves from “migrants”. Through cultural imperialism on our screens they belittle our identity and strip us of our dignity (Hlaudi has a point about 90% local content), and through LLBs they teach us how to “legally” navigate, protect and justify their world order as taught through the lens of Roman Dutch Law and other imported/imposed laws/opinions and inconsistent practices at the International Criminal Court.

Perhaps more telling is how, with a few exceptions, social origins seem to continue to determine social destinations, regardless of your qualifications. Chris Hart dropped out of Wits University twice and still became chief economist of Standard Bank, presiding over interns with M Coms but no “experience” and Minister Des Van Rooyen, despite holding an MSc in Finance from University of London, was deemed not qualified enough to be Minister of Finance but a builder once was. Hell, it’s so bad some finance graduates from “prestigious institutions” blamed currency fluctuations this week on President Zuma, despite that fact that markets, aka thugs from Wall Street and elsewhere in the world, were simply reacting to Brexit.

While we are still on the markets, I wonder how much our treasury paid Moody’s in order to avoid a “downgrade”. Bought? Yes, Moody’s and S&P are well known for taking large sums of money in exchange for better economic rating in order to shift political outlooks and facilitate regime change on behalf of Western governments, hence John Perkins using the term “economic hit man” to refer to them. In protest, countries like Russia have established their own ratings agencies. Importantly, we can’t forget how these very ratings agencies gave many Western economies higher ratings a few weeks before they all collapsed in 2008, taking along with them a plethora of countries they continue to financially colonise through bankers or bankstars, depending on who you ask.

This is not just my opinion, it’s all captured very well by John Perkins’ New Confessions of an Economic Hit Man, Noam Chomsky’s Who Rules The World, and Stephen Goodson’s Inside the South African Reserve Bank: Its Origins and Secrets Exposed (Goodson is the former director of the South African Reserve Bank). Quite markedly, if you intend to understand the true origins of “Nenegate”, free from media propaganda, go and read Barry Sergeant’s The Assault on the Rand. Sergeant exposes how in 2001, due to compromises made in 1994 and the post-cold war global preponderance of the neo-liberal regime, the banks, working with companies like Sasol, manipulated and looted the rand currency and when caught, they agreed to reverse transactions worth billions back into the South African economy without admitting guilt. The whole matter was subsequently swept under the carpet in 2002.

Through mainstream media, they distort how far we have come as a people in order to perpetuate the spirit of hopelessness and fuel chaos. Through TV, we are sold unrealistic materialistic dreams and when we wake up the following morning a free RDP house is no longer good enough. A materialist culture is sold to us so that we abandon the collective way of life and adopt individualism. Through teachings of the “free world”, we no longer have volunteers of Tambo, we have become political clients and our vote is for sale. Once they successfully divide us, and it seems likely, they will ultimately conquer us all and cut our throat on live television. If you don’t believe me, ask Saddam Hussein and Colonel Gaddafi.

Back at home, just before the 2010 Soccer World Cup, construction companies owned by inheritors of colonial wealth and friends stole what the Mail and Guardian reported to be an estimated R14 billion (ie 70 Nkandlas) (ironically in construction) through what mainstream media later called collusion, not corruption, and not a single soul went to jail.

We have had our fair share of mistakes since 1994 but let that not blind us to the strategic systemic and structural economic war on Africans presided by white males and justified by priests with no shred of credibility or moral ground. White males and priests who, without any form of redistributive justice, want us to forgive and forget their perpetual economic sins. We must never!

The land and everything beneath and above it must be taken by redistributed from settlers and given back to its rightful owners. Pastors must leave Jesus out of it!

Editors’ note: Rivers Church has released a response to the controversy. You can read it here.