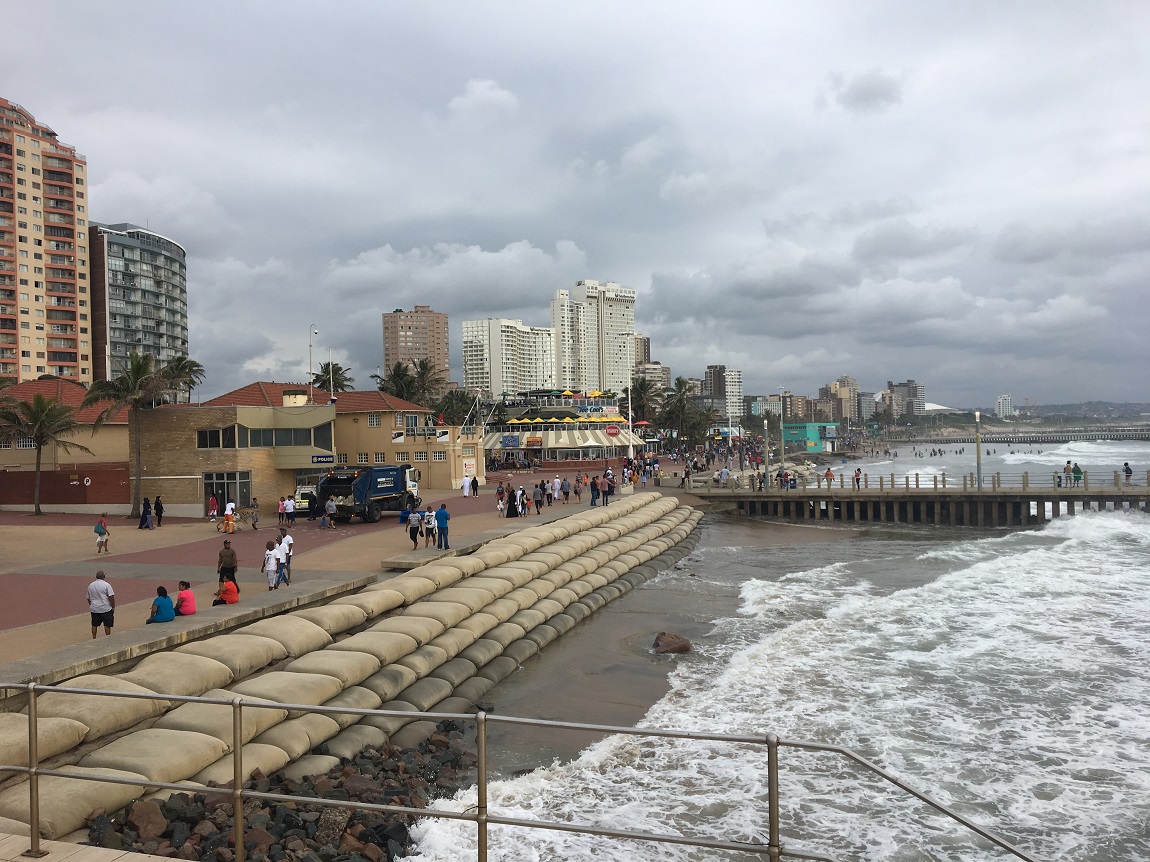 The Durban beachfront is one of South Africa’s most iconic attractions. The kilometers-long promenade, sandy beaches, and warm Indian ocean makes it a popular tourist destination. However, in recent times, something very serious seems to be happening to Durban’s beaches. Conservationists and environmental activists have raised concerns about them. The Daily Vox team takes a further look at what is happening.

Visiting the Durban beachfront, it’s not difficult to see that something is amiss. At high tide the water level almost reach the walkway while many of the beaches have been closed for bathing. Huge sandbags dot those coastlines, preventing the water from reaching further.

In an interview with The Daily Vox, environmental consultant and oceanographic specialist Lisa Guastella said that the issue with Durban’s beaches is the infrastructure responsible for pumping sand onto the beaches has not been maintained.

Guastella said that before the harbour was built in Durban, sand would come in naturally and replenish the beach. However, when the harbour was built sometime in the 1800s, the natural system of the longshore drift was disturbed. This means that Durban has to rely on the artificial sand which is supplied by Transnet.

There used to be quite an efficient system which used to pump sand are towards the northern beaches said Guastella. However, the problem is that “there has been no maintenance of the infrastructure and it’s fallen apart. No one from the municipality has maintained it,” she said.

Guastella said the northern harbour pier has also been moved, which could have changed the dynamics. But essentially sand is being pumped but there hasn’t been the infrastructure to get it further north to the central and north beaches. It is getting to the southern beaches but it is not going further north.

Another issue Guastella says is that there were huge upgrades to the Durban promenade for the World Cup and the municipality was warned that with climate change and rising sea level, upgrades would not be enough and that the project would need to be maintained.

EThekwini Municipality head of communications Tozi Mthethwa told The Daily Vox that the municipality is aware of the erosion of sand problem facing the coastline. “Sand capacity on our beaches has been affected by the recent inclement weather changes associated with climate change, coupled with over-mining of sand,” she said

Mthethwa says the municipality has employed the following strategies to deal with the problem, including writing to the national department of mineral resources to request for a meeting aimed at tightening regulations on the issuing of sand-mining permits. They are also deploying law enforcement to ensure that sand-mining regulations are adhered to.

The main strategies are an engagement with Transnet Dredging Services to seek the most efficient manner to replenish the beaches on an emergency basis with the recommendations of using a temporary offshore pipeline with the dredger discharging sand directly onto the beach.

Mthethwa said they plan to nourish the central beaches via the offshore pipeline using the dredger to directly discharge onto the beaches and are hoping to commence operations in the next three to four weeks. The operation is expected to last a month.

According the municipality, they have managed to replenish 100 000 cubic metres to 250 000 cubic metres up to Addington Beach using the main diameter pipe. However, they are awaiting the construction of Transnet Hopper station which will help with the sand for a much more consistent sand supply.

With regards to the forthcoming high tides, Mthethwa said measures have been put in place to protect the infrastructure and to warn the public ahead of beach closures.

Environmental activist Desmond De Sa is quoted in IOL as saying that the attempts to re-engineer the beaches will not work in the long run and that pumping sand is only a temporary solution. “They got rid of all the vegetation and now there is nothing to hold the beaches together. Nature has its own course and no amount of concrete can stop it,” he said.

Editor’s note: parts were added to clarify on some points regarding the pier’s influence on the flow of sand.