The video of a baby being ripped from the mother’s arms by police officers in Cape Town horrified and disturbed most people in South Africa and around the world. For the past few weeks, a group of refugees, and immigrants staged a sit-in at the United Nations High Commissioner for Refugees (UNHCR) offices in Cape Town and Pretoria. However, on Tuesday, operating from a court order, police forcibly removed the refugees in Cape Town. The Daily Vox team spoke to one of the sit-in leaders Papisse Sukami.

We started on the 8th of October at the same time in Cape Town and Pretoria. We were asking to be moved out of South Africa because of xenophobia. [As a result of] the xenophobia our community is no longer safe. Every year when the xenophobia starts, we are dying and no one is punished for killing the foreigner.

Now the worst thing for me is the officials are calling for hatred and xenophobia. There are messages on social media saying they are going to kill [foreigners] in 2020. Now even in Cape Town where there was a low rate of xenophobia […] now our people are dying. There is a high rate of our people dying and that’s the reason we came to the UNHCR.

We are asking them to move us out of South Africa even if it’s to Namibia, Zimbabwe or Zambia. But we are no longer safe in South Africa. That’s the reason for our protesting.

But what started yesterday was the law enforcement – the way they used the violence was shocking. Many people are in the hospital. From 9 am to 3 am today, they haven’t received treatment. They say there’s no medication. Some of them get hit by the real bullets and others by the rubber bullet.

Until now the UN is telling us to move. They said they can only move a few numbers of us. We told there are 65 000 immigrants and foreigners in South Africa. We are more or less 700 people so why can’t they help these people out. The Methodist Church hosted us yesterday after that we don’t know.

Yesterday we found that not only are the South African people xenophobic but also the police. You can see that from the way they came with all the force to remove us from that place.  In the parliament yesterday we were engaging in a dialogue with a spokesperson and a member of parliament and then suddenly they sent these people to kill us.

People who were living yesterday are sick now. There are even some babies that are missing. They took some babies from the mamas and didn’t bring them back. We don’t know where are our children.

The thing is we fear that the genocide is coming in South Africa. For more than 10 years, we’ve suffered the xenophobia in this country. They are going to kill all of us. That’s why we came to claim our rights. It’s a right in the Convention of Geneva. If you are not feeling safe in a country, you have the right to ask to be moved to another country.

We are suffering in our country. We have human rights violations in our countries. That’s the reason why we came here. But they move away from us. That’s why we decided to come to the UNHCR in South Africa to ask them to move us out of South Africa.

Most South Africans are xenophobic. We see xenophobia everywhere. It wasn’t there in Cape Town and the Western Cape but now we see it there as well.

We are no longer safe in South Africa. That’s the reason we want to leave this country. We are going to leave jobs, the shops, and the women. We just want to want to go out. We will ask the people of South Africa to ask the government and the UNHCR to bring us out of South Africa.

Speaking to Radio 702 the UNHCR’s South African spokesperson Helene Caux says relocating aggrieved refugees and asylum-seekers to other countries is not possible. In Tshwane, the City has called on the government to help address the concerns and demands of the refugees. 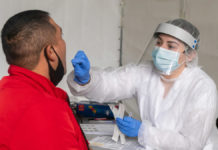 What vaccine hoarding will mean for international travel